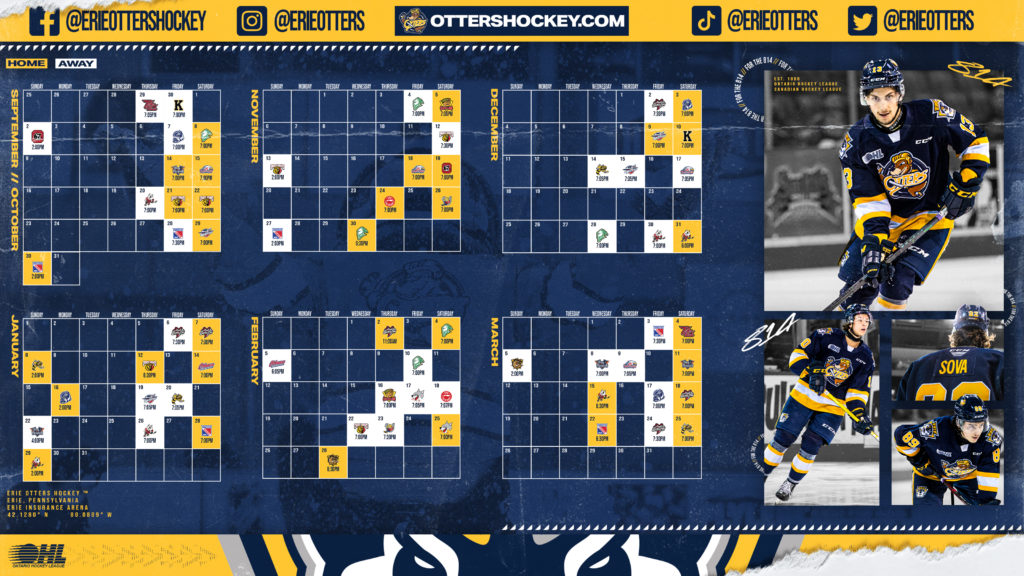 Erie, Pennsylvania – After the announcement of the Ontario Hockey League’s 20 Opening Nights for the 2022-23 season on Tuesday, the league announced today the entirety of the schedule for all member teams. With all 68 games (34 home, 34 away) finalized, the Erie Otters look ahead to the 26th season in downtown Erie.

Unlike the 2021-22 season’s road-heavy start and home-heavy backend, the Otters will play a relatively consistent number of home games during each month of the year – with the season running from the last week of September until the fourth week of March. While playing at least one home game on every weekday during the season, the team will host 19 Saturday home games – allowing for the most convenience for fans from all-around to enjoy a weekend game. Another convenience-based change for the Otters’ 2022-23 season is a new 6:30 P.M. start time for non-weekend game days (Monday through Thursday). This change was made to allow for families to be able to enjoy a night of Otters Hockey without having to stay out too late on a work/school night.

General Manager Dave Brown spoke on behalf of the fans following the announcement of the schedule in its entirety, praising their backing and support.

“Entering the 26th season is truly a testament to the perseverance and passion the Erie Otters fans provide, and something we don’t take for granted.” said Brown, “We are excited and looking forward to increasing our fan following to all new highs and entertaining everyone with a young, energetic group that reflects the values of our Erie community and fans.”

Season 26 of Otters Hockey starts the last week of September in cross-conference play, helping to home-open for the Peterborough Petes (Sep. 29), Kingston Frontenacs (Sep. 30), and Ottawa 67’s (Oct. 2), before closing out the four-game road start in Mississauga on Friday, Oct. 7.

As revealed on Tuesday, the Otters’ Home Opener is Saturday, Oct. 8 at 7:00 P.M. against the Midwest Division foe and rival London Knights. Erie plays an additional six home games in October – all against Western Conference foes and all on weekend dates.

November sees the start of the holiday season, and the return of a long-standing tradition of Hockey in Erie – the 47th Annual Thanksgiving Game, as the team hosts the Sault Ste. Marie Greyhounds for the second year in a row. Before that begins, Erie hosts North Bay on Saturday, Nov. 5 as the first Eastern Conference foe in Erie for the season – with Ottawa and Barrie on ensuing Saturdays. The final home game against London comes on the last day of the month on Wednesday, Nov. 30 at 6:30 P.M.

The 2022 portion of the schedule comes to an end with the first road-heavy month in December, as the Otters play six of their 10 games on the road. Erie’s four home games will feature three Eastern Conference foes, and four Saturday games – including the long-awaited return of the New Year’s Eve Game with a special 6:00 P.M. start time against Niagara.

February won’t see the Otters much at home, as Erie opens and closes the month in the Erie Insurance Arena, but sees seven-straight on the road between the open-and-close of the month. Erie will play its only Tuesday home game of the season when it hosts the Hamilton Bulldogs (also for the only time) on February 28.

The final month of the regular season closes out strong, as Erie plays four Saturday games, including the final four games coming against Western Conference foes.

Senior Vice President of Business Operations Chad Westerburg spoke with great regard on what a return to normality through the game of hockey means, and his excitement for the team’s 26th Season

“In recent years where there have been hardships hit across the region, we are excited to return to normal and provide the Erie community with family affordable entertainment.” said Westerburg, “As we approach the new season of Otters hockey, fans should expect new giveaways, fun and exciting promotions, and theme nights. We are pleased with our schedule for this upcoming season as we look to host 19 Saturday home games. I encourage all sports fans to show support this season and prove why we have the best fans in the league.”

The full promotional schedule, including day-specific themes, theme nights, and giveaways will be released in the coming weeks by the organization.

Home Games per Day of Week:

Home Games (and total) against Teams:

The Otters organization is ecstatic to return hockey to downtown Erie for the 26th season, and reignite the best fan base in the OHL in pursuit of a return to the playoffs.

For the complete 2022-23 Otters schedule, head to OttersHockey.com/schedule or on OntarioHockeyLeague.com.