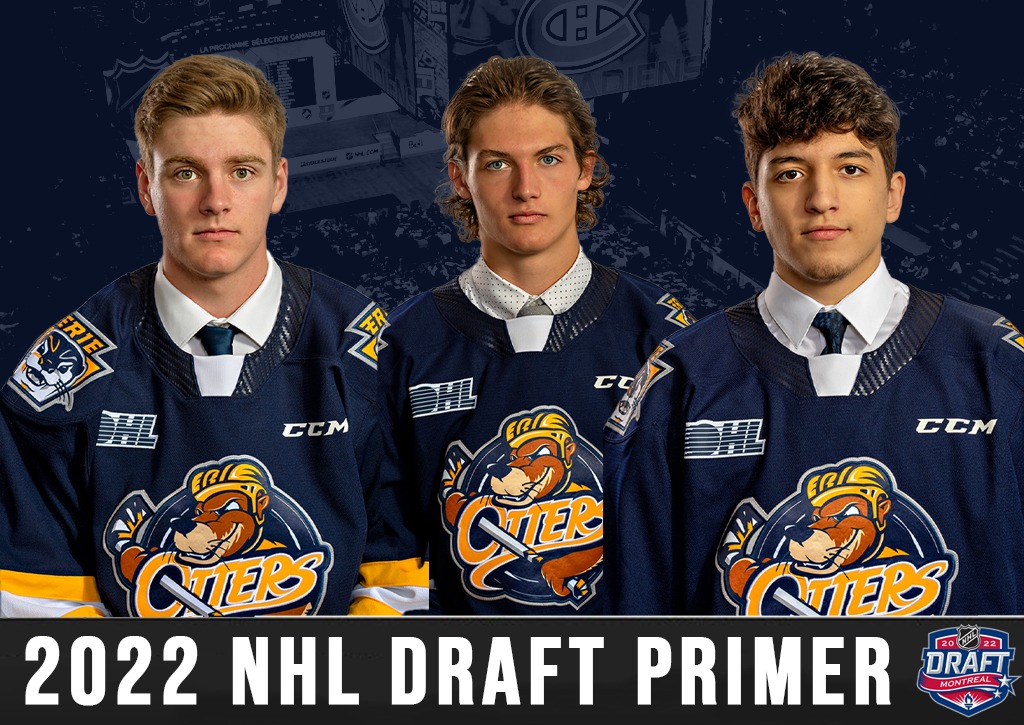 Erie, Pennsylvania – The end of the Memorial Cup and Stanley Cup playoffs marks the start of the most-anticipated weekend for aspiring professional hockey players, the National Hockey League’s Entry Draft. From the anticipation of first-round prospects, to the silent prayers of players hoping to make the cut, the weekend means something different to every player participating.

The Erie Otters have seen great success developing talent for the NHL Draft in the over 25-year history of the organization on the shores of Lake Erie. Over that time, 42 Otters have heard their names called at the NHL Draft, including 11 first-round picks and a five-year streak of first rounders from 1997-2001. Connor McDavid remains the only first overall pick in team history – a feat only eight OHL teams can boast – when the Edmonton Oilers took the hockey prodigy to open the 2015 NHL Entry Draft. 2007 highlights the Otters most successful draft with five players chosen: Nick Palmieri, Anthony Peluso, Luke Gazdic, Zack Torquato, and Josh Kidd.

With the forthcoming 2022 NHL Entry Draft on July 7 & 8, the expectation is for that number to rise to 21 as three Otters names are circled on scouts’ sheets. Those three players – all recognized on NHL Central Scouting’s Final Rankings – are Christian Kyrou (#48), Spencer Sova (#80), and Nolan Lalonde (#14G).

“It’s been surreal, not a lot of people get to come here. It’s exciting” said Kyrou, “[It’s been a] lot of development the past years, I worked hard. [I’m] just grateful for the opportunity I had.”

A true-to-the-definition breakout star in the 2021-22 season, Christian Kyrou set the OHL on fire as an offensive-defenseman in his first full season. The #84 overall pick in the 2019 OHL Priority Selection Draft, Kyrou ranked 48th among all North American Skaters in the NHL Central Scouting Final Rankings. After not previously appearing on any of the season’s NHL Central Scouting ‘Players to Watch List’, Kyrou’s consistency and growth through the first half of the season had put him on the Scouts’ radar at the Midterm Rankings, earning him 179th overall.

A dynamic sophomore season, Kyrou grew from an undiscussed, rotation Defenseman to a star-studded 200-foot player with game-changing ability. Finishing top three in scoring among all OHL Defenseman, top-50 in the entire league, and top-3 on the team, Kyrou’s breakout season earned him a top-50 ranking for the upcoming draft. The 18-year-old defenseman appeared in every game this season for Erie, ranking third in team-scoring (1st among Defenseman), 3rd in the OHL for defensemen in scoring with 60 points (18G+42A). He was also named to the Canadian Hockey League ‘Team of the Week’ in early February.

In the first running of the NHL Scouting Combine since 2019, Kyrou was one of 96 players – just 30 defensemen – selected to partake in the weekend’s activities. A fantastic running of the Combine allowed for Kyrou to catch the eye of many scouts, especially for his speed, where his pro agility times were among the top of all prospects in attendance. All the chips are falling at the right time for Kyrou, as the budding star is a projected Second Round pick.

“My goal has always been to play in the NHL.” said Sova, “I hope the opportunity presents itself.”

A highly-touted prospect coming into his first OHL season, Windsor, ON native Spencer Sova immediately left his mark on the Otters defensive corps., running point from the blue line from game one.

The #8 overall pick in the 2020 OHL Priority Selection Draft, Sova ranked 80th among all North American Skaters in the NHL Central Scouting Final Rankings. The 17-year-old defenseman appeared in 64 of 68 games this season for the Otters, running the power play, and being part of the top ‘D’ Pair. Sova was a top-10 scorer on the team and top-40 scorer amongst all OHL Defensemen with 28 points (9G+19A) including four PPGs.

Internationally, Sova was named an Alternate Captain for Canada’s National Men’s Under-18 Team at the 2022 IIHF U18 World Championship, and was a point-per-game player for Team Canada with three assists in three games.

“It’s a huge honor to be ranked for the Draft.” said Lalonde, “This is a dream of mine that I’ve had since I was a kid; to see that be closer to being realized is amazing.”

Baptism by fire was the theme of the rookie season of goaltender Nolan Lalonde, who was put into the position of every-game-starter before the start of the season. From the unexpected opportunity, came an evolution of a goaltender to the top among rookies.

Lalonde, originally hailing from Kingston, ON, was the 49th overall pick in the 2020 OHL Priority Selection Draft. Appearing in 54 of Erie’s 68 games this season, with an .877 SV%, 3.62 GAA, and a 24-25-2-1 record, Lalonde’s 24 wins were top among all rookie goaltenders, t-7th in the OHL, and second all-time amongst Otters rookie netminders – second only to Erie’s 2004 NHL draftee Josh Dishner. Lalonde earned honors as the OHL’s All-Rookie First Team Goaltender, as well as being named Midwest Division Academic Player of the Month honors from the OHL in November.

Internationally, the 17-year-old Lalonde was named a Goaltender for Canada’s National Men’s Under-18 Team at the 2022 IIHF U18 World Championship – playing alongside Otters’ teammate and fellow draft candidate Spencer Sova – starting one game and getting Team Canada’s lone-win in net.

Since 1969, the OHL has had 2,379 players selected to the NHL, representing 20 percent of all players ever selected in the NHL Draft.

Keep up with both of the Otters picks and results on OttersHockey.com or across the Otters’ social media. For all results of the 2022 NHL Entry Draft, please head to NHL.com.