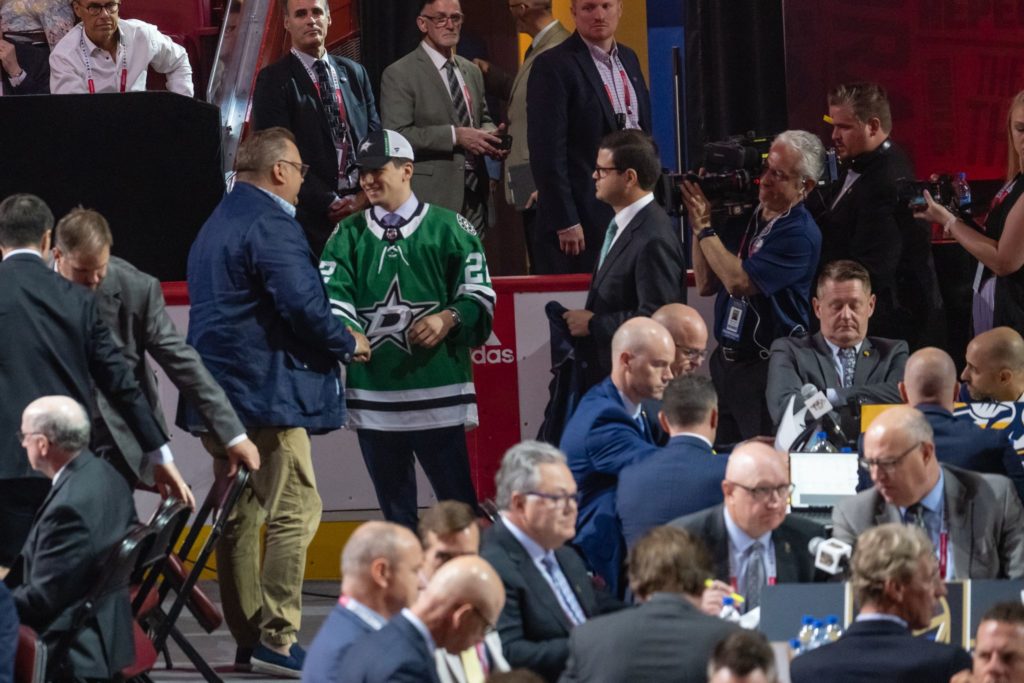 Erie, Pennsylvania – The pick is in, and the Erie Otters once again are represented at the highest level – seeing a player taken in the 2022 National Hockey League Entry Draft.

Defenseman Christian Kyrou, taken #50 overall (2nd Round) by the Dallas Stars, is the highest-picked player from the Erie Otters since Jamie Drysdale was taken 6th overall in the 2020 NHL Entry Draft – and the 16th Otters’ player all-time to be drafted in the top 50. Kyrou – joined by brother and NHLer Jordan and family – became the second player taken by Dallas in the 2022 Draft, and the second Otter to ever be drafted by the Stars, joining 2007 NHL Entry Draft #172 overall Luke Gazdic.

The Erie Otters have seen great success developing talent for the NHL Draft in the over 25-year history of the organization on the shores of Lake Erie. Over that time, 43 Otters have heard their names called at the NHL Draft, with the selection of Kyrou representing the Otters organization having heard at least one players’ name called in 21 total drafts from 1997 to 2022. Kyrou joins teammate Connor Lockhart as currently rostered Otters drafted by an NHL club. Erie General Manager Dave Brown spoke highly of the moment for the Defenseman.

“We are thrilled to share in such an exciting moment with Christian. Being drafted by an NHL team is an honor he’s earned and worked so diligently to attain.” said Brown, “We are happy for Kyrou and his family.”

A true-to-the-definition breakout star in the 2021-22 season, Christian Kyrou set the OHL on fire as an offensive-defenseman in his first full season. The #84 overall pick in the 2019 OHL Priority Selection Draft, Kyrou ranked 48th among all North American Skaters in the NHL Central Scouting Final Rankings. After not previously appearing on any of the season’s NHL Central Scouting ‘Players to Watch List’, Kyrou’s consistency and growth through the first half of the season had put him on the Scouts’ radar at the Midterm Rankings, earning him 179th overall.

A dynamic sophomore season, Kyrou grew from an undiscussed, rotation Defenseman to a star-studded 200-foot player with game-changing ability. Finishing top three in scoring among all OHL Defenseman, top-50 in the entire league, and top-3 on the team, Kyrou’s breakout season earned him a top-50 ranking for the upcoming draft. The 18-year-old defenseman appeared in every game this season for Erie, ranking third in team-scoring (1st among Defenseman), 3rd in the OHL for defensemen in scoring with 60 points (18G+42A). He was also named to the Canadian Hockey League ‘Team of the Week’ in early February. Otters’ Head Coach BJ Adams gave praise and credit to Kyrou on his journey.

“I’m very excited for Christian.” said Adams, “He put in a lot of hard work on-and-off the ice over the past couple of years and it paid off for him.”

Scouting report from NHL Central Scouting on Christian Kyrou
“A dynamic right-shot defender with high-end offensive instincts and ability. Strong skater with excellent mobility. Drives the play and has end-to-end puck rushing ability. Sees the ice very well and advances the puck to proper outlets. Excellent shot and release. His game has rounded into a two-way type defender with game-breaking ability. A power-play quarterback with outstanding point production from the back end. One of the most improved prospects this season from start to finish.”

The entire Erie Otters organization congratulates Christian Kyrou on his accomplishments and recognition, and look forward to his continued development on the road to his professional hockey career.

While not a member of the Erie Otters, an honorary congratulations to the team’s 2021 CHL Import Draft pick Juraj Slafkovsky, who was selected 1st Overall by the Montreal Canadiens – the first Slovakian with the honor.

Keep up with the Otters pick and results on OttersHockey.com or across the Otters’ social media. For all results of the 2022 NHL Entry Draft, please head to NHL.com.