Attack Pull Ahead In Standings After Defeating Otters 5-3 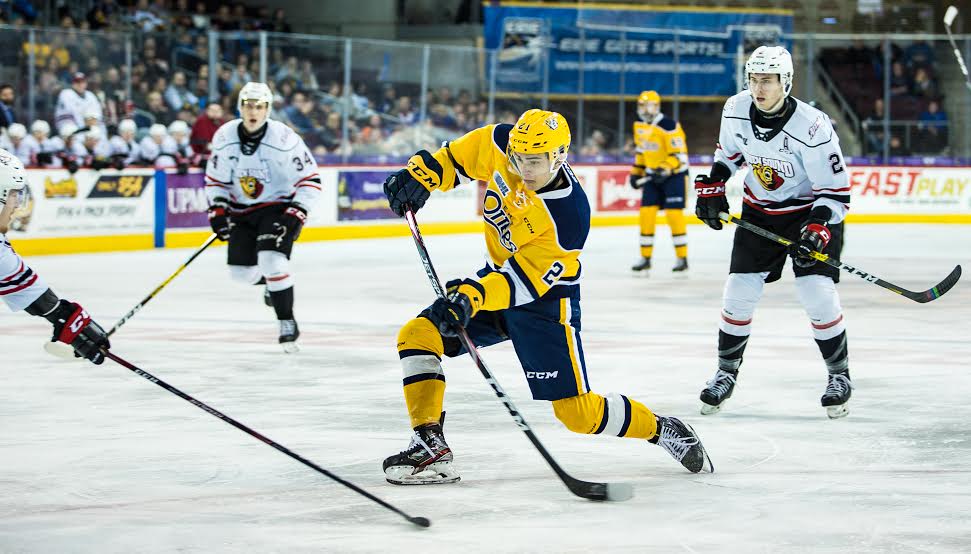 Erie, Pennsylvania – The Erie Otters fell 5-3 to the Owen Sound Attack, who moved into sixth place in the Western Conference with their win at the Erie Insurance Arena Saturday.

Owen Sound took the lead just past the halfway mark of the opening frame when Sergey Popov collected his own rebound and scored his first goal of the game. With under six minutes left in the period, Kurtis Henry used his stick to break up a two-on-one chance against the Otters. The Attack continued to push, and Barret Kirwin scored at the 17:26 mark to give Owen Sound a 2-0 lead heading into the intermission.

The Otters came out of the intermission by scoring two goals in less than three and a half minutes. Austen Swankler passed the puck to Chad Yetman, who fired a shot past the blocker side of Owen Sound goaltender Mack Guzda at the 1:49 mark of the frame. Minutes later, Swankler fed the puck through bodies in the neutral zone and sent Maxim Golod in all alone on Guzda. Golod showcased his nifty stick-handling skills before potting his 18th goal of the campaign with five minutes gone. Later in the period, Yetman entered the offensive zone with speed and took a shot that trickled behind Guzda at the 16:38 mark to give the Otters a 3-2 lead. Owen Sound did not give up, and Popov scored his second of the game with two minutes and 36 seconds remaining in the middle stanza.

The Attack reclaimed the lead when Adam McMaster deflected in a shot eight minutes and 22 seconds into the third period. Kaleb Pearson added an insurance goal with 93 seconds remaining in the game to secure the victory jumping Owen Sound two points ahead of Erie in the standings.

The Otters western conference schedule continues as they make their first trip to Michigan next weekend with their first meeting of the season with the Flint Firebirds Friday, January 31st.