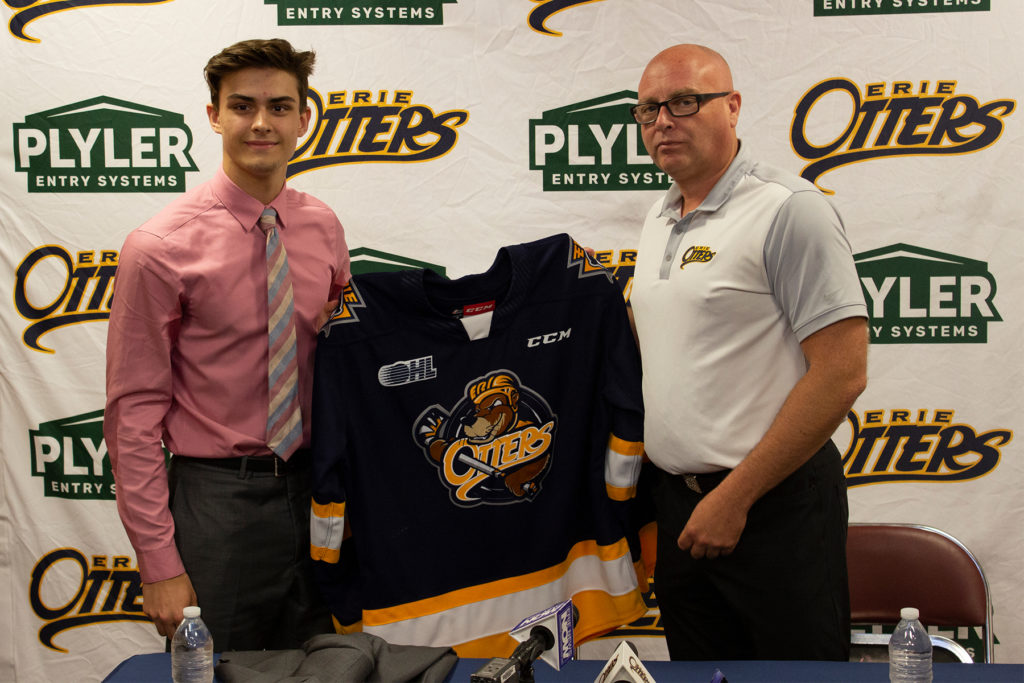 Erie, Pennsylvania – Erie Otters Hockey Club General Manager Dave Brown announced today that forward Austen Swankler, whose rights were acquired from the Ottawa 67’s in a trade this past January, has committed to the team and completed an Ontario Hockey League Standard Player Agreement.

“It’s an exciting day for the Erie Otters to add another player from our neighborhood with Austen committing to the team and joining the organization from the Pittsburgh area,” said General Manager Dave Brown. “Austen was an important part of making that trade with Ottawa last year and we weren’t willing to make the deal without him. I had the chance to watch Austen while he played in Oakland with the U16 Grizzlies; he was tenacious, eager, hard on pucks and those are the things we saw a lot of last year from him. We’re thrilled to welcome the Swanklers to the Otters family.”

Swankler, a 6’0”, 181-pound forward, spent the 2018-19 season in the United States Hockey League beginning the year with the Waterloo Black Hawks before a November trade sent him to the Sioux Falls Stampede. The 17-year-old posted 45 points (12G-33A) in 59 games played between the two organizations and added two goals and an assist in ten playoff games with Sioux Falls on the way to a Clark Cup victory as USHL Champions. During the playoff run with Sioux Falls, Swankler cemented himself in USHL Tier 1 history by scoring the game winning goal to end the longest game in league history (122 minutes and 57 seconds) when he scored 2:57 into the fourth overtime to advance the Stampede into the Western Conference semifinals.

“It’s pretty amazing, it’s surreal,” Swankler said of joining the Otters organization. “I couldn’t say that any other experience would be better than playing in Erie. Being close to home and playing for such a good organization and good coaching staff, I’m lucky as a 17-year-old to be able to play in this league with some of the best hockey players and play in Erie with such a rich history. It’s unbelievable.”

Originally selected 59th overall in the third round of the 2017 OHL Priority Selection by the Ottawa 67’s, Swankler’s draft rights were acquired by the Erie Otters along with draft picks for overage captain Kyle Maksimovich at the 2019 trade deadline. The North Huntingdon, Pennsylvania native is a graduate of the Pittsburgh Penguins Elite program, as well as the Oakland Jr. Grizzlies where in 2017-18 he led the Midget squad in scoring with 101 points (38G-63A) and was a teammate of current Otters defenseman Brendan Kischnick.