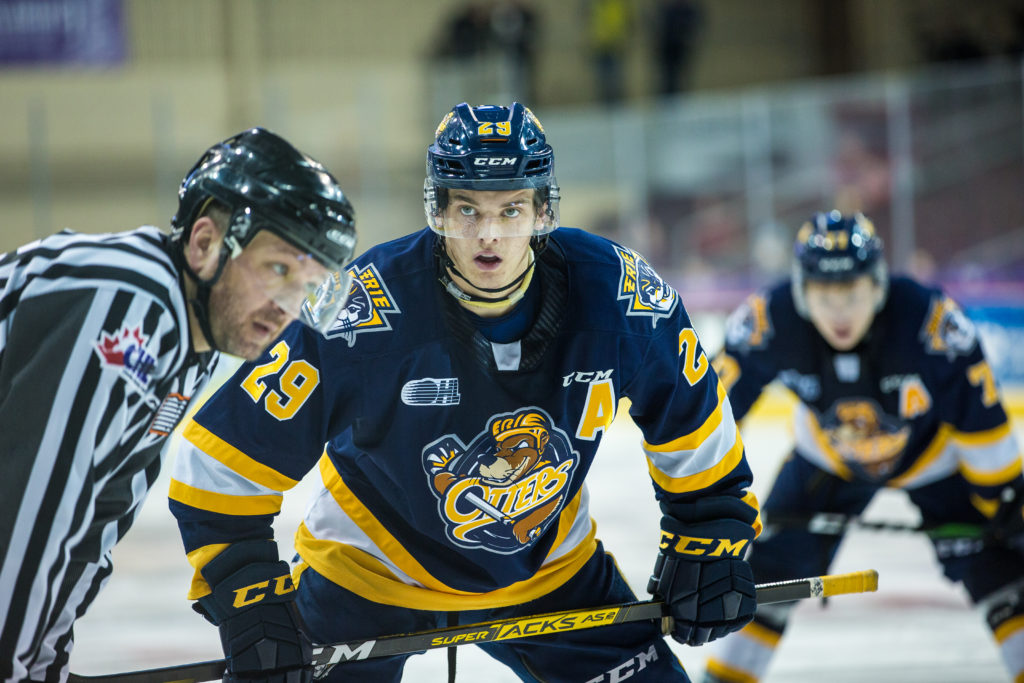 Erie, Pennsylvania – The Erie Otters rallied with two goals in the third but ultimately lost 5-4 to the North Bay Battalion at the Erie Insurance Arena Saturday night.

The Erie Otters jumped to a 1-0 lead four minutes and 39 seconds into the game with a powerplay goal. Maxim Golod and Chad Yetman set up Jacob Golden, whose point shot found the back of the net through traffic. Just over eight minutes later, David Campbell scored on a rebound to the left of Aidan Campbell to make the game 1-1. Austen Swankler baited North Bay goaltender Cameron Lamour into moving from right to left and sent the puck across the slot for Elias Cohen. Cohen scored through a packed crease to take control of the game for Erie. With one minute and 59 seconds left in the opening frame, Brandon Coe evened the game 2-2, a score that would hold into the intermission.

North Bay took over in the middle stanza, scoring two minutes and 19 seconds in. Liam Arnsby went streaking down the left side of the ice and scored on a breakaway without breaking stride to make the score 3-2. Minutes later, Swankler had a glorious opportunity alone in front of Lamour, but the goaltender lunged forward to make a point-blank stop. Simon Rose added to the Battalion lead when his shot from far out found the back of the net at 7:31. Shane Bulitka scored a short-handed goal on an odd-man rush to make the score 5-2 heading into the third.

The Otters jumped out to a promising start with Yetman tallying an unassisted, breakaway goal over the glove of Lamour just 17 seconds in. Golod pulled the Otters within one just one second past the halfway point of the third period. Yetman fed the puck to Golod in the slot, and after momentarily losing control of the puck, Golod fired it in the net off a spin-o-rama. Erie pulled the goaltender to get an extra-attacker out late in the third, but the Battalion held on to the 5-4 decision.

The Erie Otters will hope to get back in the win column when they host the London Knights in a 2 p.m. matinee Sunday, March 1 at the Erie Insurance Arena.