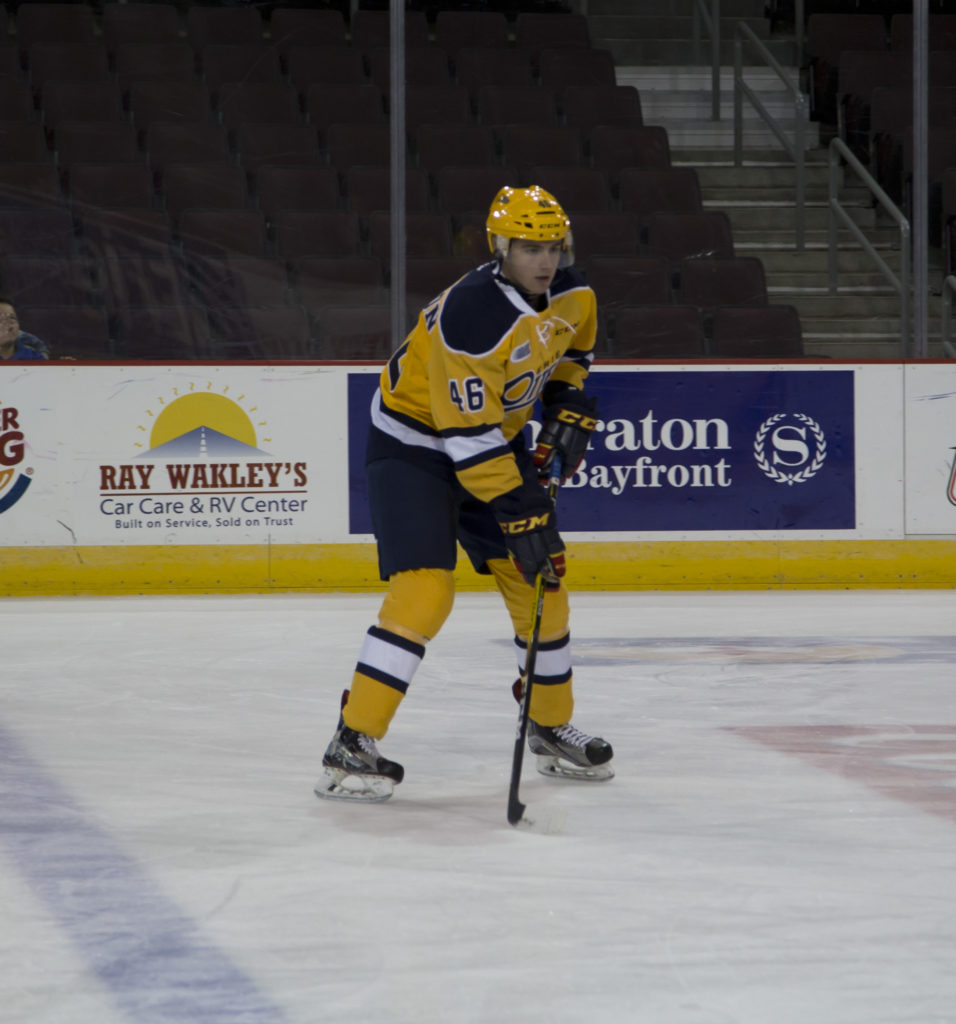 Toronto, ON – The Ontario Hockey League today announced the OHL Academic Players of the Month for November, 2016, including forwards Matthew Strome of the Hamilton Bulldogs, Kyle Heitzner of the Barrie Colts, Cade Robinson of the Erie Otters and Hunter Holmes of the Flint Firebirds.

East Division: 2017 NHL Draft prospect Matthew Strome of the Hamilton Bulldogs is the East Division Academic Player of the Month for November. The 17-year-old native of Mississauga, Ont., has excelled in his Grade 12 University-level studies at Ancaster High School. Strome is currently taking English, Challenge & Change, and Nutrition & Health courses and has achieved excellent results in all three. On the ice, Strome leads the Bulldogs in scoring with 28 points (16-12–28) in 26 games this season. He was Hamilton’s first round (8th overall) pick in the 2015 OHL Priority Selection.

Central Division: Barrie Colts 17-year-old forward Kyle Heitzner is the Central Division Academic Player of the Month for November. Heitzner is currently enrolled in Grade 12 University-level Math, Politics, English and Co-op courses at Innisdale Secondary School and has achieved an average over 85% over all four. The Orillia, Ont., native is described as an excellent student who attends classes on time, participates in class lessons and prepares thoroughly for tests and assignments. The rookie forward currently has two goals on the season, scoring his first in the OHL on September 25th at Ottawa. Heitzner was Barrie’s 11th round (218th overall) pick in 2015.

Midwest Division: Erie Otters rookie forward Cade Robinson is the Midwest Division Academic Player of the Month for November. The 17-year-old native of Jackson, Mich., is excelling in online studies through Michigan Virtual Charter Academy, maintaining a 90% in Chemistry, American Literature, Economics, Geometry and Fine Arts courses. He is described as a hard worker, continually on task, polite and focused. He has recorded one assist through 16 games this season and won’t be eligible for the NHL Draft until 2018. Robinson was Erie’s 11th round (211th overall) pick in the 2016 OHL Priority Selection.

West Division: Flint Firebirds rookie forward Hunter Holmes is the West Division Academic Player of the Month for November. Currently studying French, Business Law, American Literature and Entrepreneurship at Grand Blanc High School, Holmes has maintained an 87% average in his studies as a Grade 11 student. The 16-year-old native of St. Davids, Ont. currently has two goals, five assists and seven points in 25 games this season. He was Flint’s second round (22nd overall) pick in the 2016 OHL Priority Selection.