CAPTAINS NAMED AHEAD OF SEASON OPENER 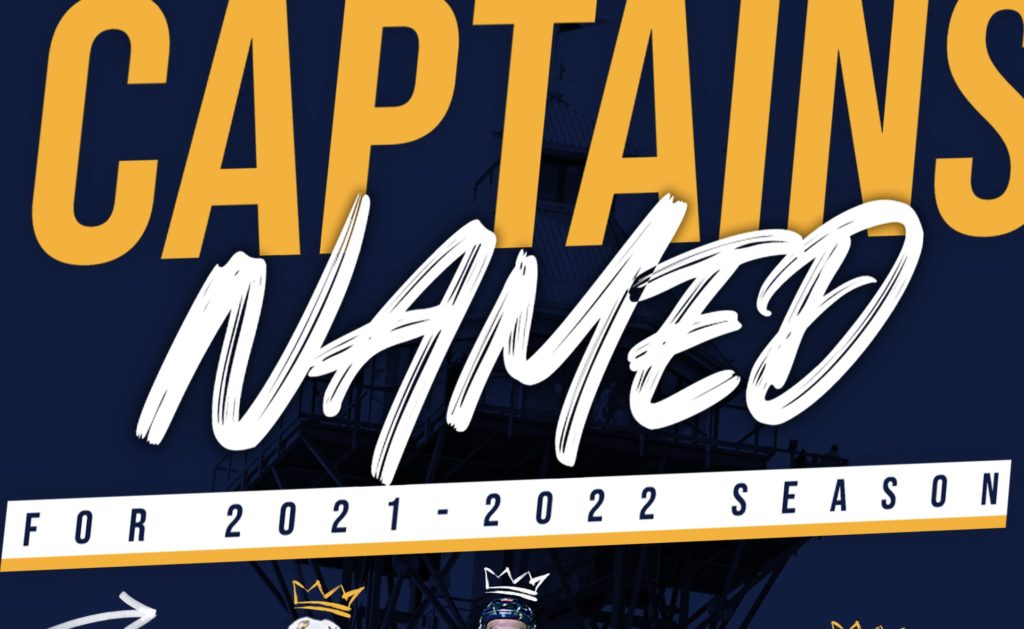 Erie, Pennsylvania  – Ontario Hockey League Opening Night has finally arrived for the Erie Otters hockey club, with the team in Flint, Michigan for its first regular season game in 581 days. A lot has changed across the landscape of the OHL in that time, including a myriad of roster changes for all 20 members.

While a number of new faces adorn the Otters’ lineup, familiar faces and veteran players will be able to bridge the gap between the long-past last season and the new one to come. Ahead of the first battle in a 68-game schedule, the team has announced its leadership corps for the 2021-22 season.

A notable name this preseason for his performance at NHL Training Camp, Daniel D’Amato (’01) was the #4 overall pick in the 2018 OHL Priority Selection Draft to the Otters. The native of Maple, Ontario enters his third season with the Otters, seeing notable growth between his first and second year on the team. In the 2019-20 season, the overage-Forward played in all 63 games of the shortened year, putting up 32 points (18G+14A) and a +15 with three game-winning goals. In 126 games with Erie, he has accumulated 47 points (22G+25A).

This preseason, the 20-year-old participated in just one Otters’ exhibition (scoring a goal), as D’Amato was an invite to the Vegas (NHL) Golden Knights Rookie Camp. One of the most notable players out of Knights’ Rookie Camp, D’Amato fought to earn himself a spot at Vegas’ Main Camp on September 22. D’Amato was eventually reassigned to Henderson (AHL) Silver Knights on October 2 – he was noted as a “standout” by Silver Knights’ head coach Emanuel Viveiros at Vegas’ Rookie Camp.

“It’s an incredible honor to have the opportunity to wear the C for this organization, and be looked at as a leader for the group we have in our locker room.” said D’Amato “Our team preaches off-ice habits and behavior, so for myself, being a leader off-the-ice will have just as much meaning as being a leader on-the-ice.”

In his first game as the Otters’ Captain, D’Amato will get to share the honor with his brother Luca, who will be playing in his first OHL game with the Flint Firebirds.

Productivity was the theme of the preseason for Brendan Sellan (’01), who played – and scored – in all five games. The 100th overall pick of the 2017 OHL Priority Selection Draft accounted for nine points (5G+4A) in the five games, and a team-best +9 in the exhibition season. The Orangeville, Ontario native enters his third season with the Otters, after also seeing dramatic improvement between the first two seasons. In the 2019-20 season, the southpaw Forward played in all 63 games, accumulating 29 points (13G+16A) with five goals on special teams, and two game-winning goals. Entering his overage-year, Sellan is the team’s second-leading returning scorer. In 127 games with Erie, Sellan has found his way to 42 points (17G+25A).

Sellan was linemates with Noah Sedore and Elias Cohen during the preseason, culminating in the highest-scoring line (12G+16A) in the OHL. Now the point-producing Forward will have the chance to write his captaincy story, as he looks to continue the legacy of excellence that comes with the letter.

“It is an absolute honor to be named the Captain of this team – especially looking at the long line of captains before me. I could not be happier to have the privilege of being a leader on this team.” said Sellan “I want to share my qualities and knowledge with my teammates. I want to be a leader that holds everyone accountable, while more importantly keeping myself accountable each-and-every day.”

Captaincy is nothing new to Cameron Morton (’02) – the 19-year-old Defenseman spent the 2018-19 season as captain of the Greater Kingston Jr. Frontenacs where he posted 24 points (5G+19A) in 30 games. During the season, Morton lead his team to an OMHA championship and was named Top Defenseman at the Ontario Hockey Federation Midget AAA Championships. The 124th overall pick in the 2018 OHL Priority Selection Draft, Morton enters his second season with the Otters after a strong debut year as a stout blueliner. In his rookie year, the Kingston, Ontario native was responsible for 12 points (3G+9A) in 58 games; two of his three goals being notched as the game-winners.

A solid preseason is under the belt of Morton, playing in four of the Otters’ five games with two points (2A), and +5 rating. Measuring in at 6’2″ and 208 lbs. heading into the 2021-22 season, Morton is one of the most imposing players on the Otters’ roster, and will look to continue to lead the way physically as a leader on the backend.

“First off, I’m truly honored to be put in the position to help lead this team for the season.” said Morton “I want to be a leader that shows up to the rink with something to prove, and leads by example at-and-away from the rink.” 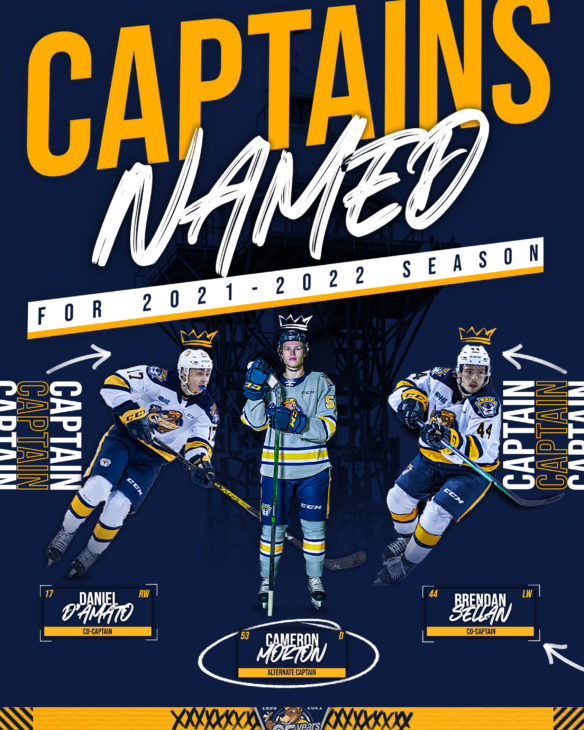 Coach Chris Hartsburg made the captaincy announcement to the players to cap off the team’s final practice before the season opener. The decision was one met with great rejoice from the team, and made with great regard from Coach Hartsburg.

”Dan, Brendan, and Cameron are selfless, hard-working and consistent young men who embody all we expect out of our players. They treat everyone with respect and understand what it means to be an Otter.” said Hartsburg “We have tremendous faith in them as leaders of our group and know they will do a great job.”

The newly-knighted captains will get their first chance as lettered-leaders on the ice tomorrow night, as the Otters kick off the OHL season with the first of four-straight on the road in Michigan. Fans will be able to see the captains and the Otters in-person for the first time at the Home Opener in October 23.