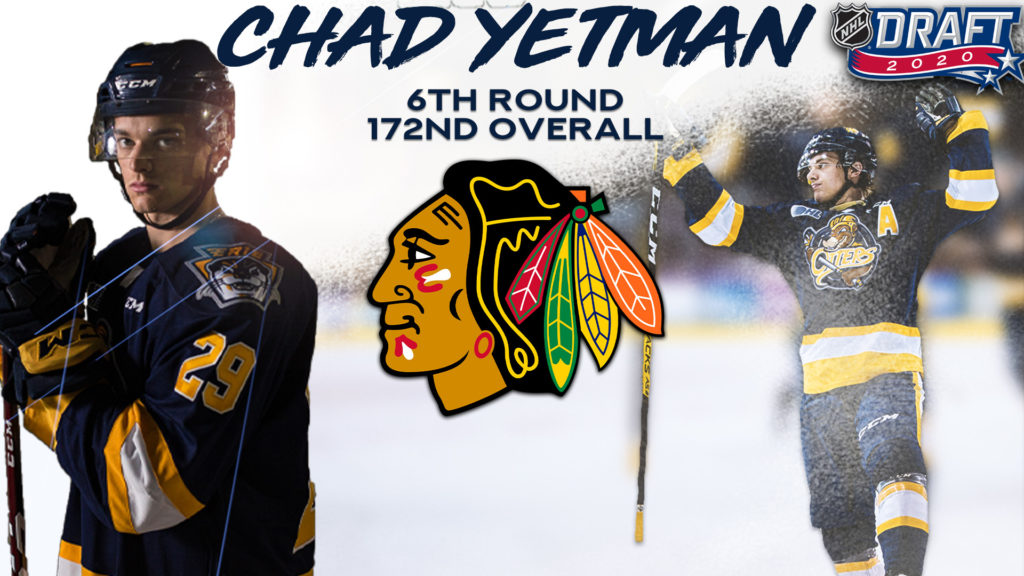 Erie, Pennsylvania – Erie Otters forward Chad Yetman was selected by the Chicago Blackhawks with the 172nd overall pick in the sixth round of the 2020 NHL Entry Draft, becoming the 41st Erie Otter in team history to be drafted at the NHL Draft.

Yetman, a 5-foot-11, 178-pound forward, skated to a career year this past season, collecting 74 points (43G-31A) in 61 games played while finishing eighth among OHL goal scorers during the COVID-19 pandemic shortened 2019-20 campaign. A native of Whitby, Ontario, Yetman joined the Otters as a 10th round pick (196th overall) in the 2016 OHL Priority Selection and has appeared in 185 career games for Erie, amassing 147 points (73G-74A) during his three-year OHL career. The 20-year-old’s continued development in Erie earned him a free agent invite to Detroit Red Wings training camp after his second OHL season in the fall of 2019 before doubling his previous year’s goal scoring total (21) and drawing the eye of the Blackhawks for the 2020 NHL Entry Draft.

Following the conclusion of the 2019-20 season, Yetman was awarded the Erie Otters franchise awards as the Most Sportsmanlike Player and Iron Workers Local Union #3 Three Star Award. In 2018-19 he collected team hardware as the Otters Most Valuable Player and Most Improved Player. He is only the 14th player in team history to record 40 or more goals in a season (Alex Debrincat only player to score 40 or more multiple seasons).