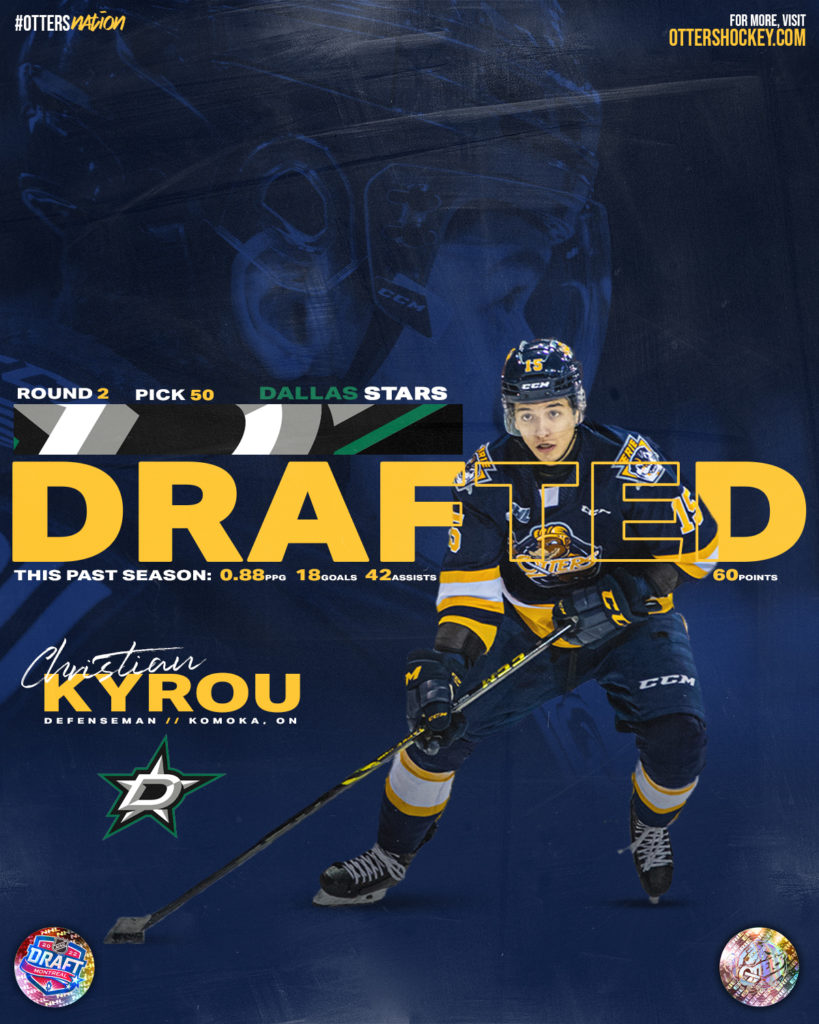 Erie, Pennsylvania – The storybook 2021-22 season for Erie Otters’ Christian Kyrou gets it proper ending, as the Defenseman hears his name called 50th Overall in the 2022 National Hockey League Entry Draft to the Dallas Stars.

A true-to-the-definition breakout star in the 2021-22 season, Christian Kyrou set the OHL on fire as an offensive-defenseman in his first full season. The #84 overall pick in the 2019 OHL Priority Selection Draft, Kyrou ranked 48th among all North American Skaters in the NHL Central Scouting Final Rankings. After not previously appearing on any of the season’s NHL Central Scouting ‘Players to Watch List’, Kyrou’s consistency and growth through the first half of the season had put him on the Scouts’ radar at the Midterm Rankings, earning him 179th overall. Otters’ Head Coach BJ Adams gave praise and credit to Kyrou on his journey.

“I’m very excited for Christian.” said Adams, “He put in a lot of hard work on-and-off the ice over the past couple of years and it paid off for him.”

A dynamic sophomore season, Kyrou grew from an undiscussed, rotation Defenseman to a star-studded 200-foot player with game-changing ability. Finishing top three in scoring among all OHL Defenseman, top-50 in the entire league, and top-3 on the team, Kyrou’s breakout season earned him a top-50 ranking for the upcoming draft. The 18-year-old defenseman appeared in every game this season for Erie, ranking third in team-scoring (1st among Defenseman), 3rd in the OHL for defensemen in scoring with 60 points (18G+42A). He was also named to the Canadian Hockey League ‘Team of the Week’ in early February. Otters’ General Manager Dave Brown commended Kyrou for his development.

“Christian has come so far, and continues to grow both as a player and person.” said Brown, “We are thrilled and ecstatic to share in this moment with Christian and his family.”

A month prior to the Draft, Kyrou participated in the first running of the NHL Scouting Combine since 2019. Kyrou was one of 96 players – just 30 defensemen – selected to partake in the weekend’s activities, with a fantastic running of the Combine allowing for Kyrou to catch the eye of many scouts, especially for his speed, where his pro agility times were among the top of all prospects in attendance.

With Kyrou’s selection, the Otters organization has heard at least one players’ name called in 21 total drafts from 1997 to 2022. Kyrou joins teammate Connor Lockhart as currently rostered Otters drafted by an NHL club. Kyrou is the second Otter to ever be drafted by the Dallas Stars, joining 2007 NHL Entry Draft #172 overall Luke Gazdic.

The entire Erie Otters organization congratulates Christian Kyrou on his accomplishments and recognition, and look forward to his continued development on the road to his professional hockey career.

Keep up with both of the Otters picks and results on OttersHockey.com or across the Otters’ social media. For all results of the 2022 NHL Entry Draft, please head to NHL.com.