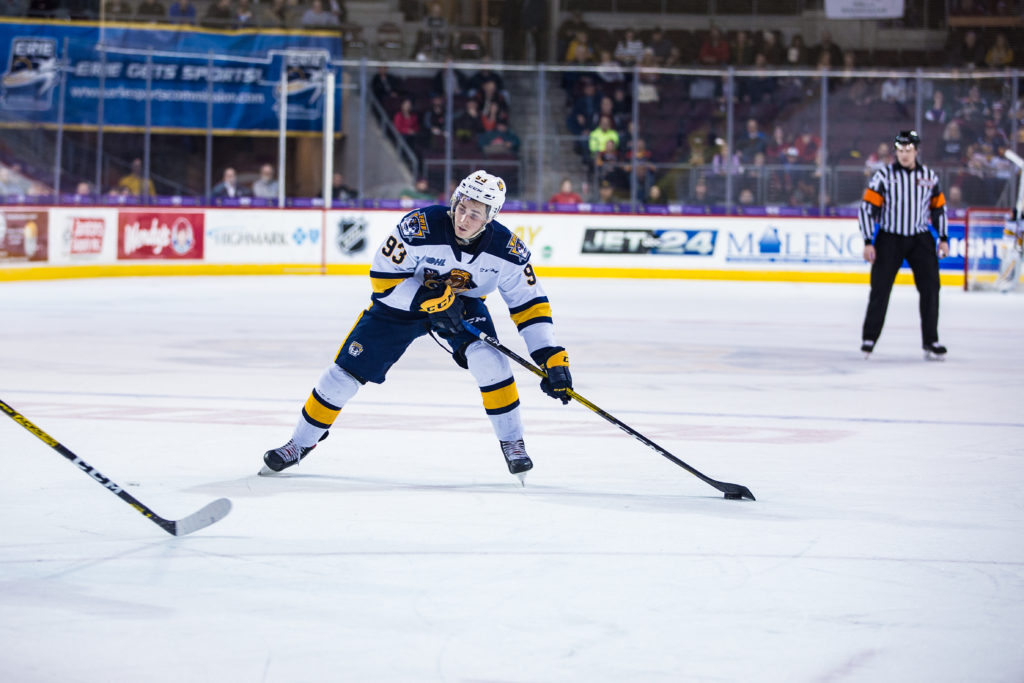 Kitchener, Ontario – Elias Cohen increased his goal streak to four games with a third period tally, but the Erie Otters fell 6-2 to the Kitchener Rangers Sunday afternoon on the front end of a home-and-home series with Kitchener.

Kitchener captain Greg Meireles opened the game’s scoring just under five minutes into the first period with a short-handed breakaway goal. On a Rangers powerplay with under two minutes remaining in the period, Meireles increased the Rangers’ lead to 2-0, where it would stand after 20 minutes of play.

The lone second period goal, and eventual game-winner, came off the stick of Kitchener’s Liam Hawel at the 13:34 mark of the middle frame, and the Rangers took a 3-0 lead into the intermission.

Francesco Pinelli and Jesse Fishman scored 30 seconds apart from one another to increase the Rangers’ lead to 5-0 with 12:23 remaining in the contest. The Otters answered back as Austen Swankler and Maxim Golod set up Elias Cohen for his fourth goal in as many games just past the half-way point of the period. Emmett Sproule scored from Noah Sedore and Brendan Kischnick to make the score 5-2 at the 17:43 mark. But Donovan Sebrango would slam the door shut with the Rangers’ sixth goal with 1:25 on the clock for the 6-2 decision, ending Erie’s winning streak at three games.

The Otters will look to end 2019 with a win on Tuesday, December 31, when they host the Kitchener Rangers at 6:00 p.m. at the Erie Insurance Arena.