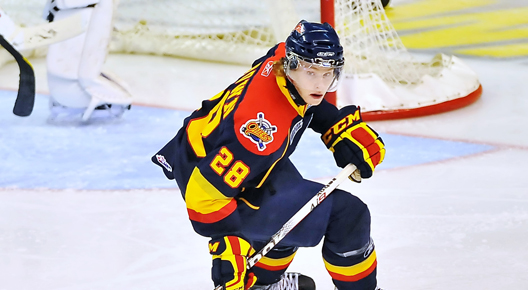 The Erie Otters of the Ontario Hockey League have announced the players who will serve as captains for the 2012-2013 season.

Connor Brown was named as the captain of the Otters. Adam Pelech will serve as an associate captain, and Troy Donnay and Stephen Harper will be alternate captains.

Brown, a sixth round pick of the Toronto Maple Leafs in the 2012 NHL Entry Draft, is the 12th captain in team history. The right winger was the first player in team history to win a spot on the OHL’s First All-Rookie Team after a terrific 2011-2012 season in which he collected 53 points (25g, 28a) in 68 games.

“When I found out, I was a little bit surprised,” Brown said. “It’s an honor, and I’m going to do the best I can to help the Otters win and take this team somewhere. Adam, Troy and Stephen are great leaders and it’s a well-deserved honor for them.”

Pelech will wear a letter for the second year in a row as the associate captain. The third round draft pick of the New York Islanders recovered from an early-season injury last season and accumulated 20 points (2g, 18a) in 44 games. He has also represented Canada at several international tournaments, and is a candidate for this year’s World Junior Championship team.

“I’m really excited,” Pelech said. “We have a good group of leaders and we can be a good team this year with the group of guys that we have. Brownie’s a great guy who I’ve known since I was younger and I’m really happy for him.”

Donnay, who was acquired in January from the London Knights, has been an imposing presence on the blue line since joining the Otters. The 6-foot-7 defenseman from Fenton, Mich. is expected to play an important role in his first full season with the Otters.

“I’m really proud that Bass and the coaches think of me as a leader and I’m ready to step up and fill that role,” Donnay said. “I’m proud that Brownie is our captain and I think it’s good for the team.

Harper will take on a leadership role as a 17 year old after a fantastic rookie season in 2011-2012. Harper led 1995-born players in goals last season with 24, and is a top prospect for the 2013 NHL Entry Draft, which will take place in Newark, N.J. in June.

“It’s a pretty big accomplishment for me and I wasn’t expecting it,” Harper said. “I’m happy with Connor being the captain, he holds people accountable and he’s a hard worker. He’s a great choice for captain.”

Brown will lead the Otters in his first game as captain when the Otters open the regular season on the road against the Niagara IceDogs Thursday night at 7:00 p.m. Fans can listen to all the action on Fox Sports Radio AM 1330 The Fan beginning at 6:45 p.m. with the Erie Federal Credit Union Pre-Game Show.