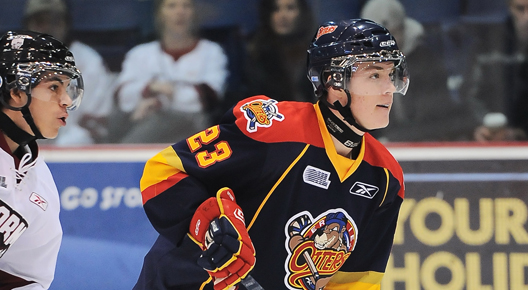 Erie, PA – An injury to Erie Otters goaltender Ramis Sadikov early in the game against the Niagara IceDogs led to an unexpected season debut for forward Connor Crisp, who made 32 saves as an emergency replacement for Sadikov in Erie’s 13-4 loss to Niagara Sunday afternoon.

With Devin Williams unable to dress because of an injury suffered in Friday’s shootout loss to Saginaw, Sadikov was the lone goaltender dressed for Sunday’s game. He was forced to exit 1:45 into the game after he was hit by IceDogs forward Alex Friesen, who received a five minute major for charging and a game misconduct.

While Sadikov was being evaluated in the Erie locker room, forward Dane Fox and defenseman Liam Maaskant made their way through the tunnel during the lengthy delay. Instead it was Crisp who emerged as the mystery netminder after 20 minutes, playing his first game for the Otters since skating as a forward in Erie’s Game 7 loss to the Windsor Spitfires on April 5, 2011.

Crisp had not played for the Otters this season due to shoulder surgery stemming from an injury suffered in the preseason against Windsor.

The IceDogs took the lead 23 seconds after Crisp entered the game, as Freddie Hamilton scored shorthanded with a rising shot off the crossbar.

Soon after, Crisp made the first of his 32 saves to the delight of the crowd in St. Catharines as he made a dazzling kick save with the right pad against overager David Pacan. The crowd cheered for each save made by Crisp, who had not played goaltender in ice hockey since he was five years old.

Jamie Oleksiak and Andrew Agozzino each scored to put the IceDogs up 3-0 by the 10:11 mark of the first period. The Otters then got on the board at 16:16 as Stephen Harper drilled home his 21st goal of the season on the power play at 16:16.

The Otters trimmed the deficit down to one as Luke Cairns scored in his third straight game. The center led a three-on-one into the IceDogs zone and fired a shot from the right circle for his 11th goal of the season with 12.8 seconds left in the first.

In the second period, Ryan Strome scored the first of his five goals at 7:17. Pacan then followed up to make it 6-2 at 10:27 and Strome added his second of the game 54 seconds later.

Sondre Olden put the Otters back on the board with 2:02 remaining in the second as he fired a one-timer pass from Harper through Chris Festarini for his 10th goal of the season. Strome then completed his hat trick with 50 seconds left in the period to give the IceDogs a 7-3 lead going into the third.

The cheers continued for Crisp well into the third, and the newly minted goaltender acknowledged the adoring fans during a stoppage after making a good save against Freddie Hamilton. Jake Evans soon put the Otters with three with his ninth goal of the season, jamming in a rebound at 3:25.

The rest of the scoring was done by the IceDogs, who tallied six in the final period. At the end of the game, the Otters and IceDogs congratulated Crisp for his efforts at center ice, and Crisp was given first star honors and a standing ovation from the capacity crowd of 3,029 at Jack Gatecliff Arena.

Olden and Harper each tallied a goal and two assists, as Olden notched a +2 rating for the Otters. Following the game, Otters general manager Sherwood Bassin issued a statement explaining the circumstances leading to Crisp playing in goal for the Otters.

“Late last night, our backup goaltender (Williams) failed a concussion test,” Bassin said. “I looked at our alternatives; one of our goaltenders (Adam Wood) was playing in the Ontario Junior C Championships, the other (Corey Foster) in the Midget Ontario Championships. I studied our alternatives based on the 2000 or so games I’ve been involved in. This turned out to be a bad decision. I accept full responsibility and apologize publicly for the embarrassment to the league and the sport of hockey that I love. I have deep respect for our league and sport.”

The Otters return to Erie Wednesday night to host the Plymouth Whalers. It’s the final Wild Wendy’s Wednesday Buck Night of the season, with $1.00 Smith’s hot dogs, popcorn, beer and pop. For tickets, call (814) 452-4857 or go online to ottershockey.com.