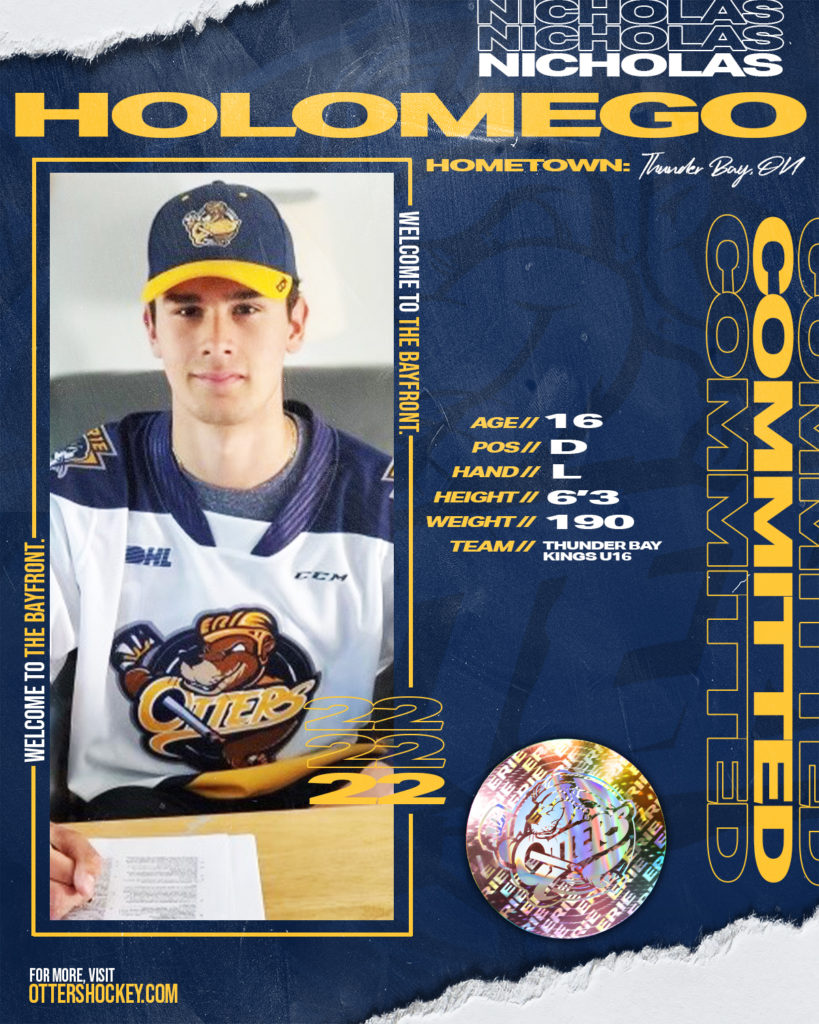 General Manager Dave Brown announced the signing today, as the Otters turn focus toward the start of the 2022-23 season starting with Training Camp in late August.

“The Otters are very thrilled to work with Nicholas. He is a very intense and very deliberate individual when it comes to his long-term goals and objectives, and we are eager to watch him grow with us over the next four years.” said Brown, “Nicholas is a big kid who gets where he needs to, and no doubt makes our end a difficult and uncomfortable place for opposing offenses to set up shop.”

Holomego was selected 85th overall in the 5th Round, as Erie’s first Defenseman of the 2022 OHL Priority Selection Draft.

“I am honored to be part of such an amazing organization.” said Holomego, “It’s truly a dream come true, and I will work my hardest every day to be the best representative I can be.”

A 6’3 ½“, 189 lbs. imposing Defenseman, Holomego comes to Erie after a productive season for the Thunder Bay Kings U16 AAA. In 40 games played in the 2021-22 season, Holomego would grab 20 points (7G+13A). Co-Director of Scouting Devin Brown commended the newest member of the Otter blueline on his ability.

“Nicholas has great attributes such as his size and reach.” said Brown, “He sees the ice well, makes nice outlet passes, is an integral part of his team, and very frustrating player for opponents to play against.”

More importantly, his presence on and off the ice is what made him stand out to the Otters, said Otters Director of Hockey Operations Scott Grieve.

“Nicholas is a big-bodied defenseman. He plays a throwback style, and makes the game hard for his opponents. Nicholas displayed leadership qualities this past season, captaining Thunder Bay.” said Grieve, “We are excited to have Nicholas and his family on board and look forward to assisting in his continued development.”

The Thunder Bay, Ontario native was able to get his first taste of Erie and the Otters Staff during the team’s Orientation Camp in late May. Holomego, alongside fellow members of his Draft Class, participated in drills, assessments, and scrimmages under the tutelage of the Otters Hockey Operations Department.

Erie has now signed its first picks from both days of the Priority Selection Draft – Malcolm Spence (Day 1, Round 1, #2 overall) and Nicholas Holomego (Day 2,  Round 5, #85 overall).

The Erie Otters are thrilled to officially welcome Nicholas to the Flagship City, and see what the big-bodied blueliner can bring to Training Camp, and in the Fall.

Keep up with all the Otters 2022 Draft Picks and results on OttersHockey.com or across the Otters’ social media. For all results of the 2022 Priority Selection, please head to OntarioHockeyLeague.com. 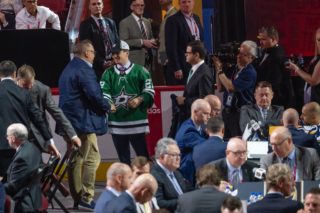