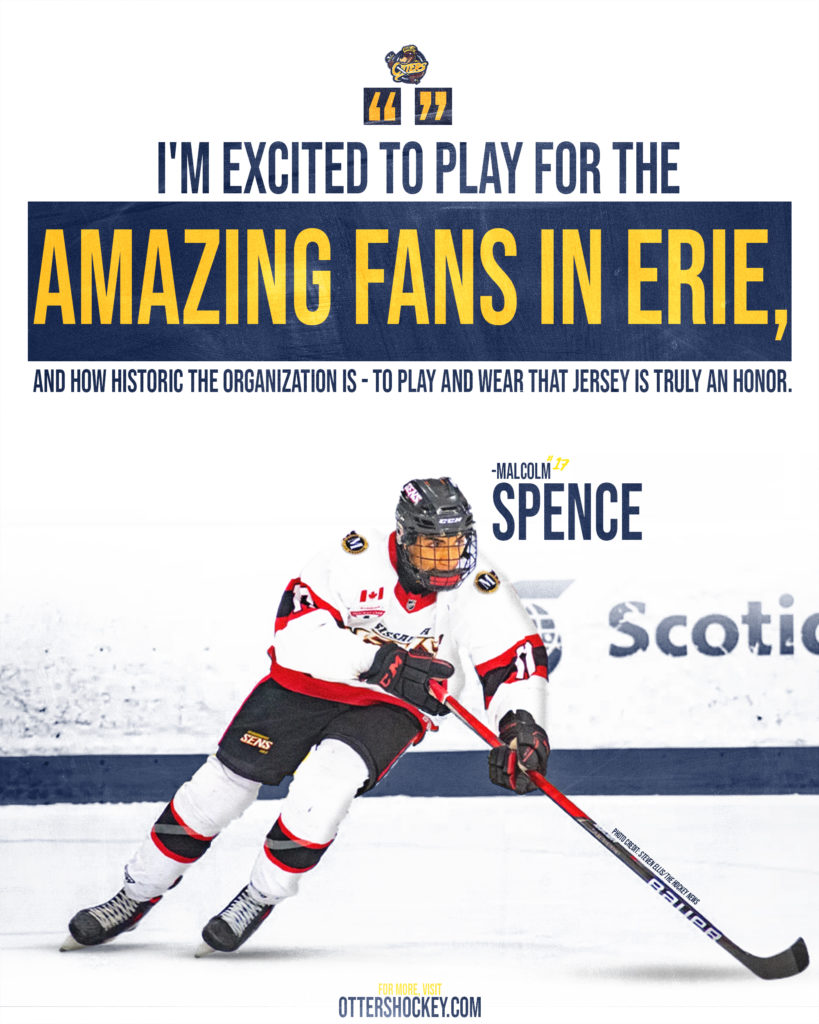 Erie, Pennsylvania – For the 27th time in team history, the Erie Otters participated in the Ontario Hockey League’s Priority Selection Draft – looking for the next generation and crop of Otters prospects and players.

Erie came into day one with the #2 overall pick, and two picks Round 2 – Sault Ste. Marie (#38 overall) and North Bay’s (#41) 2nd Round picks. Erie acquired Sault Ste. Marie’s 2022 2nd Round pick in January 2018 in exchange for Taylor Raddysh, Jordan Sambrook, while North Bay’s 2022 2nd Round pick came earlier this week in a trade with Peterborough for future Otters’ picks. The #2 overall selection was a result of being ‘runners-up’ in the inaugural OHL Top-Four Selection Lottery.

In his latest season in the GTHL, 2nd overall pick Spence had a two-point-per-game average season with 56 points (29G+27A) in 28 games. During the OHL Cup, Spence would grab an additional 13 points (6G+7A) in seven games enroute to the Senators’ OHL Cup Championship – and being named to the OHL Cup All-Star Team.

“The number of where I’m being drafted doesn’t really matter to me, it was about getting to the right place. For Erie to be where they were [in the Draft], it was a no-brainer for me and my family. It’s such a historic organization with all the success it’s had, and I’m just hoping that I can contribute to it and have more success.” said Spence, “I’m excited to play for the amazing fans in Erie, and how historic the organization is – to play and wear that jersey is truly an honor. It’s a dream come true.”

“[Malcolm] was the guy from start-to-finish we had as the guy we wanted. We saw him early in the year, and we were excited about the opportunity of [him] being in the Draft.” said Brown, “He plays a pro-style game, and we’re just super excited to have him – not only his skill level, but his maturity and leadership that he brings off the ice. It’s easy to talk about character, but it’s even better when you know you’ve got it. He’s lightyears above his age.”

The #38 overall pick Gibbons, from Whitby, ON is a big-bodied, pro-size Goaltender measuring in at 6’4”, 181 lbs. at 15-year-olds. Playing with the Markham Majors U16 AAA in the OHL Cup, Gibbons came away from four games played with a 1.54 GAA, .926 SV%, two shutouts, and a 3-1 record. Otters’ Goaltending Scout Adrian Volpe liked a lot of what the young Goaltender had to offer.

“Jacob is a tall, athletic goaltender that reads plays well.” said Volpe, “He has a high compete level with a ton of upside.”

Sawyer, the #41 overall pick from Orangeville, ON joins the Otters as the last pick of day one, coming in from the Vaughan Kings U16 AAA. Measuring in at 6’0”, 168 lbs., Sawyer was a point-plus-per-game scorer in the OHL Cup, grabbing seven points (2G+5A) in five games, with a +3 and just a single penalty. This comes after a point-plus-per-game regular season where the Forward grabbed 34 points (14G+20A) in 33 games.

“Logan is a high-energy player who uses his skill and size to create opportunities in the offensive zone. His high hockey IQ allows him to read and react in all three zones.” said Grieve, “We’re ecstatic to welcome Logan to the Otters organization.”

Erie did not have a pick in Round 3, after trading its 2022 3rd Round pick to Barrie in January 2017 in exchange for Cameron Lizotte.

“We’re thrilled. Adding a guy with Malcolm’s caliber is a cherry on top, and then adding some goaltending depth with Jacob, and Logan on top of that, it’s pretty exciting.” said Grieve, “We’re adding a group here of 06’s.”

On Saturday, Erie would add an additional 13 picks – seven Forwards and six Defenseman – to their 2022 Draft Class. In total, the Otters would draft three top 50 picks, nine Forwards, six Defenseman, and a goaltender. In the last two Draft Classes, Erie has had 10 players make it onto the Regular Season roster.

For further details on the Otters picks and results, head to OttersHockey.com or across the Otters’ social media. For all results of the 2022 Priority Selection, please head to OntarioHockeyLeague.com.