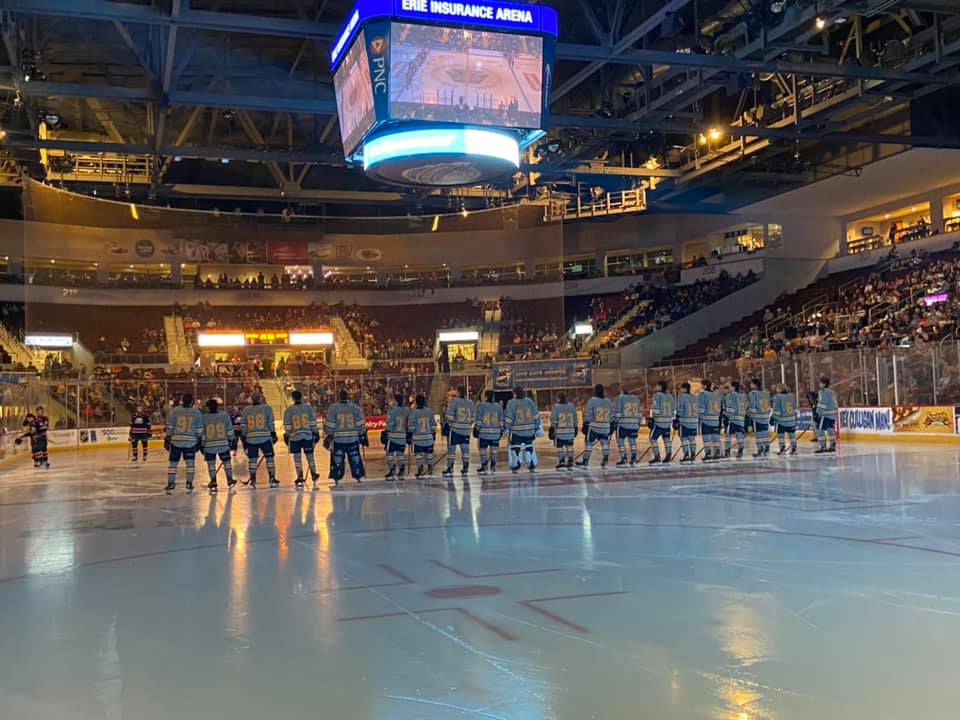 Erie, Pennsylvania – Brendan Sellan provided overtime heroics with a penalty-shot goal in the final 17 seconds of the extra period to propel the Erie Otters to a 4-3 victory over the Saginaw Spirit at the Erie Insurance Arena Saturday.

For the first time in 594 days, the Erie Otters hosted a game in the Erie Insurance Arena, and the home crowd of over 3,800 fans was as raucous as one could hope. Saginaw’s Andrew Oke made key saves early to keep things scoreless through the first eight minutes, but the Otters continued to dictate momentum. The home team allowed just two shots against in the first 14 and a half minutes. Brendan Hoffmann got the audience jumping when he grabbed a 1-0 lead for Erie, netting his second goal of the young campaign at the 9:10 mark. Hoffmann barreled in on Oke from the hashmarks and received a beautiful pass off a 2-on-1 rush with Taeo Artichuk. At the opposite side of the pad, defenseman Christian Kyrou blocked a strong chance from Davis Codd on an ensuing sequence to once again get a response from ticket-wielders. The love continued to pour down on Erie’s young talent as Artyom Kulakov earned an ovation by negating a Pavel Mintyukov breakaway out of the penalty box. With the Otters killing a penalty late in the period, Nolan Lalonde made routine saves and the Otters took a 1-0 lead into the intermission.

Erie kept tide in its favor as Lalonde made a heads-up save by holding the post as Saginaw tried to send one past his shoulder on an early second-period penalty kill. The Otters successfully killed the Spirit man advantage, but moments later they were tasked with another. This time, Matyas Sapovaliv fired home a wrister from the high slot after smooth cycling by the Spirit with 12:37 remaining in the middle frame. Nearing the 8:40 mark, Lalonde kept things knotted at 1s with a pillow kick as a puck awkwardly switched direction. The Otters netminder stopped a cross-ice try on the Spirit powerplay and then cleared the puck down to finish the short-handed sequence. The Otters killed their third penalty of the period. Kulakov reintroduced himself to the allegiance of the crowd when he dumped Ian Philips 12 minutes into the stanza. Lalonde received praise from Otters’ faithful as he stopped a half-break at the 19-minute mark as a Saginaw forward squeaked through the Erie defense. Erie escaped to intermission with a tied score and 17-14 advantage in shots.

Saginaw swept the wind away from the sails of Erie to go up 2-1, just 36 seconds into the third frame but the bow didn’t break. Cameron Lowe forced a turnover in the offensive zone within the eighth minute, but Oke made three straight grade-A stops to keep the lead for Saginaw. With 12:14 remaining in regulation, Nathan Sauder hit the post off a blue-line blast, and Elias Cohen slammed it home off the rebound to tie things up in a tenacious display. Less than a minute later, Nick Wong dodged a hit on a rush into Erie’s zone and came face-to-face with Lalonde before scoring off a backhand-forehand move. Down 3-2 in the final seven minutes, Brett Bressette slapped in a powerplay goal on a second effort with chaos in front that tied the game 3-3. Kyrou made a phenomenal defensive play with 80 seconds left by sliding down and sweeping the puck off the stick of Codd on a 2-on-1 against, and the Otters shut things down in their own end to force overtime.

Daniel D’Amato forced the issue in overtime and had three whacks at the crease of Oke early, but ultimately the puck left the zone. At the other end, Saginaw’s Dalton Duhart fired one off a zone entry that was swallowed by Lalonde. Action continued to flare as Wong walked his man and went for a try at his second of the night with 1:38 left to play, but Lalonde closed the legs. As the end-to-end rushes continued, Sellan was awarded a penalty shot with 16.4 remaining in overtime. Skating in on the right side, Sellan journeyed to the top of the crease before making a hard cut and slamming in the home-opening, game-winning goal on his forehand.