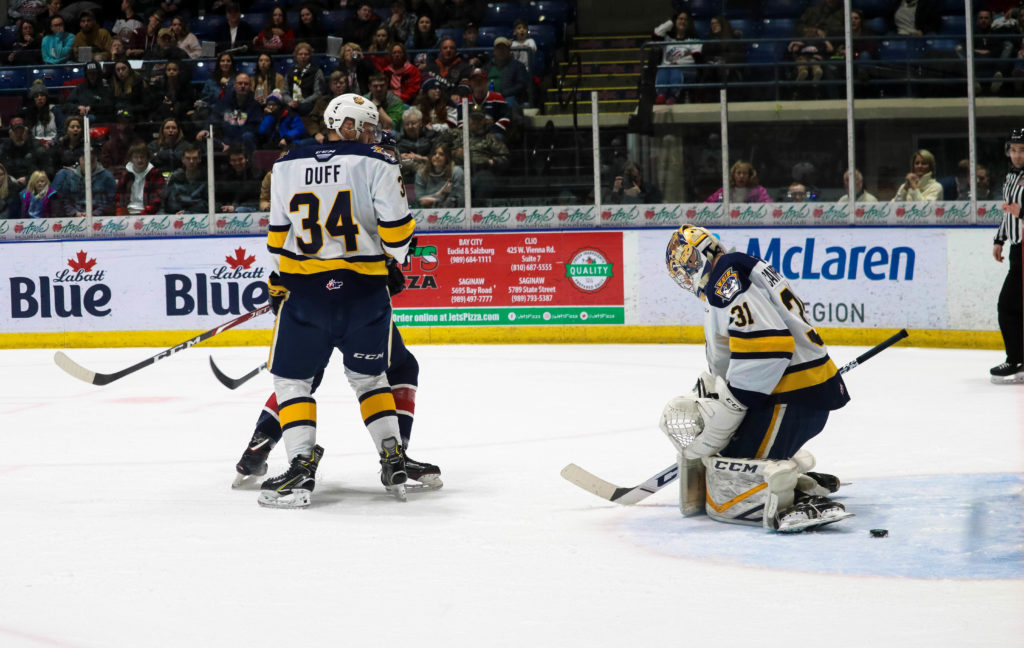 Saginaw, Michigan – The Erie Otters fell 6-3 to the Saginaw Spirit at the Dow Event Center Saturday night after a second period rally from the Otters led to a strong third period answer from the Spirit.

Saginaw controlled the contest early and Cole Coskey scored a short-handed goal to give the Spirit a 1-0 lead with just under four minutes played. With Erie on the powerplay again, Saginaw’s Cole Perfetti received a pass through the neutral zone from Coskey and added to the Spirit lead with a breakaway goal just five seconds past the halfway point of the period. Jake Goldowski would increase the spread to 3-0 at the 15:12 mark. Moments later, Maxim Golod was stopped on a breakaway and the score remained 3-0 at the end of the first.

Erie responded strongly in the second period and Aidan Campbell stood tall early to keep the game in reach. At the other end of the ice, Mathew MacDougall was left alone in front of Lennox and buried a pass from Daniel D’Amato in the corner to make the game 3-1 at the 8:40 mark of the middle frame. Nearly 10 minutes later, MacDougall assisted on an Emmett Sproule goal, and the Otters went into the intermission down by one.

Damien Giroux responded for the Spirit early in the final stanza and slipped past the Otters defense to pot in a pass from DJ Busdeker. Giroux then tipped in a point-shot that made the game 5-2 at the 9:10 mark of the third. Moments after being robbed of a goal, Brendan Sellan moved the puck to D’Amato, who scored off the pads of Lennox from a bad angle with 7:16 remaining in the third. Saginaw padded its lead with an empty-net goal from Ryan Suzuki with 34 seconds left on the clock.

The Otters will look to get back on track in the playoff race Wednesday, February 5, when they visit the Guelph Storm for a 7 p.m. matchup at The Sleeman Centre.