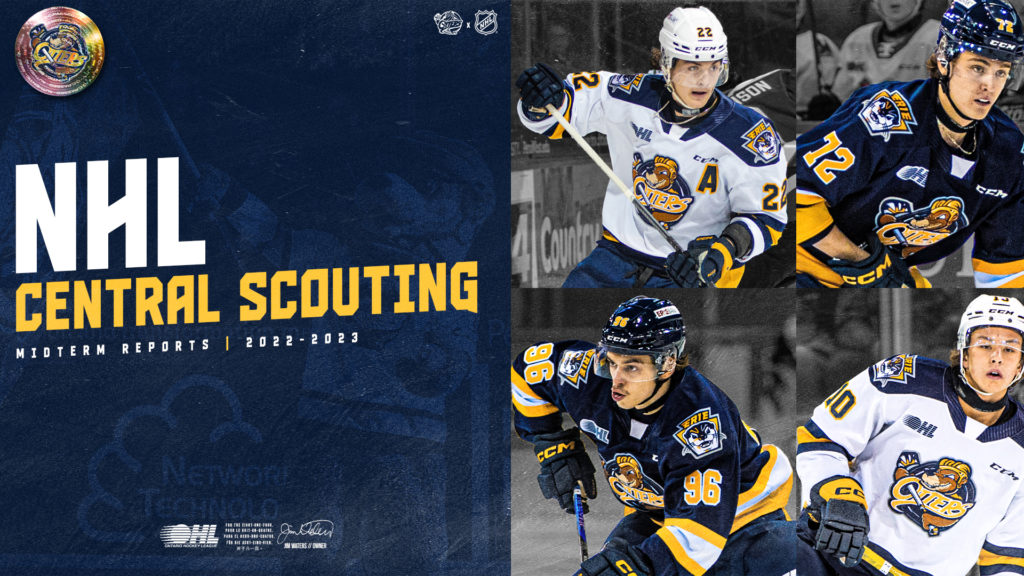 Ondrej Molnar, the #5 overall pick in the 2022 Canadian Hockey League Import Draft, was ranked 48th among all North American Skaters in the rankings. A product of Slovakia, Molnar wasted no time once arriving in North America in showcasing his reputation for scoring. In his first seven games in the OHL, Molnar scored a point-per-game. With seven points (1G+6A), Molnar jumps into the top-30 of rookie scoring in the OHL with less than 10 games played. The adaption to the North American game has been no struggle for Molnar, who has found a fit in the offensive core of the Erie Otters as a playmaker and dynamic forward.

Carey Terrance, the #10 overall pick in the 2021 OHL Priority Selection Draft, was ranked 50th among all North American Skaters in the rankings. Highly-regarded as a skilled, pro-style skater heading into the OHL, Terrance has showcased himself as a crafty, playmaking forward with a high ceiling. Two games short of 100 played, Terrance has grabbed 48 points (26G+22A) including eight power play goals and three game-winners. In his sophomore season, Terrance has matched his point total from year one in exactly half as many games. With the spotlight on him during the Kubota CHL/NHL Top Prospects Game on January 25 in Vancouver, Terrance will have the opportunity to showcase his abilities alongside fellow regarded prospects.

Spencer Sova, the #8 overall pick in the 2020 OHL Priority Selection Draft, was ranked 136th among all North American Skaters in the rankings. The 19-year-old defenseman spent part of the preseason with the Buffalo Sabres organization, and utilized the experience to his advantage coming into his second OHL season. With 36 games played this season, Sova is second in goal-scoring amongst defenseman at 14, and 12th in total-scoring with 28 points. Exactly 100 games into his career in the OHL, Sova has grabbed 56 points (23G+33A) including 12 power play goals and three game-winners.

Alexis Daviault, the #52 overall pick in the 2021 OHL Priority Selection Draft, was ranked 169th among all North American Skaters in the rankings. Acquired by the Otters on December 14, 2022 from the Sarnia Sting, Daviault has suited up in nine games for his new team. Daviault is a hybrid defenseman – not afraid to make plays low in the offensive end, but tactful enough in the defensive end to start play the other way. Just shy of 100 games played in the OHL, Daviault has found 30 points (8G+22A) including two power play goals and a game-winner.

The 2023 NHL Entry Draft takes place June 28-29 in Nashville, TN, as the Erie Otters will look forward to a fourth-straight year of developing players into drafted prospects. In the 26 year history of the Erie Otters, 43 players have been taken in the NHL Draft.

The Otters organization congratulates Ondrej, Carey, Spencer, and Alexis for their recognition at the Midterm Rankings, and wish continued success in development in the remainder of the 2022-23 season.