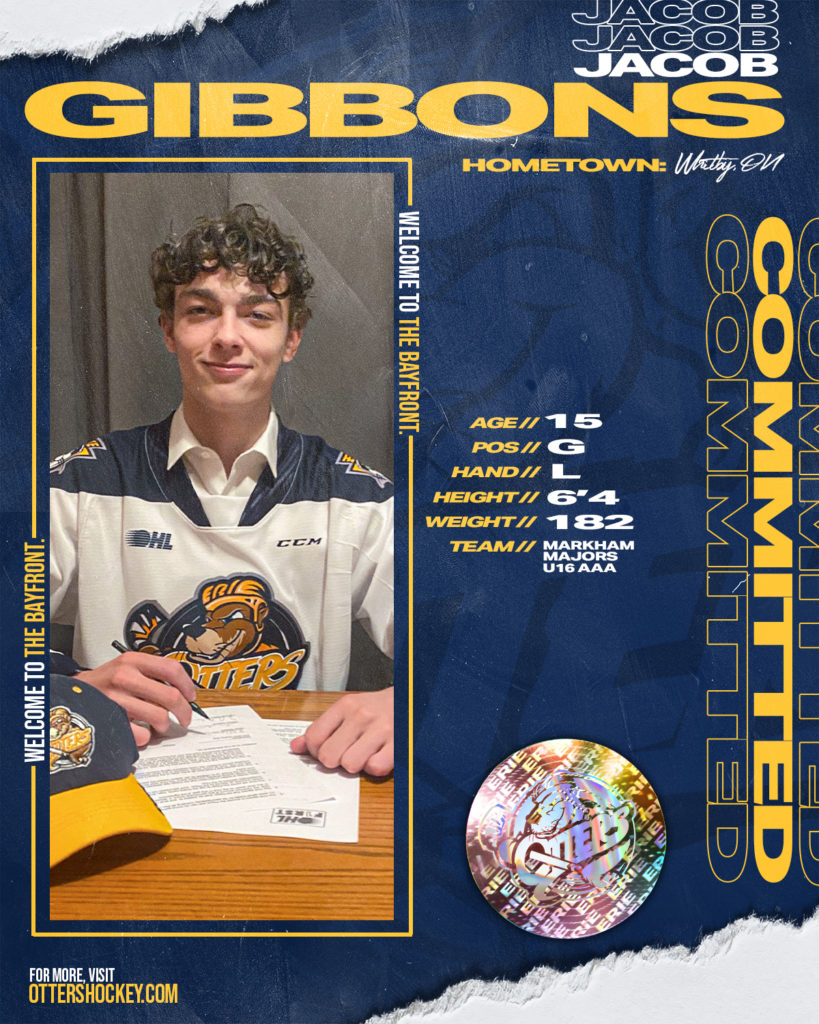 Erie, Pennsylvania – With Training Camp well underway for the Erie Otters, a participating player in the development camp has officially committed to the team – Goaltender Jacob Gibbons.

Gibbons, Erie’s second pick – #38 overall – in the 2022 Ontario Hockey League Priority Selection Draft is a big-bodied netminder from Whitby, ON. Playing with the Markham Majors U16 AAA in the OHL Cup, Gibbons came away from four games played with a 1.54 GAA, .926 SV%, two shutouts, and a 3-1 record. The left-gloved goaltender measures in at 6’4”, 181 lbs., and has utilized his frame well during the Camp.

“It’s just such an amazing organization.” said Gibbons, “It’s always been a dream of mine to play in the OHL, and being given that opportunity is something unreal. I’m really excited to be committing to [Erie].”

Alongside Otters’ teammate and fellow 2022 draftee Malcolm Spence, Gibbons participated in Hockey Canada’s National Under-17 Development Camp in July as one of 100 selected players – and one of just 40 OHL players.

Otters Director of Hockey Operations Scott Grieve spoke highly of Gibbons, and his commitment to Erie.

“We are excited to have Jacob and his family on board with our organization.” said Grieve, “He is a big, athletic goaltender, and we look forward to working with him in his development moving forward.”

Otters’ Goaltending Scout Adrian Volpe liked a lot of what the young Goaltender had to offer during the scouting process.

“Jacob is a tall, athletic goaltender that reads plays well.” said Volpe, “He has a high compete level with a ton of upside.”

The Otters officially welcome Jacob to the Flagship City, and look forward to seeing his skills and abilities grow and develop with the organization – on and off the ice.