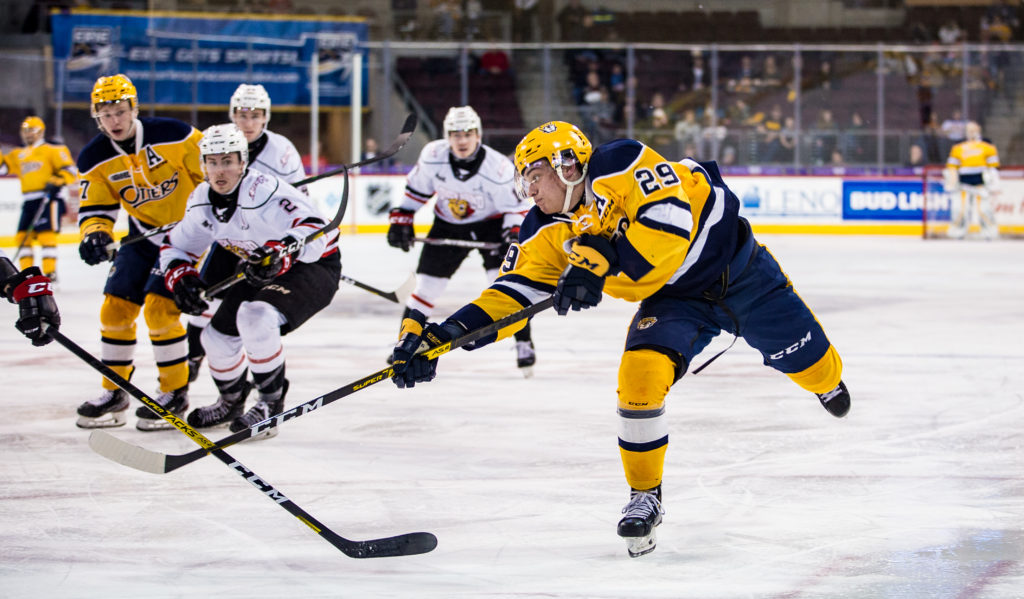 Guelph, Ontario – The Erie Otters dropped a 5-3 decision to the Guelph Storm in a back-and-forth battle at the Sleeman Centre Friday night.

The Storm took a 1-0 lead just 38 seconds into the game when Matthew Papais’s shot was deflected in off the leg of an Otter. Erie found the equalizer at the 13:34 mark when Elias Cohen buried a rebound in front of the net. Connor Lockhart passed the puck to Jamie Drysdale whose shot from the right circle led to the Cohen goal to send the teams into the intermission tied 1-1.

Daniel Murphy made an impressive stop near the five-minute mark of the second period, denying Jacob Roach on a breakaway chance. Guelph took a 2-1 lead with 7:14 gone in the second period when Cam Hillis stole the puck behind the Erie net and set up Pavel Gogolev, who wristed a shot over the right shoulder of Murphy for a 2-1 lead. Maxim Golod knotted the game at 2s just two seconds past the halfway point in the game with a short-handed goal. Chad Yetman won a puck battle through the neutral zone and busted free in the offensive zone before he was stopped on a breakaway chance by Nico Daws. Daws lost sight of the puck, which was at his feet, and Golod streaked in to push in his 23rd goal, and 70th point of the season. Later, Yetman set up Drysdale for a powerplay goal that allowed the Otters to a 3-2 lead with just 23.8 seconds remaining in the middle frame.

After the break Cedric Ralph deflected a Keegan Stevenson shot from far out to even the game 3-3 early in the third period. With time winding down, Eric Uba gave the Storm a 4-3 lead by potting in a rebound on the powerplay. Erie could not convert with the extra attacker out late, and Gogolev punctuated Guelph’s win with an empty-net goal.

Erie will look to rebound when they host the North Bay Battalion Saturday, February 29, for a 7 p.m. matchup at the Erie Insurance Arena.