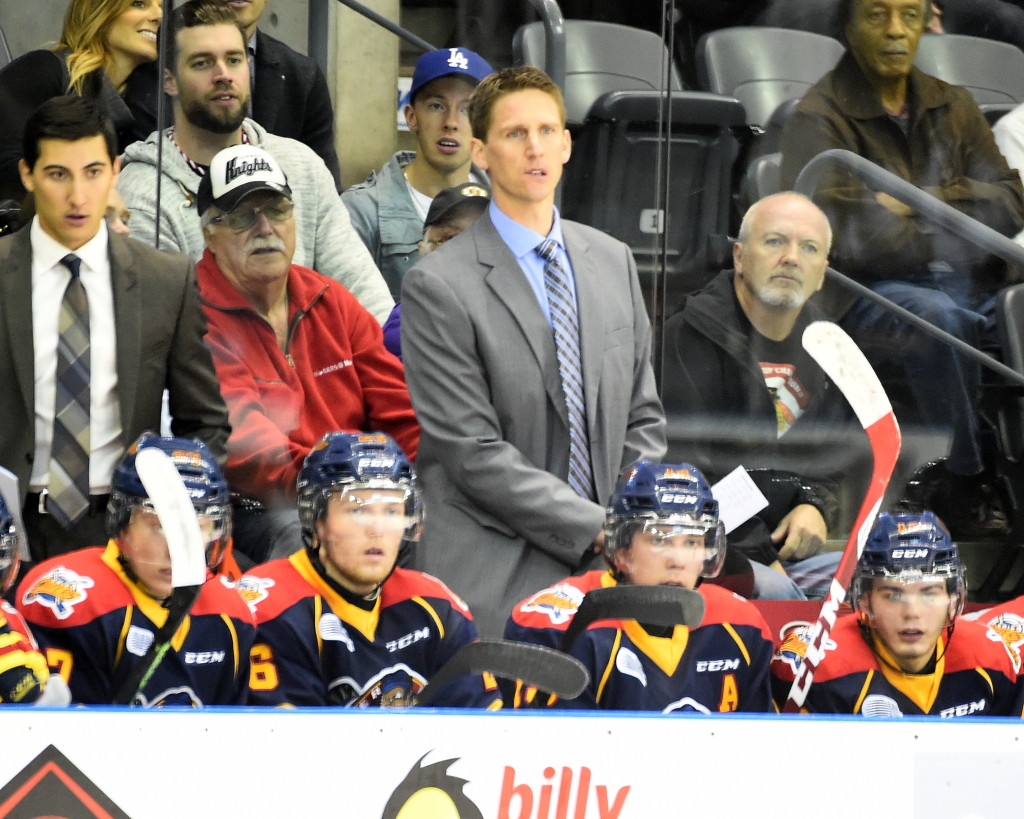 MONTREAL, Que. – Fans of Canada’s National Junior Team will see a familiar face behind the bench when the IIHF World Junior Championship returns to Montreal and Toronto in December. Dominique Ducharme (Joliette, Que./Drummondville, QMJHL) will reprise his coaching role for a second consecutive season – this time as the team’s head coach.

Ducharme, who recently accepted the role of general manager and head coach of the QMJHL’s Drummondville Voltigeurs following five seasons with the Halifax Mooseheads, was on-hand for the announcement at a news conference at Montreal’s Bell Centre Monday.

The announcement was made by Scott Salmond, vice-president of hockey operations and national teams, and Joël Bouchard and Tim Speltz of Hockey Canada’s Program of Excellence management group. Bouchard and Speltz worked with Hockey Canada’s hockey operations staff, as well as the Canadian Hockey League, to make the coaching selections which included the appointments of Tim Hunter (Calgary/Moose Jaw, WHL), Kris Knoblauch (Regina/Erie, OHL), and Misha Donskov (London, Ont./Hockey Canada) as assistant coaches.

“Every year, we undergo an extensive process to select our national team coaches from amongst a very deep and talented pool of candidates from across the CHL – and this year was no exception,” said Salmond. “Dom, Tim, and Kris bring a great cross-section of experience to this team, and an understanding of what it takes to be successful at tournaments where you don’t have the luxury of time on your side. Their individual records speak for themselves, but we’re most excited about the prospect of what these three great hockey minds can produce working as a coaching unit.”

Ducharme is no stranger to standing behind the Team Canada bench, having been part of the 2015-16 National Junior Team coaching staff and winning gold with Canada’s National Men’s Summer Under-18 Team at the 2013 Memorial of Ivan Hlinka tournament. During his tenure with the Mooseheads, he led the team to its first-ever Memorial Cup championship in 2013. His coaching experience also includes three seasons as assistant coach with the Montreal Junior, and Ducharme also played an assistant coaching role with Team Quebec at the 2011 World Under-17 Hockey Challenge, finishing fourth. Ducharme played professionally from 1995 to 2002 in the ECHL, AHL, and in Europe.

Hunter won a bronze medal with Canada’s National Under-18 Team at the 2015 IIHF U18 World Championship, and is fresh off his second season as head coach of the WHL’s Moose Jaw Warriors. Prior to joining the Warriors, Hunter coached more than 1,000 games over 14 seasons in the NHL as an assistant coach with the Washington Capitals, Toronto Maple Leafs, and San Jose Sharks. As a player he appeared in 815 NHL games over 16 seasons with the Colorado Avalanche, Vancouver Canucks, the Sharks, and he won the Stanley Cup with the Calgary Flames in 1989.

Knoblauch has coached in the CHL since the 2006-07 season, spending his first six seasons in the WHL – first as an assistant coach with the Prince Albert Raiders, then in the same role with the Kootenay Ice until taking over as head coach in 2010. As head coach, Knoblauch led the Ice to their third WHL championship in 2011 and the team’s first Memorial Cup appearance since 2002. In 2012-13, Knoblauch was hired by the OHL’s Erie Otters as the team’s head coach. This season, he was awarded the Matt Leyden Trophy as the OHL’s Coach of the Year. Knoblauch was head coach of Team Canada Red at the 2015 World Under-17 Hockey Challenge. His playing career includes winning a CIS national championship with the University of Alberta Golden Bears in 2000.

Donskov joined Hockey Canada in 2014 as manager of video and analytics. He has won a gold medal with Canada at the 2016 IIHF World Championship in Russia, the 2015 IIHF World Championship in the Czech Republic, and with Canada’s National Junior Team at the 2015 IIHF World Junior Championship in Toronto and Montreal. Donskov was associate coach with the OHL’s Ottawa 67’s from 2012-14, and spent three seasons with the London Knights, service as assistant general manager and assistant coach, winning an OHL championship in 2012. Donskov also spent eight years working with the NHL’s Columbus Blue Jackets and Atlanta Thrashers within hockey development programming, community development, fan development, marketing, and hockey operations.

“Being part of Team Canada at any capacity is an experience like no other. The role of head coach of the National Junior Team isn’t one I take lightly,” said Ducharme. “I’m looking forward to working with Misha, Tim and Kris, and demonstrating our Canadian talent in front of a hometown crowd this December.”