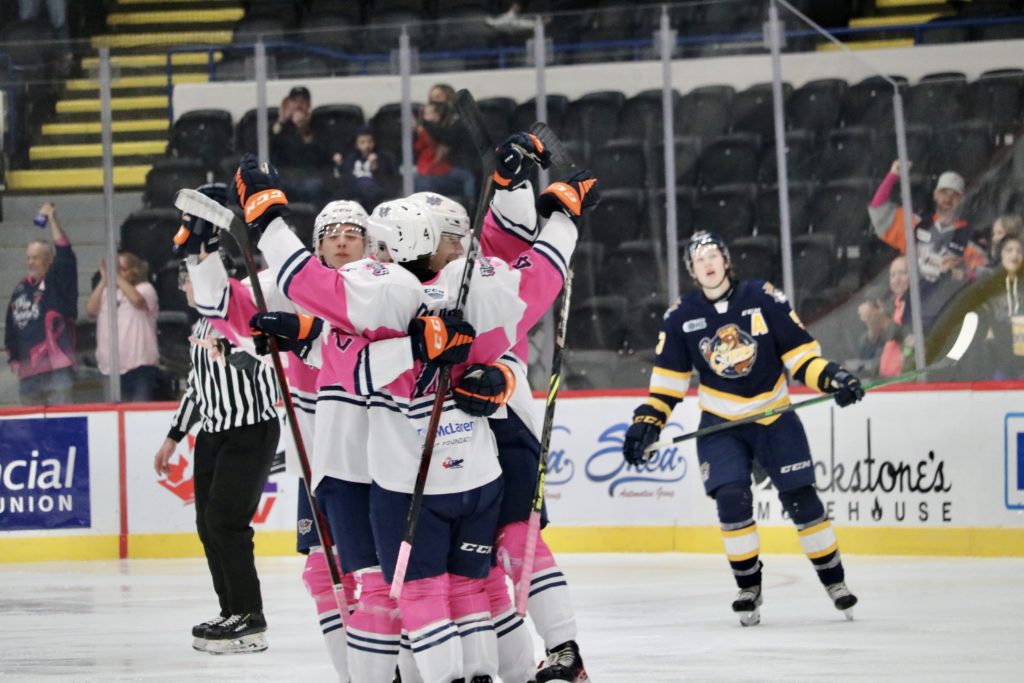 Flint, Michigan – The Erie Otters kicked off the first of a three-game road trip weekend on Thursday night, taking on the Flint Firebirds for the second time this season. Coming fresh off a 3-0 loss to Flint to open Regular Season play on Saturday, the Otters would look to build upon what went well.

Erie came out of the gates with guns absolutely blazing, firing off 20 shots by the time all was said-and-done at the final horn. While scoring opportunities presented themselves – especially for Taeo Artichuk on a turnover early – the Otters were unable to capitalize on their offensive outburst. Nolan LaLonde, right off a 30-save game on Saturday night, would see a light workload to start the game with only four shots needing to be saved. After 20, the Otters and Firebirds saw goose eggs in the scoresheet, with Erie leading 20-4 in shots.

History looked bound to repeat itself in the second period, as the Otters opened the period with a weak shot on net from Tyler Deline (1) that snuck past LaLonde to give Flint a 1-0 lead. Just over a minute later, the Otters power play unit, on their second chance of the night, would finally find paydirt, as Brendan Hoffmann (1) would sneak one past Cavallin and through the blue paint for Erie’s first goal of the season. After a continued battle of back-and-forth, the Otters would get a power play opportunity again, where Colby Saganiuk (1) would score his first career OHL goal to give the Otters a 2-1 lead late in the second. Saganiuk’s goal would earn him Third Star honors later in the game. As the horn sounded, Erie held a lead into intermission for the first time this season, and a 29-11 shots advantage.

Poised and ready to continue their onslaught of time in the attacking end, the Otters would continue things on status quo to start the period. As physicality picked up on the ice, the fans in the stands willed the Flint team forward, and the Firebirds put on a shooting gallery against LaLonde to the tune of an 18-10 shots advantage. A hooking call against Ryan Thompson would put the Firebirds on the power play, where Brennan Othmann (2) would score on a one-timer in the right circle. With just under six minutes left, the game stood tied at 2-2. With 1:50 remaining in the game, Erie would see a fourth power play opportunity, as Flint would be charged with a too-many-men infraction. With a chance to win the game, the power play fell back to Saturday night form, allowing for a turnover up the ice that turned into a festival of dangles for Zacharie Giroux (1) to score his first of the year and the game-winner with 1:00 remaining. With the net empty and the man-advantage on, the Otters would be unable to get a shot on net, falling in come-from-behind fashion to Flint 3-2.

Erie falls to 0-2 on the season, as they travel north to Saginaw for a pair against the Spirit to open the Western Conference foe’s season. With a travel rest day on Friday, the Otters drop the puck at 7:05 on Saturday, and 5:30 Sunday. Erie opens the home season on Saturday, October 23 against Saginaw.