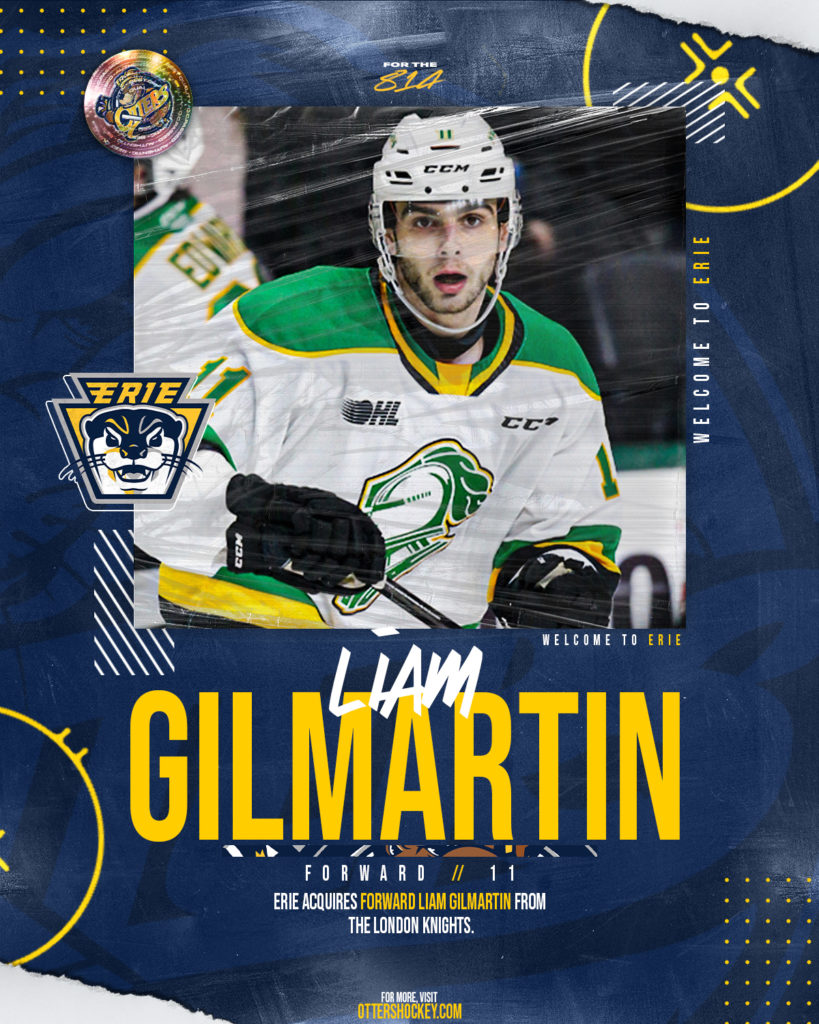 Erie, Pennsylvania – The 2022-23 Ontario Hockey League Regular Season kicks off on Thursday night, with the Erie Otters taking the trip out east toward the Canadian capital. Ahead of the highly-anticipated season debut in Peterborough on September 29, General Manager Dave Brown announced the acquisition of second-year Forward Liam Gilmartin from the London Knights.

The German-born, Virginia-raised Gilmartin played in 55 games during his OHL Rookie season in London, grabbing 34 points (16G+18A) and a +10. Suiting up in four playoff games for the Knights, the Left Winger picked up an assist.

Prior to his time in Major Junior, the 82nd overall pick in the 2019 Priority Selection Draft spent the 2019-20 and 2020-21 seasons in the United States Hockey League for the United States National Team Development Program, grabbing 35 points (13G+22A) in 50 career games. While with the USNTDP, Gilmartin also had the chance to compete with the U.S. National U17 & U18 teams, playing in the 2020-21 IIHF World U18 Championship with the latter. In the 2021 NHL Entry Draft, the San Jose Sharks selected Gilmartin with the 167th (6th Round) overall pick; he most recently competed in the Sharks’ 2022 Rookie Camp during the OHL Preseason.

“He consistently uses the inside lane for exits and entries, often going cross-ice to change the part of the attack. He recognizes his options quickly, using his handling skill to squeak past a forechecker then start the play or making the backhand pass. Gilmartin brings some defensive value, through the aforementioned physicality and persistence.”

“We are very excited to be adding Liam to the organization. Liam’s skillset and physical attributes, along with his experiences in London, with the USNTDP, and internationally make him an integral part of our organization as we push to return to the playoffs.” said Brown, “Liam is a player we have coveted for some time, and we are elated to have him part of the Otters family.”

With the acquisition of Gilmartin, Erie has now picked up two productive, second-year Forwards with playoff experience via trade. Earlier this offseason, the Otters had acquired Sam Alfano from the Peterborough Petes.

The Otters welcome Liam to the Flagship City, and look forward to seeing his skills and abilities grow and develop with the organization – on and off the ice.

The 2022-23 Erie Otters season kicks off on Thursday night in Peterborough, Friday night in Kingston, and Sunday afternoon in Ottawa.