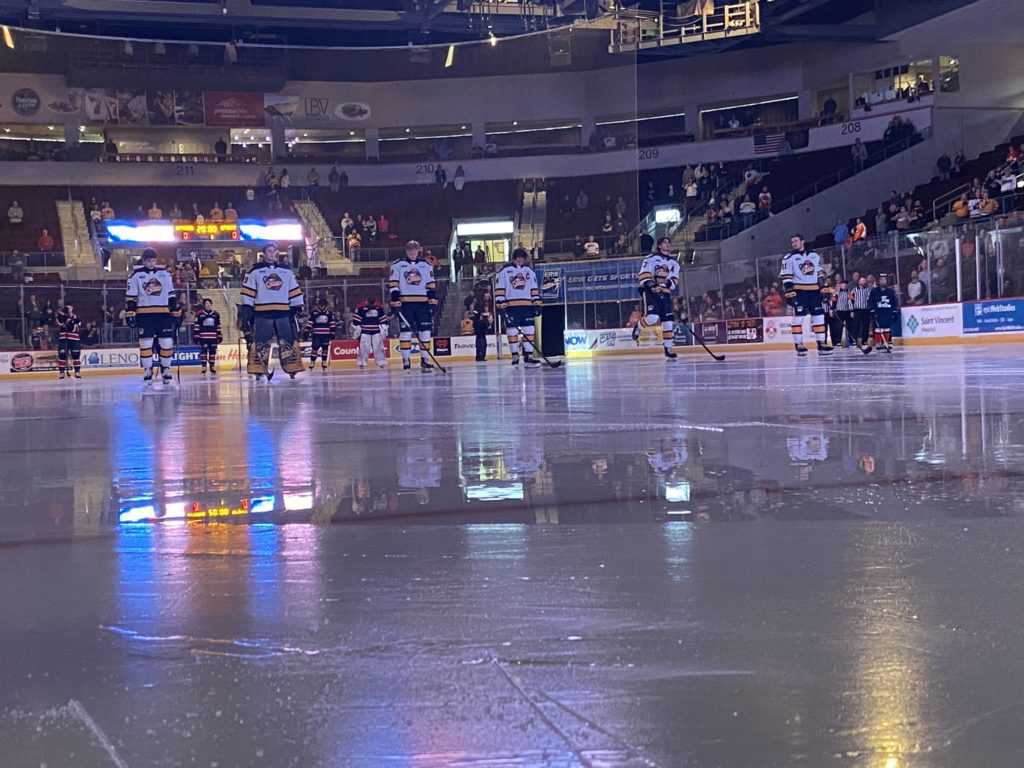 Erie, Pennsylvania – Brett Bressette and Noah Sedore each provided three-point efforts for the host Erie Otters, but Saginaw’s Dean Loukus scored a hat-trick to power the visiting Spirit to a 6-4 victory at the Erie Insurance Arena Sunday.

The Otters looked sharp early, and Brett Bressette threatened to put Erie on the board within the first three minutes of the contest, but Spirit netminder Tristan Lennox wouldn’t budge. It wasn’t long before the home team found an answer. Bressette continued to tally points as he sailed a lead pass to Noah Sedore on a breakaway. Lennox rushed out of the crease and tried to beat Sedore to the loose puck but misjudged his distance and Sedore flopped in the 1-0 goal. Lennox left the ice after the media timeout and was replaced by Andrew Oke. Saginaw clawed toward tying the game, but Erie killed its third penalty down the stretch. The Spirit carried pressure late and Dean Loukus finalized a tic-tac-toe play with 31 seconds left to force a 1-1 tie at intermission.

Saginaw controlled play in the second, and Loukus broke the Erie penalty-killing streak with a 2-1 goal at 12:06. Later, Davis Codd snuck past the defense off a pass from Camaryn Baber and scored glove side on the breakaway to put the visitors up 3-1. Erie was held to nine shots through 40 minutes and took a two-goal deficit into the locker room.

Bressette opened the final frame with his third goal in three straight games just 85 ticks in. Elias Cohen and Sedore recorded helpers on Bressette’s marker that momentarily pulled Erie to within one goal. Loukus completed his hat-trick two minutes and 15 seconds later to put the Spirit up 4-2. Once more, the Otters chipped away at the deficit. Ross charged behind the defense and tried to beat Oke on a partial breakaway. Oke made initial contact with the biscuit but lost it between his pads. Carey Terrance scored the first goal of his OHL career to make it 4-3 by pushing in the unaccompanied puck with 12:10 on the clock. Nick Wong dashed comeback hopes less than two minutes later with a right-corner snipe from the left circle that would stand to be the game-winning goal. The Otters ramped up intensity and Sedore assisted on Bressette’s fourth of the campaign with 4 minutes remaining, but Wong iced the night with an empty-netter for a 6-4 final.

The Otters continue their homestand with a two-game weekend against the Flint Firebirds beginning Friday, October 29 with a 7 p.m. puck drop at the Erie Insurance Arena.