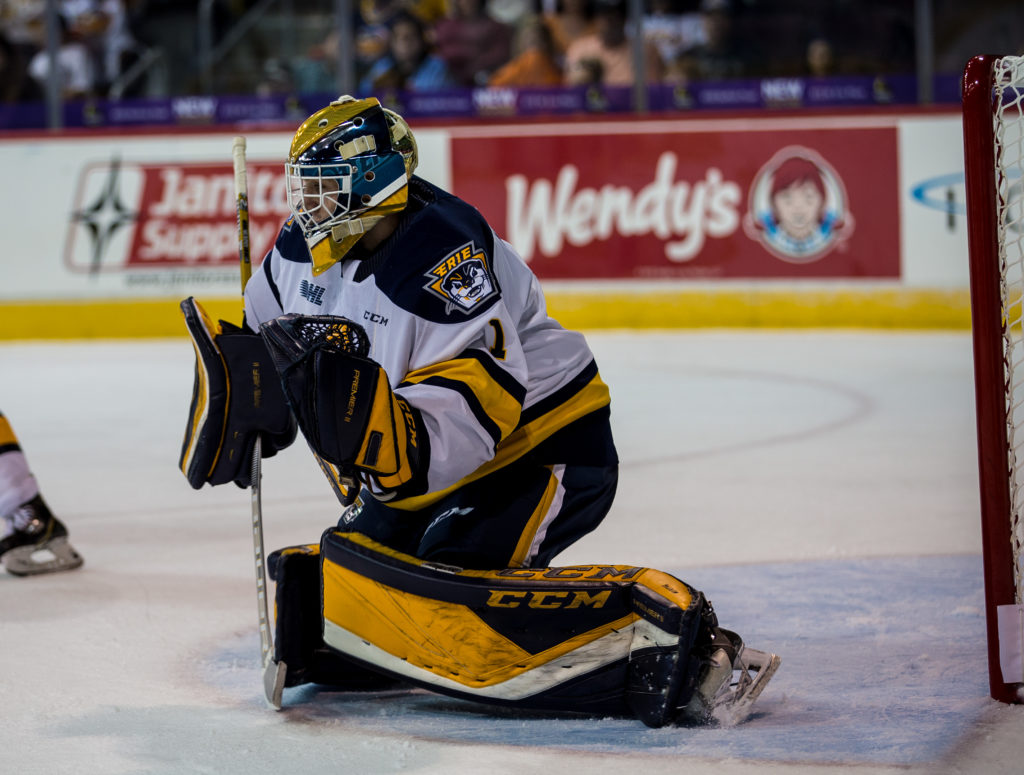 Ottawa, Ontario – Despite a 40 save performance by Daniel Murphy, the Erie Otters fell 5-0 to the Ottawa 67’s, who increased their franchise record win streak to 16 games Sunday at TD Place.

Daniel Murphy made his first of many high-quality saves at the 4:41 mark of the first period, stopping a two-on-one chance. Mitchell Hoelscher tipped the puck behind Murphy on an odd-man rush at the 8:43 mark of the period to open the game’s scoring. Murphy continued to stand strong down the stretch in the first period, stopping a flurry of 67’s chances and keeping the score 1-0 going into the intermission.

The 67’s continued their pressure early in the second period and Murphy took the net away from Marco Rossi, who hit the crossbar on another two-on-one opportunity. Still under three minutes into the period, Murphy held his positioning on the post to stop a grade-A Hoelscher chance. Rossi made the game 2-0 at the 4:19 mark of the frame off a cross-crease pass. Less than a minute after the second Ottawa goal, Murphy completely extended himself across the net to save a Thomas Johnston chance. Hoelscher increased the 67’s lead to 3-0 on a delayed penalty at the 7:40 mark. Just as the Otters were leaving their zone for an offensive rush, a stolen puck was fed to Rossi who was all alone in front and made the score 4-0. Moments later, Emmett Sproule was given a chance to get Erie on the board but was stopped on a breakaway by Ottawa netminder Cedrick Andree. Ottawa had a quality shorthanded chance with just over three minutes remaining in the period, and Murphy made another extension save. Andree stoned Daniel D’Amato on a shot from the slot with 44 seconds remaining in the frame, keeping the 4-0 Ottawa lead after 40 minutes.

Murphy continued to stand on his head throughout the third period, stifling the Ottawa offense early in the final frame. Murphy capped off a series of four saves with a more than impressive, desperation flourish at the 4:48 mark of the period. Jack Beck tipped in a puck from the back door for the final Ottawa goal which came seven minutes and 22 seconds in. Murphy continued to make excellent saves down the stretch, including a breakaway chance, but Erie could not find an answer for the league leading Ottawa 67’s.

The Otters are back in action Saturday, January 11, when they will observe Cancer Awareness Night presented by UPMC at the Erie Insurance Arena.