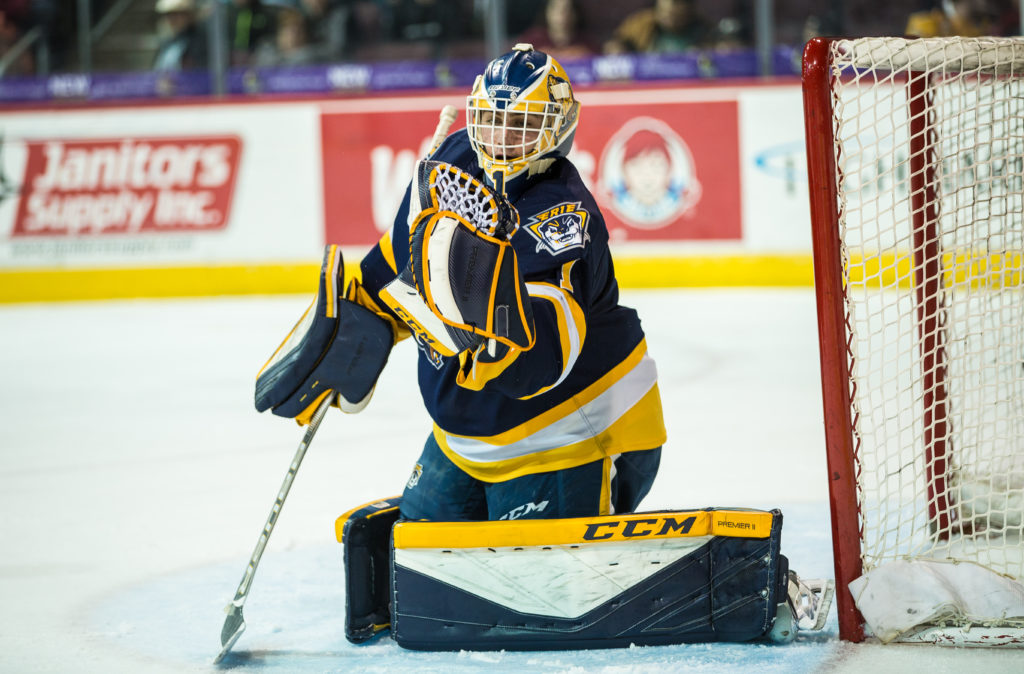 Erie, Pennsylvania – Daniel Murphy made 37 saves and Chad Yetman found the net twice, but the Erie Otters dropped a 6-3 decision to the London Knights Sunday afternoon at the Erie Insurance Arena.

Maxim Golod beat Brett Brochu on Erie’s second shot of the game to give the Otters a 1-0 lead. Golod gained the zone and fired from the left circle with three minutes and 45 seconds off the game clock. Moments later, Daniel Murphy made an athletic play to keep the Otters ahead. London’s Connor McMichael made a move in front to get Murphy moving from right to left, but the netminder quickly closed the gap to deny a five-hole attempt. London found the equalizer at the 10:51 mark when a point shot from Nathan Dunkley was tipped in by Ben Roger. An Erie shot attempt was blocked with seconds remaining in the frame, and the teams headed to the locker rooms knotted 1-1.

London took a 2-1 lead 94 seconds into the middle stanza when a shot-pass from Alec Regula found the stick of Jonathan Gruden and was tipped into the cage. On the following play, Murphy made a full extension with his left leg to stop Dunkley from getting a second tally. Despite hard work by Murphy, Kirill Stekov sent a cross-slot pass to an open Billy Moskal, who fired home the 3-1 goal at 4:23. Murphy added two key saves in the following minutes, stopping Hunter Skinner alone in front, and Liam Foudy on a shorthanded chance. At the other end of the ice, Yetman lasered in a powerplay goal after corralling a pass from Golod and Jamie Drysdale at the 13:43 mark to cut the deficit to one goal. Murphy stole a Ryan Merkley 2-on-1 chance down the stretch and added a point-blank save on a McMichael powerplay bullet, but London found one more tally before the period ended. Gruden dropped the puck in the high slot and it was sent top-shelf by Skinner, who blazed into the zone from down ice and made it a 4-2 game at 16:34.

The Knights added to their lead with a powerplay shot from Merkley at the blueline 18 seconds into the final frame. Just past the halfway mark, the Otters started to find hope as Jack Duff’s slapshot generated a rebound that Yetman finished to make the contest 5-3. Murphy added another remarkable save to his afternoon, taking away space by challenging the McMichael down the middle of the ice with under five minutes remaining. With time winding down, the Otters were stopped by Brochu on an odd-man attempt from Matthew MacDougall in the right circle. Erie never stopped battling, but the Otters’ rally attempt was silenced by an empty-net goal from Liam Foudy with 62 seconds remaining in the game.

The Erie Otters will look to pull further ahead in their playoff race when they battle the Guelph Storm Wednesday, March 4, at the Erie Insurance Arena.