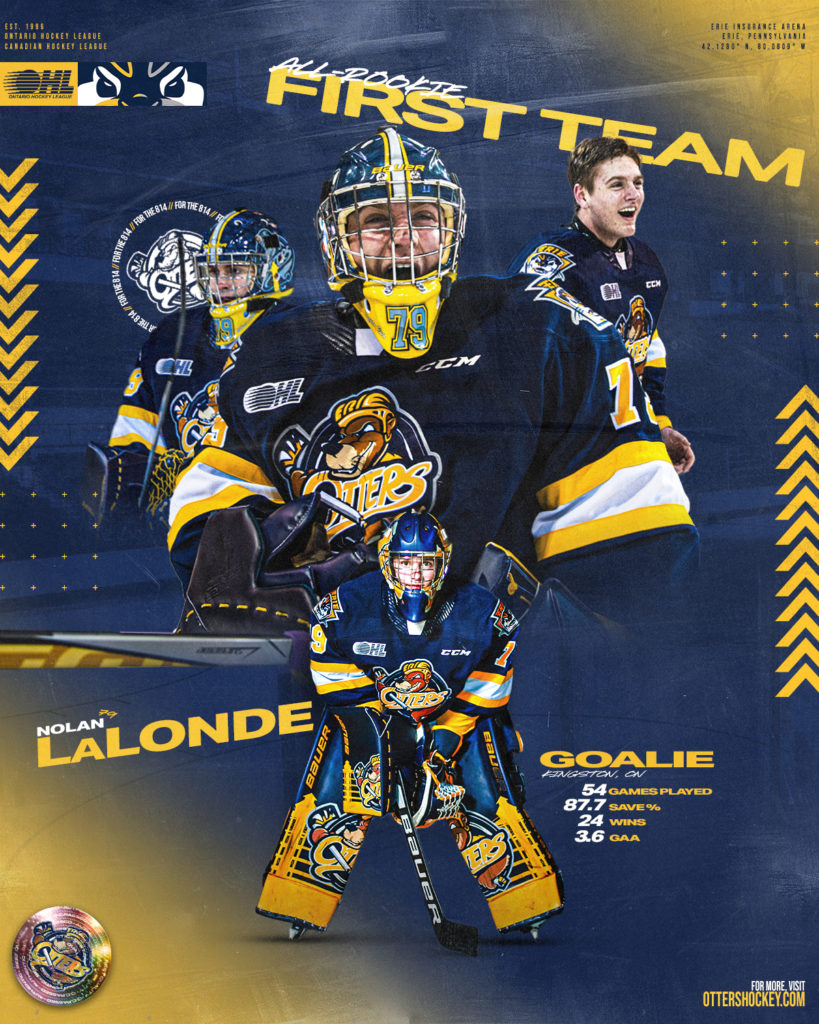 Erie, Pennsylvania – Following one of the most impressive seasons of goaltending by an Erie Otters’ rookie all-time, first-year goaltender Nolan Lalonde has been recognized by the Ontario Hockey League as All-Rookie First Team Goaltender.

Lalonde, the 49th overall pick in the 2020 OHL Priority Selection Draft, came into his rookie season as an anticipated backup, but quickly became an every-night starter for the Otters, and a big part of their unexpected success – growing into the top rookie goaltender in the OHL during the season. Appearing in 54 of Erie’s 68 games this season, with an .877 SV%, 3.62 GAA, and a 24-25-2-1 record – his 24 wins top among all rookie goaltenders, t-7th in the OHL, and second all-time amongst Otters rookie netminders. Lalonde also earned Midwest Division Academic Player of the Month honors from the OHL in November.

Outside of the OHL, the 17-year-old Lalonde was named a Goaltender for Canada’s National Men’s Under-18 Team at the 2022 IIHF U18 World Championship, starting one game and getting Team Canada’s lone-win in net. The native of Kingston, ON is ranked the 14th overall North American Goaltender by NHL Central Scouting heading into next month’s 2022 NHL Entry Draft.

“I’m very happy for Nolan to gain this recognition. He seized the opportunity when it presented itself.” said Adams, “His work ethic and passion on-and-off-the-ice excelled his development, and we’re very excited for his future.”

General Manager Dave Brown, who spoke highly of the rookie on Draft Day in 2020, praised Lalonde for his ability and persistence in net during his first-year.

“Nolan had a fantastic season, and responded like an all-star when thrust into the position of our everyday starter before the start of the season. His character and determination allowed him to grow by leaps and bounds this year.” said Brown, “We are thrilled and excited to watch his continued growth as both a person and a player, and to watch him help elevate us to the success we both aspire to achieve.”

The Erie Otters congratulate Nolan Lalonde on his worthy recognition as All-Rookie First Team Goaltender in the OHL.

To see all players recognized by the League with All-Rookie First Team honors, head to OntarioHockeyLeague.com.