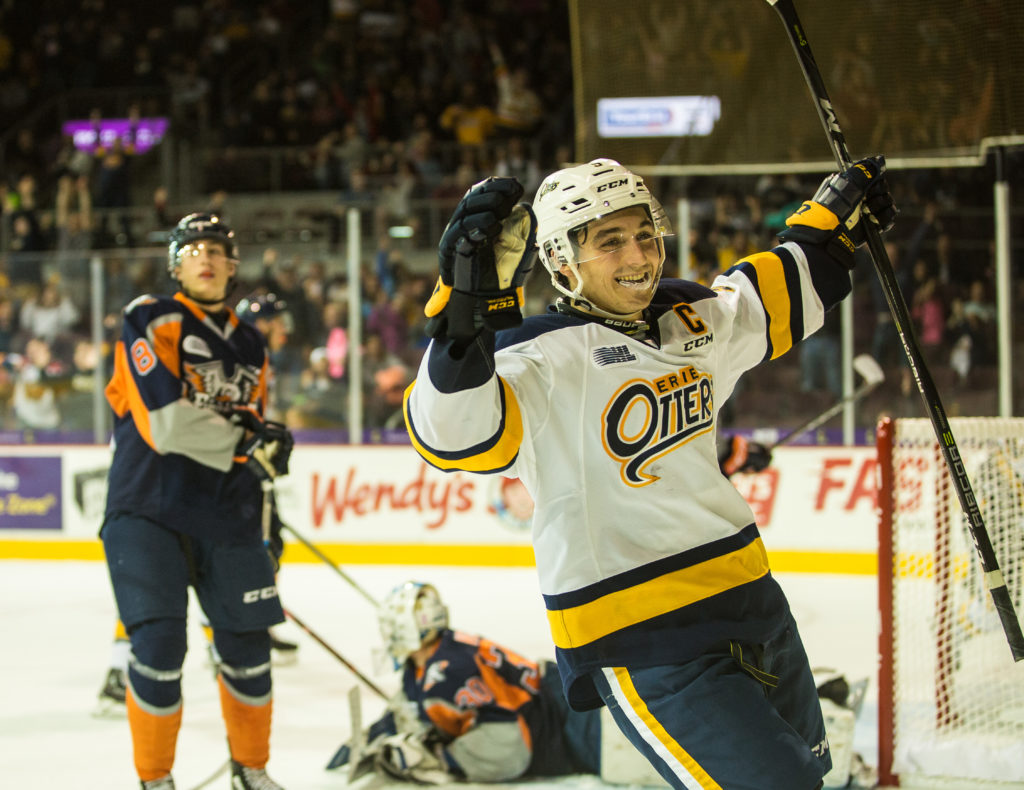 Erie, Pennsylvania – The Erie Otters opened an Ontario Hockey League season on home ice for the first time in their 23-year history, routing the Flint Firedbirds 12-1 at the Erie Insurance Arena on Saturday night.

The Otters opened the first frame with a steady offensive presence, keeping the puck in the Firebirds’ end for the majority of the period. Luke Beamish scored seven minutes in to take an early lead. After a few minutes of back and forth hockey, Ryan Martin netted his first of the year to put the Otters ahead by two. Erie wasn’t done yet as Gera Poddubnyi beat the clock to make it a 3-0 game with 43 seconds left in the first frame.

In the second stanza, play leveled out as the teams traded chances. The Otters continued to heavily outshoot the Firebirds and had a few great chances to build on their early lead.  A stretch pass at the conclusion of an Otters penalty kill left Kyle Maksimovich on a breakaway, but Firebirds goalie Luke Cavallin did not budge. Erie raced the clock once again when a high wrist shot with twelve seconds remaining hit Alex Gritz in the helmet and ricocheted behind Cavallin to make it a 4-0 game heading into the third.

The Otters kept the foot on the gas pedal as they would notch eight more goals to pad the lead, leaving only three Otters skaters who did not register a point on the evening. Emmett Sproule netted two, while Poddubnyi, Mack, and Duff each chipped in one. Otters captain Kyle Maksimovich would tickle the twine three times in the period, giving himself the first hat trick of his OHL career. Ethan Keppen stopped the bleeding by netting his first of the season, but the Otters were too much to handle as they rolled to a 12-1 victory.

The Otters will travel to Mississauga for their first road test when they meet the Steelheads on Friday, September 28.