Otters a Goal Short in Comeback Bid, Rangers Hang On 4-3 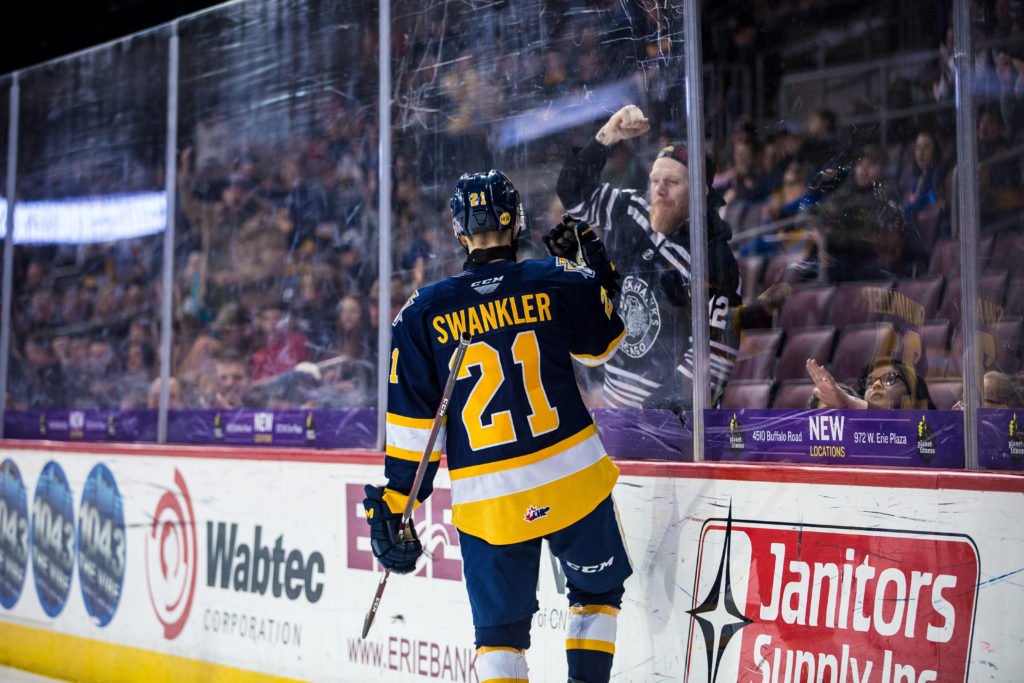 Kitchener, Ontartio – The Erie Otters dropped a 4-3 decision to the Kitchener Rangers at the Kitchener Memorial Auditorium Friday night.

Erie grabbed its first lead seven minutes and 37 seconds into the contest. Noah Sedore gained the zone up the left side and found Austen Swankler, who fired a shot over the shoulder of Jacob Ingham from the slot. Kitchener tied the game just 47 seconds later when Jonathan Yantsis scored with a forehand, backhand move on a breakaway. Erie took a 2-1 lead on a patient play from Brendan Sellan 40 seconds after Kitchener tied the game. Sellan grabbed a loose puck inside the zone and held it long enough for Jamie Drysdale to find open ice. Drysdale received the puck in the high slot and fired a blistering wrister past Ingham. With the Rangers trying to answer near the 11-minute mark, Aidan Campbell made a highlight reel save on Serron Noel to keep Erie’s 2-1 lead. Noel shot the puck from in front and Campbell lunged at the attempt to save it with his chest. Campbell stood tall late in the frame and the Otters went to intermission with the lead.

The Otters started the second period in strong defensive form and killed 98 seconds of a 5 on 3 Kitchener powerplay, but moments later, the Rangers took control. Declan McDonnell tied the game 2-2 at the 2:23 mark. Campbell made the initial stop on a one-time shot off the stick of Noel, but the puck bounced off the extended leg of Campbell for McDonnell to collect. Francesco Pinelli toe-dragged the puck around an Otter and tucked it just inside the post to pull Kitchener to a 3-2 lead at 6:08 of the middle frame. The Rangers continued their flurry with a Riley Damiani goal 55 seconds later. Erie had chances to answer in the second period, including a powerplay which saw extended zone possession, but Ingham was sharp on the Kitchener penalty kill, and the Rangers led 4-2 after 40 minutes.

Both goaltenders made impressive saves in the third period, but Erie found the net near the halfway point. Chad Yetman slipped his way into the Rangers zone while killing a penalty and tallied a short-handed, five-hole goal, pulling the Otters to within a goal. Erie successfully killed the penalty and went right to the powerplay, where Yetman was robbed by Ingham on what may have been Erie’s best chance to tie the game. The Otters got the extra-attacker on the ice in the final moments of the game but could not find the equalizer, and ultimately lost 4-3.

Erie will look to rebound Saturday, February 22, when they face the Owen Sound Attack at the Harry Lumley Bayshore Community Centre for a 7:30 p.m. affair. Owen Sound sits just two points ahead of Erie in the seventh playoff spot in the West.