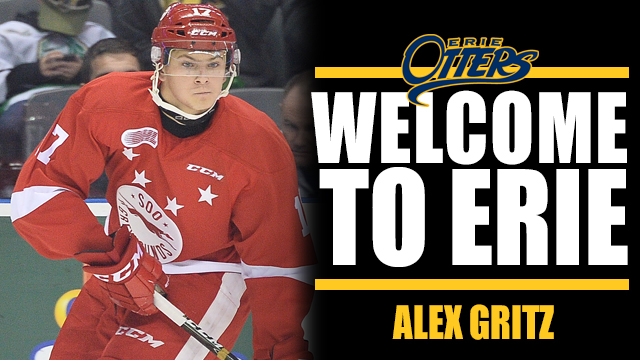 Gritz, a 6-foot, 175-pound forward, appeared in 37 regular season games with the Greyhounds during his rookie season      in 2016-17, scoring two goals while recording five points. The Cranberry Township, Pennsylvania native was originally selected by Sault Ste. Marie in the third round, 50th overall, at the 2016 OHL Priority Selection. During his draft year, the 16-year-old, left handed shot tied for his team’s lead in points with the Waterloo Wolves with 19 goals and 41 points on their way to the 2016 Alliance Championship.

“Alex is a hardworking player that makes the ice uncomfortable for his opponents,” General Manager Dave Brown said. “We felt we needed a little more jam in our forward group and Alex will improve that. He’s skilled and makes an impact on the ice, we’re excited to have him join the Otters organization.”

The Otters will be sending two picks in future OHL Priority Selections to Sault Ste. Marie in the exchange: Erie’s 3rd in 2023 and Erie’s 10th in 2021.