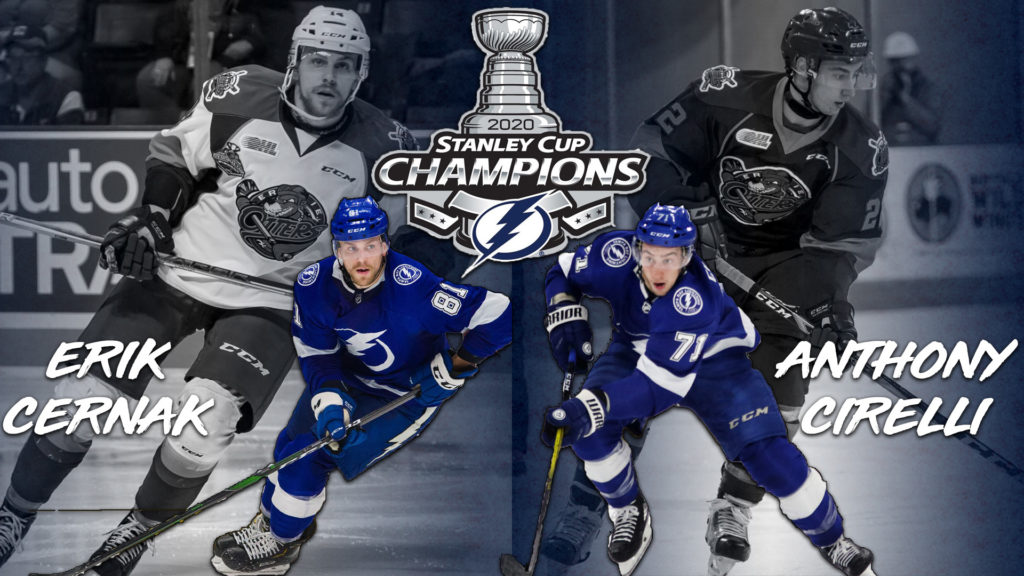 The Lightning capped-off perhaps the most unique Stanley Cup run in the NHL’s history, hoisting the Cup inside the Edmonton ‘bubble’ at Rogers Arena following a 2-0 blanking of the Dallas Stars in Game 6 of the Championship Final Monday night. Overcoming the challenges of COVID-19, they played to an overall playoff record of 16-6, eliminating the Columbus Blue Jackets, Boston Bruins and New York Islanders in Toronto before moving on to Edmonton to defeat the Stars in six games.

The Bolts required overtime on eight different occasions throughout the playoffs, going 6-2 in those affairs.

Lightning captain and Sarnia Sting graduate Steven Stamkos, who missed most of the playoffs due to injury apart from his brief appearance in Game 4 of the Stanley Cup Final that included a goal, accepted the trophy from NHL Commissioner Gary Bettman. Teammate Victor Hedman earned the Conn Smythe Trophy as NHL Playoff MVP.

Maroon, who had an assist in Monday’s Cup-clinching win, hoists the trophy for the second straight year after winning as a member of the St. Louis Blues in 2019.

Cirelli becomes a Stanley Cup champion having also won a Memorial Cup title (Oshawa 2015) along with a pair of Robertson Cup championships (Oshawa 2015, Erie 2017). Sergachev joins him in that category, having won the Memorial Cup as a member of the Windsor Spitfires in 2017.

Steven Stamkos was presented the Cup by Commissioner Gary Bettman after the Lightning’s 2-0 win against the Stars in Game 6. The captain played one postseason game because of a lower-body injury, scoring a goal in 2:47 of ice time in Game 3 of the Final.https://t.co/nrTYJp7bR6

Goodrow becomes the first Brampton/North Bay Battalion alumnus to win the Stanley Cup, doing so having been the club’s final captain during its 15-year tenure in Brampton from 1998-2013.

Zach Bogosian (Peterborough Petes) is crowned a Stanley Cup champion in his 12th professional season. Entering the 2020 playoffs, he hadn’t played a postseason matchup since he was a member of the Peterborough Petes in 2007-08.

The Championship title is Tampa Bay’s second in franchise history and first since 2004.