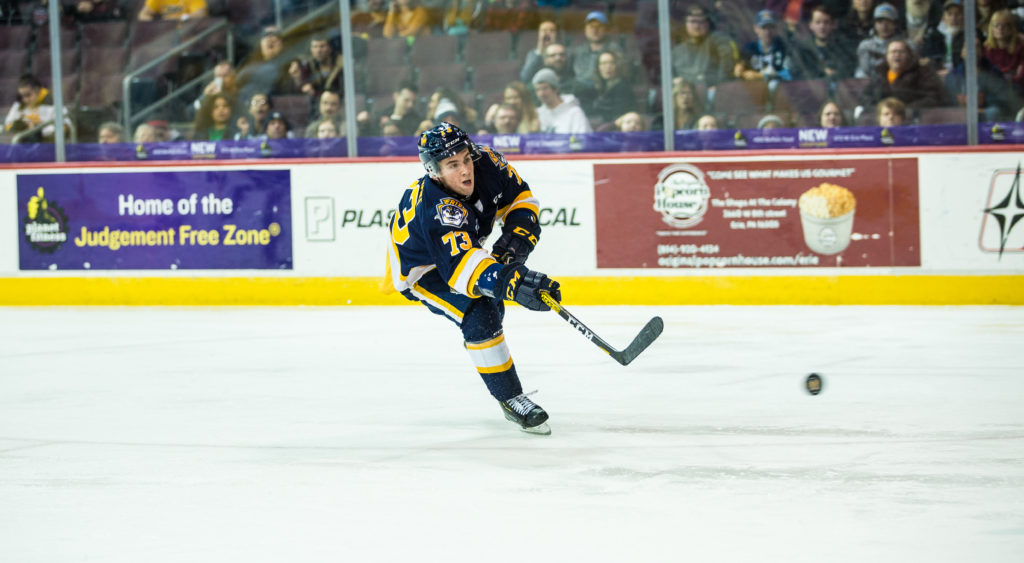 Erie, Pennsylvania – The Erie Otters climbed back into a tie for fourth in the division with two valuable points in the standings after a 5-3 triumph over the Owen Sound Attack on the back of first round pick Connor Lockhart’s first career game winning goal.

The Attack would open the scoring in the first period with their 27th first goal of a game this season when Matthew Struthers finished of a pretty passing play started by Aidan Dudas. The Otters responded 53-seconds later when Chad Yetman deflected a Cameron Morton point shot past Owen Sound goaltender Mack Guzda to tie the game at one. Matthew Struthers found himself back on the scoresheet when he was ejected from the game for a major check to the head penalty at the end of the first period with an illegal hit to Maxim Golod who left the game but returned for the next period.

Erie’s five minute power play was stymied by the Owen Sound penalty kill, but Erie would grab their first lead while five-on-five when Golod spun a beautiful twisting backhand pass to the tape of Jack Duff on the back door for the captain’s fourth goal of the season. It was a game of responses and this time the Attack answered back on the power play when Sergey Popov’s centering pass deflected off a skate and into the back of the net. Erie continued to pressure, outshooting Owen Sound 31-22 on the night, and would set up another go-ahead goal with Connor Lockhart feeding Hayden Fowler on the back door for his 16th of the season, handing Erie a 3-2 intermission lead.

The third would once again see the teams draw even as Brady Lyle fired home his 14th of the season to tie the game at three. That wouldn’t last long as Connor Lockhart sent himself on a break away after clearing his defensive zone 55 seconds later then snapping home his seventh goal of the season to put Erie up for good 4-3. Hayden Fowler would add insurance on the empty net goal with under a minute to play to secure the home team’s victory 5-3.

Erie used its game in hand on Sault Ste. Marie to distance the two teams by six points for the final playoff spot in the Western Conference. The Otters host the rematch of the weekend series with the Attack Saturday night at 7pm with a chance to climb higher in the standings.