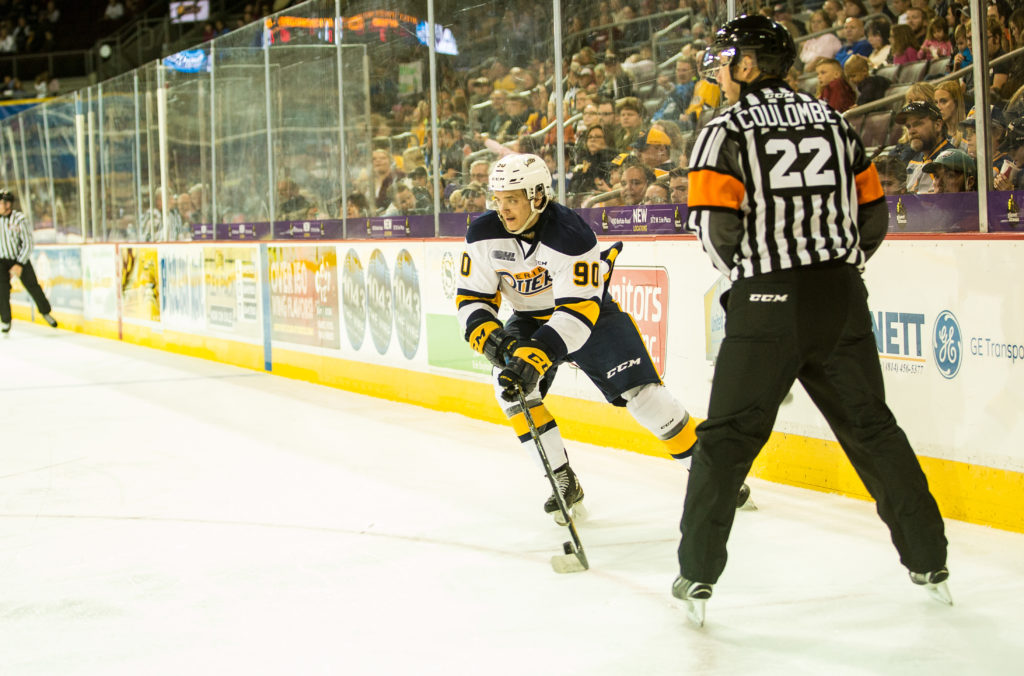 ERIE, PA – The Otters played the second of their back-to-back homestand on Sunday afternoon and hoped to build off of the thrilling overtime win from Saturday. The game got off to a great start when a Windsor player lost control of the puck and let it slide into their own empty net on a delayed penalty, giving Erie the early advantage. After each team traded opportunities on the powerplay, Will Cuylle found the back of the net and evened it up for the Spitfires, making the score even heading into the first intermission.

The second period opened with heavy pressure from the Erie forwards.  A mishandled rebound found the stick of Joseph Mack, who fired it past Michael DiPietro to put the Otters back ahead.  Around the midpoint of the period, The Spitfires evened the score once again on a powerplay goal off of a Kyle Maksimovich tripping call, and the teams headed to the locker room knotted at two.

In the final period, the teams traded opportunities for a few minutes until Kyle McDonald found the back of the net on a 2-on-1 opportunity. This was shortly followed by a powerplay opportunity where Danial Singer tallied his second goal of the weekend on a one-timed wrist shot set up by Chad Yetman.  A tripping call to Cole Purboo set the Otters up with a powerplay chance in the last minute of regulation, but failed to connect before the end of regulation.

The Otters began the Overtime period on the powerplay, but plans changed when Chad Yetman was called for hooking, giving the Spitfires a powerplay chance of their own.  After failing to find the net in overtime, the teams headed to a shootout to decide on a winner. Danial Singer scored on the Otters’ first attempt, while Daniel Murphy stopped Jordan Frasca on the first attempt for the Spitfires. The shootout was tied up in the third round by Cody Morgan, leaving Gera Poddubnyi to win the game for Erie in four rounds. Murphy stopped three of four Windsor attempts to secure the third straight win for the Otters.

The Otters will travel to Guelph where they will play their first division matchup of the season against the Storm at 7:30PM.