Otters Earn One Point, Fall to Colts in The Shootout 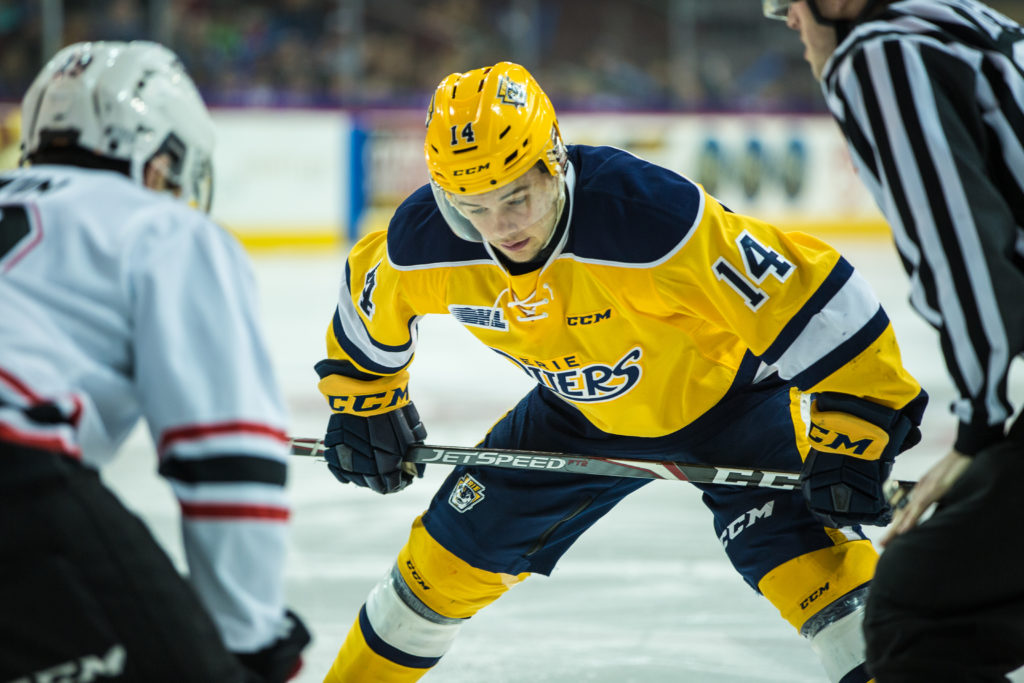 Erie, Pennsylvania – The Erie Otters fell 4-3 in a shootout to the Barrie Colts Wednesday night at the Erie Insurance Arena, but earned an important point to move three points ahead of the Soo Greyhounds for the final playoff spot in the Western Conference.

The goaltenders were in command through 20 minutes of play and Arturs Silovs saved each of the 12 shots he faced to keep Erie off the scoreboard. The Otters had great chances near the halfway point of the period, including a Hayden Fowler shot that hit the post, but they could not find the back of the net. At the other end of the ice, Aidan Campbell made a desperation dive to settle down a sustained offensive shift for Barrie late in the frame, for what was the highlight of 15 consecutive saves in the period. Barrie found the back of the net with its final shot of the stanza off the stick of Josh Nelson. Nelson received a pass from behind the net and fired the puck into the top shelf from the high slot to give the Colts a 1-0 lead with just 46.9 seconds remaining.

Fowler tied the game for Erie with a powerplay goal just over five minutes into the second. Jacob Golden fed the puck to Kyen Sopa, whose blast from the point was tipped in front of the net by Fowler. Nearly 10 minutes later, Chad Yetman sent the puck up ice to spring Sopa on a breakaway. Sopa made a hard cut in front of the net before making a backhand forehand switch up and giving the Otters a 2-1 lead. Barrie’s Jacob Frasca buried a Nicholas Porco rebound from the right circle to tie the game with 50.8 seconds remaining in the period.

The Otters broke the tie at the 8:05 mark of the third with Fowler’s second powerplay goal of the game. Yetman fired a shot from the center of the blueline and Fowler tipped it behind Silovs for his 19th of the season. Barrie pulled its goalie in the final minute and Evan Vierling scored with 32 seconds left to send the game to overtime.

Each club recorded two shots in the overtime period, but the goaltenders stood tall and forced the game to a shootout.

Silovs shut the door and Brandt Clarke scored on Barrie’s third chance to close out the game 4-3.

The Otters will look to rebound Saturday, February 15, when they host the Oshawa Generals for a 7 p.m. matchup at the Erie Insurance Arena.