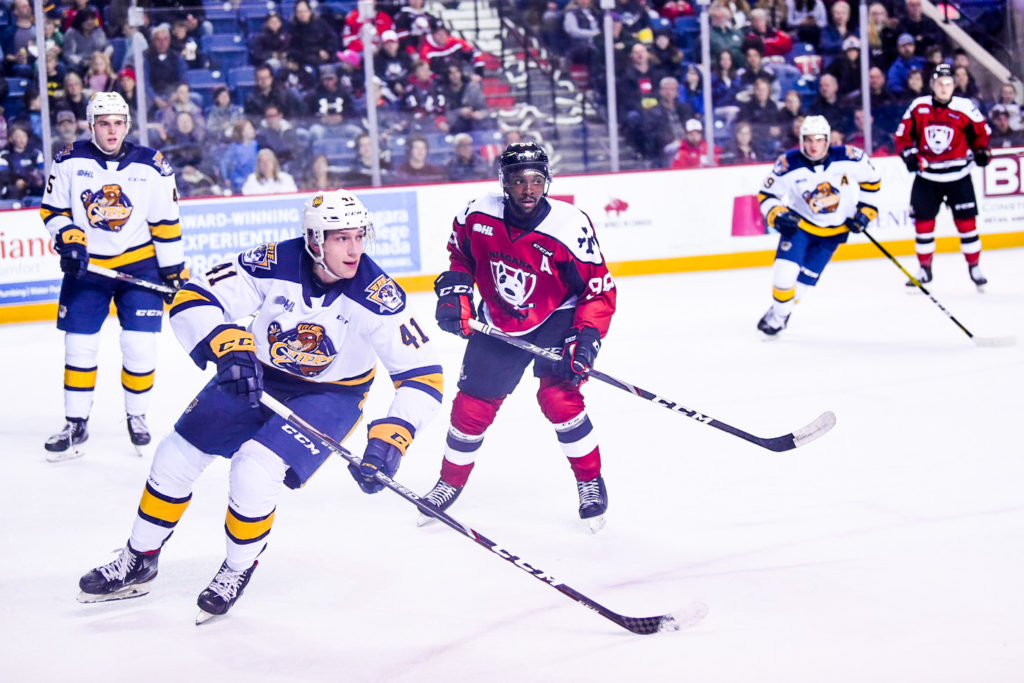 The IceDogs bolted out of the gates with seven of the first nine shots on goal, but Otters goaltender Daniel Murphy was up to the task, turning aside 13 Niagara shots in the first period. Momentum swung to the Otters when the headed to the power play on two straight occasions. With time winding down on the second chance, former IceDog Drew Hunter wristed the puck at the net where Brendan Sellan deflected the shot past the Niagara goaltender for a 1-0 lead. Chad Yetman continued his hot play when Maxim Golod fed him the puck for a quick snap at the net to score his 42nd of the year, handing Erie a 2-0 lead. Sellan wasn’t done yet as Brendan Hoffmann would spring the Erie forward onto a shorthanded opportunity late in the frame. Sellan wired home his second of the night with a laser from the tops of the circles for a 3-0 lead. Niagara finally answered with 2:59 left when Oliver Castleman finished a cross crease play on a 5-on-3 powerplay.

The second period featured a parade to the box on both sides as the game heated up to a boil. Erie would kill four Niagara power play chances during the frame, with Murphy stopping all eight shots faced. The Otters two-goal lead would carry into the third period.

Things would get interesting nearly six minutes in when Jackson Doherty beat Murphy from the right circle to draw the IceDogs within one. Chad Yetman would find himself with two glorious breakaway chances later in the third but couldn’t best Niagara netminder Andrew MacLean. The game would come down to the final minutes with the IceDogs’ net empty. The Otters clamped things down and didn’t allow any zone time, until they finally cashed in on the empty net with Austen Swankler netting his 18th of the year.

The victory keeps the Otters three points ahead of the Soo Greyhounds, who gained ground with a pair of victories in their weekend schedule, for the final playoff spot in the West. Erie can again distance themselves by five points with a victory Sunday afternoon when they host the Saginaw Spirit at 2pm for Sensory Friendly Night presented by the Autism Society of Northwestern Pennsylvania. The game will feature lowered music levels, no lighting changes, fewer announcements and a sensory friendly space for those who need it. The first 1,000 fans in attendance will receive a fidget spinner courtesy of Wm. T. Spaeder.