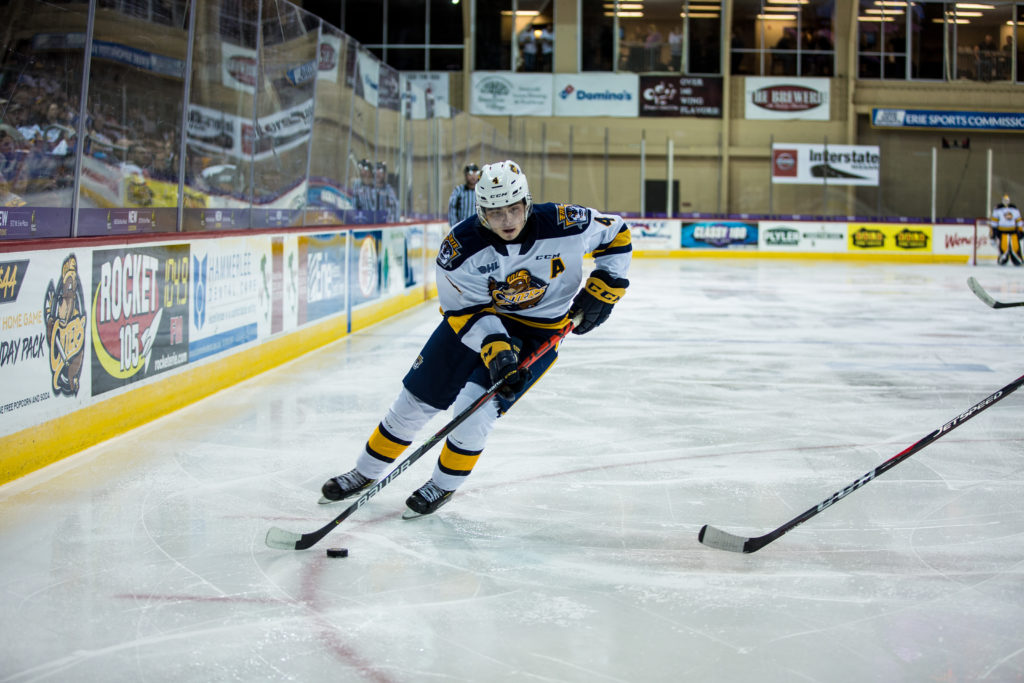 Erie, Pennsylvania – The Erie Otters dropped their first game at the Erie Insurance Arena Friday night as the reigning West Division champion Saginaw Spirit held on for a 4-2 victory.

Erie went into Friday’s game looking to continue its spotless home record this season. With just over five minutes gone in the first period, the Otters found themselves on a 5-on-3, thanks to Saginaw penalties to Blade Jenkins and Nicholas Porco. The power play made quick work of the two-man advantage with Maxim Golod scoring his third goal and tenth point of the young season. Saginaw tied the game with a goal coming off the stick of D.J. King, with 5:20 left in the period. Erie netminder Daniel Murphy stopped a Saginaw 2-on-1 opportunity with 1:28 remaining in the opening frame, keeping the score 1-1 at the end of the first.

The second period saw even play from both teams early on. For Erie, the middle stanza was highlighted by many great saves by Murphy, including a breakaway chance by Jenkins. The Otters momentum in the second period stopped with that breakaway save and Saginaw taking control by scoring two goals in 27 seconds from Danny Katic and Damien Giroux. Murphy made another great stop with 1:28 left in the period, keeping the score within reach at 3-1 heading to the third.

The Spirit controlled play for most of the third period and Saginaw forward Jake Goldowski added insurance with a one-timer under eight minutes remaining in the game. The Otters had a glimpse of hope when Golod netted his second power play goal of the night to draw the Otters within two, but it wasn’t enough as the Spirit clung to a 4-2 victory.

Jamie Drysdale collected his third multi-point game of the season with assists on both Erie goals. The Otters will continue their homestand Saturday night when they host the Kingston Frontenacs.