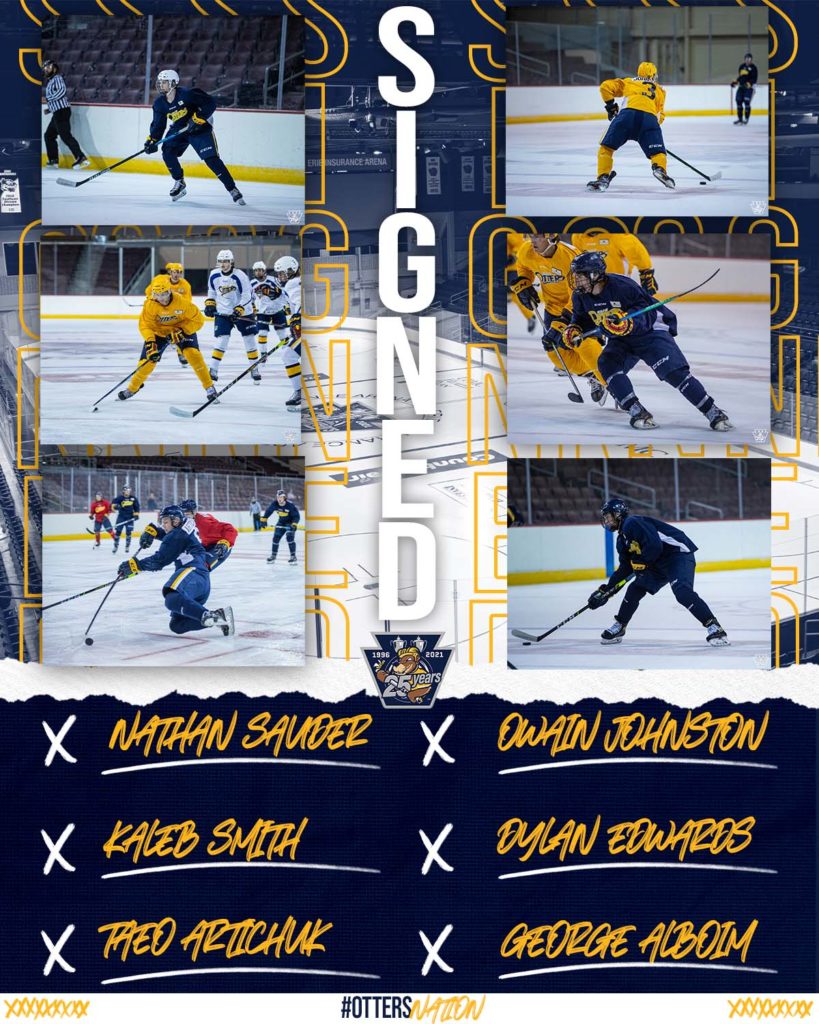 Erie, Pennsylvania – With Training Camps around the Ontario Hockey League coming to a close, and Preseason games preparing to get underway, the Erie Otters announce the signings of six players to the 2021-22 roster.

The six players – listed in chronological birthyear order by last name – who will be seeing their first OHL action on Saturday against the Saginaw Spirit, are:

Kaleb Smith, the Otters’ Sixth Round Pick of the 2020 OHL Priority Selection Draft appeared in 21 games in 2020-21. In the most recent season, Smith spent time near his hometown of Arcade (NY) with the Buffalo Jr. Sabres 18U AAA, and a stint in the United States Hockey League with the Omaha Lancers. The 6’1”, 174 lbs. right-shot Forward found his way to eight points (6G+2A) during the season.

The 70th overall pick of the 2021 OHL Priority Selection Draft, George Alboim comes to the Otters as their lone-selection of the Fourth Round. Alboim spent the 2019-20 season with the Central Ontario Wolves of the Eastern AAA Hockey League U16, where he accumulated 23 points (10G+13A) in 39 games. The right-handed Defenseman measures in at 6’2”, 174 lbs. and hails from Uxbridge (ONT).

Dylan Edwards, the Eighth Round Pick of the Otters in the 2021 OHL Priority Selection Draft, comes from the Toronto Titans of the GTHL U16. Noted as ‘one of the hardest-working players in the Draft’, Edwards measures in at 5’7”, 150 lbs. as a Forward.

54th Overall in the 2021 OHL Priority Selection Draft, Nathan Sauder was the first Defenseman taken by the Otters. A 6’1”, 190 lbs. righty from Mississauga (ONT), Sauder was drafted from his hometown after playing for the Mississauga Rebels in the 2019-20 season. During the ’19 season, Sauder put up 10 points (4G+6A) in 49 games. Sauder is regarded for his ability to mix his physical play with his speed.

The Erie Otters are excited to officially welcome these six young men to the team ahead of the start of Preseason games.

Regular Season action kicks off for the Otters on October 9 in Flint (MI) against the Firebirds, before returning home on October 23 to welcome fans for the 25th Season of Otters Hockey, taking on Saginaw.