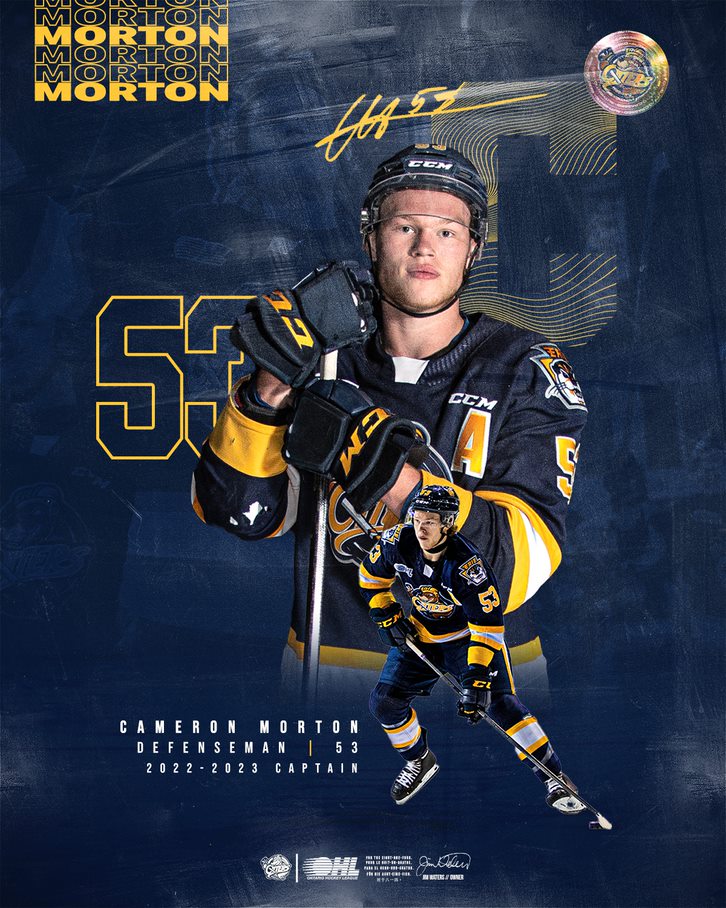 Erie, Pennsylvania – The new Ontario Hockey League season kicks off tonight for the Erie Otters, as the team travels to Peterborough, Ontario. With the dawn of the new season, comes the naming of the new leadership core for the team in its 26th season.

While a number of new faces adorn the Otters’ lineup, familiar faces and veteran players will be able to bridge the gap between old and new.

Captaincy is nothing new to Overage Defenseman Cameron Morton – the 20-year-old Defenseman spent the 2021-22 season as the team’s Alternate Captain. The 124th overall pick in the 2018 OHL Priority Selection Draft, Morton enters his third season with the Otters as a blueliner noted for being gritty and hard-to-play against by his constituents.

This will be Morton’s second time wearing the ‘C’ in his career, after spending the 2018-19 season as captain of the Greater Kingston Jr. Frontenacs where he posted 24 points (5G+19A) in 30 games. During the season, Morton lead his team to an OMHA championship and was named Top Defenseman at the Ontario Hockey Federation Midget AAA Championships.

Morton is one of the most imposing players on the Otters’ roster, and will look to continue to lead the way physically as a leader on the backend.

“First off, I’m truly honored to be put in the position to help lead this team for the season.” said Morton “I want to be a leader that shows up to the rink with something to prove, and leads by example at-and-away from the rink.”

Overage Forward and dynamic-scoring Forward Elias Cohen will serve as the team’s full-time Alternate Captain for the 2022-23 season. As one of the leading-scorers on the team in the 2021-22 season, his impact on the ice is as measurable in magnitude as what he means to the team off-the-ice.

This will be Cohen’s first time being lettered in his Otters career.

A threat in the offensive end, and a big character piece for the Erie Otters, Overage Forward Noah Sedore will wear the ‘A’ for the team in his final season in NWPA. The leading-scorer during the team’s preseason in 2022-23, Sedore came into camp for the new year with the goal and expectation of helping lead the Otters back to the post-season.

This will be Sedore’s first time being lettered in his Otters career.

A two-way Defenseman with a mean shot from the blue line, second-year Otter Spencer Sova will share the duties as an Alternate Captain for the Erie Otters in the 2022-23 season. Logging critical minutes as one of the team’s top blueliners in his rookie season of 2021-22, Sova will look to continue to build upon the traits he’s learned from his defensemen leader counterparts.

This will be Sova’s first time being lettered in his Otters career.

Arguably the OHL’s most dynamic, breakout player during the 2021-22 season, Christian Kyrou will wear the stitched ‘A’ on his jersey in the new season. Kyrou showcased tremendous skill and ability last season, and transitioned from a player unranked in the NHL Central Scouting’s Draft Rankings, to being drafted 50th Overall to the Dallas Stars in the 2022 NHL Entry Draft.

This will be Kyrou’s first time being lettered in his Otters career.

While the new year may only represent the second season of Forward Carey Terrance, he made the most of his true-rookie season in 2021-22. During his first season, Terrance developed into a reliable centerman and opportunistic scorer – while also being able to represent the Otters and OHL in high-level international tournaments. With expectations for a huge Sophomore season on-and-off the ice, Terrance will represent the youngest member of the Erie leadership corps.

This will be Terrance’s first time being lettered in his Otters career.

Head Coach BJ Adams made the captaincy announcement to the players prior to Thursday night’s season opener. The decision was one met with great rejoice from the team, and made with high regard from the second-year head coach.

“Our leadership group, lead by Cam, exemplifies the culture within our organization. They put the team before themselves, and value their teammates.” said Adams, “They will be great representatives of the Otters organization and the city of Erie.”

The newly-knighted captains will get their first chance as lettered-leaders on the ice on Thursday night in Peterborough, as the Otters kick off the OHL season with the first of four-straight on the road in the Eastern Conference. Fans will be able to see the captains and the Otters in-person for the first time at the Home Opener on October 8.