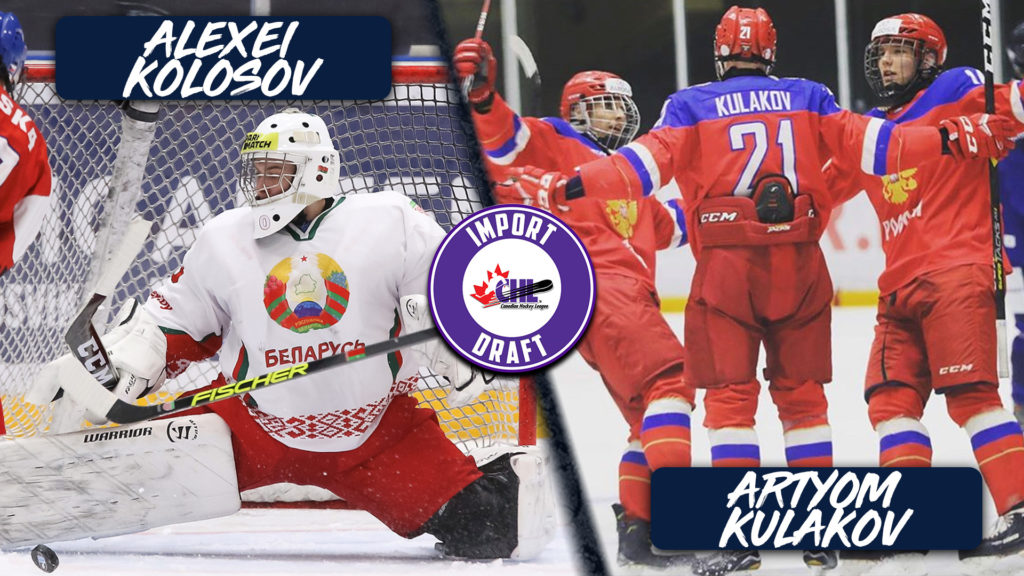 Erie, Pennsylvania – The Erie Otters announced today that the team has made two selections during the annual Canadian Hockey League Import Draft, choosing Belarusian goaltender Alexei Kolosov (pronounced ah-LEK-see-ay COAL-ah-soff) in the first round and Russian defenseman Artyom Kulakov (pronounced AR-tem KOO-lah-koff) in the second round.

“Our assistant director of hockey operations, Scott Grieve, has put a great deal of effort into narrowing our selections down to an elite group, and we are pleased to have selected these two young men,” general manager Dave Brown said. “Both Alexei and Artyom have a great deal of skill in their respective positions and have international experience. I can’t wait to see them both in training camp and in an Otters uniform.”

Kolosov, a 6-foot-1, 185-pound goaltender was selected 22nd overall by the Otters in the first round of this year’s CHL Import Draft. The Minsk, Belarus native spent the 2019-20 season with the Belarus U18 and U20 national teams and competed at the 2020 World Junior Championship Division 1A U20 tournament where he won a bronze medal with his native country. His 2.28 goals against average and .910 save percentage with the U18 program and 2.11 GAA and .930 save percentage with the U20 program both finished in the top-ten of goaltender stat categories in the Belarus 2 league. The 18-year-old is the fourth import goaltender ever selected by the Erie Otters following Oscar Dansk, Ramis Sadikov and Jaroslav Janus, and is also the first Belarus native to be selected by the franchise. Kolosov is an eligible prospect for the upcoming 2020 NHL Entry Draft.

Kulakov comes to the Otters after being selected 82nd overall in the second round of this year’s import draft. The 6-foot-2, 174-pound defenseman served as an alternate captain for his Spartak St. Petersburg U17 squad during the 2019-20 season. Artyom, a Bolshoy Kamen, Russia native, posted 40 points (10G-30A) in 29 games played last season to lead all defensemen in scoring in the Russia U17 league. Kulakov is the first import defenseman taken by the Erie Otters since selecting current Tampa Bay Lightning blueliner Erik Cernak in 2015. The 17-year-old is eligible for the 2021 NHL Entry Draft.