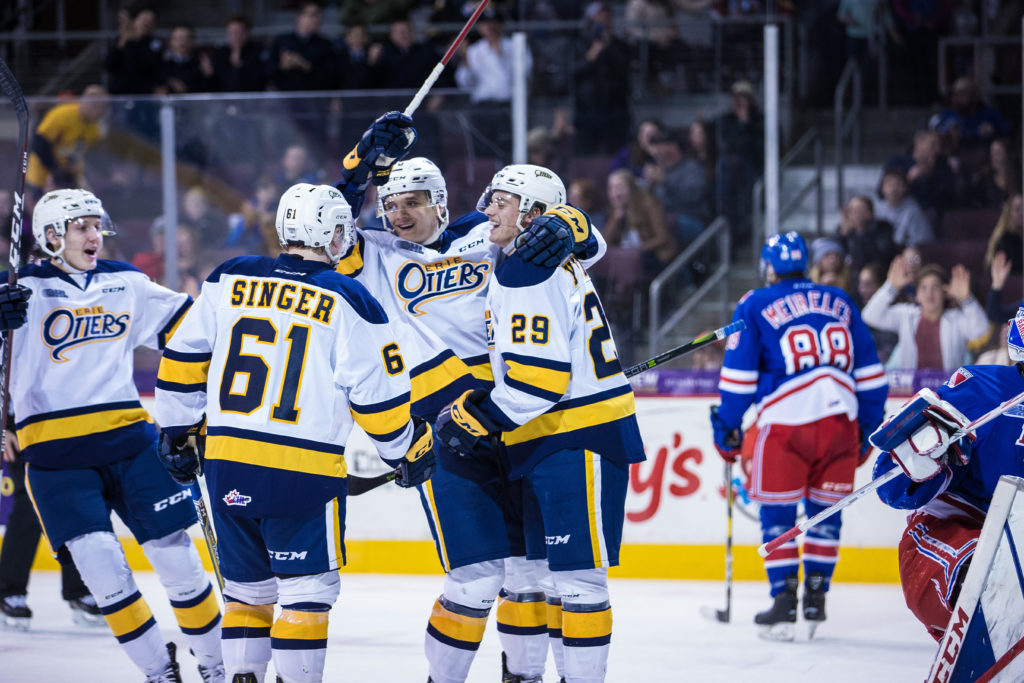 ERIE, PA – The Otters returned home on Wednesday for the first time in two weeks to take on their division rival Kitchener Rangers at 11AM for their annual School Day Game. Things got going early for Erie when Petr Cajka scored a shorthanded goal to put the home team ahead. Kitchener responded quickly on a 5-on-3 opportunity just minutes later to tie the game up. The teams traded opportunities until Jonathan Yantsis scored near the end of the period, putting Kitchener ahead until Brendan Kischnick scored just after to tie the game up headed into the first intermission.

In the early stages of the second period, Kitchener broke through with goals from Jonathan Yantsis and Rickard Hugg, putting them ahead by two. The Otters responded quickly with a goal from Petr Cajka when a blocked shot rose high in the air and fell directly behind Kitchener goaltender Luke Richardson, cutting the lead to one.

In the third, the teams traded pressure in each other’s zone until Chad Yetman scored two goals exactly four minutes apart to put the Otters ahead 5-4. Erie managed to fend off the Rangers’ attack and sealed the victory with a last second goal from Kyle Maksimovich

With Kyle Maksimovich’s goal and two assists, he now has 251 points in his OHL career and is now 8th all-time in scoring for Erie.

Single game tickets for the 2018-19 season are on sale now. Erie Otters season tickets and flex packages are also available and can be purchased in person at the Erie Otters front office located at 201 E. 8thStreet in Erie, or by calling 814-455-7779. For the latest Otters news, visit www.ottershockey.com, or follow the team on Facebook (www.facebook.com/erieottershockey), Twitter (@ErieOtters) and Instagram (@ErieOtters).