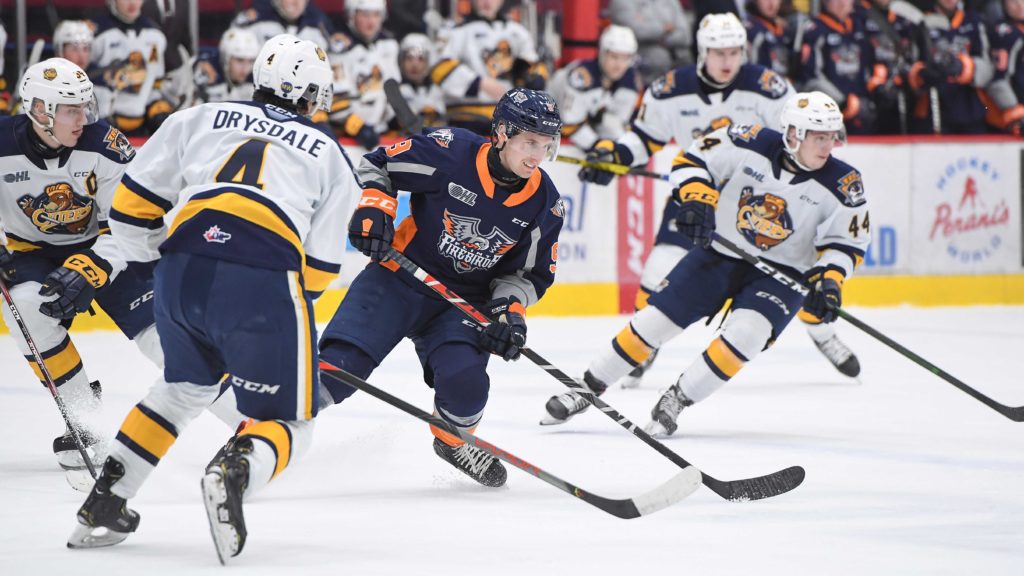 Flint, Michigan – The Erie Otters rallied to grab a point in overtime to remain in the Western Conference playoff seeding, but it was the Flint Firebirds securing the victory 4-3 on Riley McCourt’s hat trick goal in overtime for the 4-3 decision.

The game got off to a great pace with the team’s quickly pushing things early, despite it being the first meeting of the season between the two club. Otters goaltender Daniel Murphy stopped an early Brennan Othmann breakaway to keep the game scoreless under five minutes in. Anthony Popovich wasn’t to be outshined as he answered with a pair of stops in tight on Erie’s Connor Lockhart and Mathew MacDougal to keep the game scoreless through one.

Riley McCourt would kick off his career night by opening the scoring with his 14th of the season off a sneaky shot from the left half-wall that bounced off the far post and into the back of the net for the Firebirds 1-0 lead. Flint extended the lead while skating four-on-four when Connor Roberts sprung McCourt on a breakaway, where the defender snapped home his second of the night past the blocker of Murphy. Things got feisty late in the frame starting with Hayden Fowler’s blindsiding penalty against Flint’s Ty Dellandrea, setting off a chain of postwhistle scrums. Fowler’s night came to an end on the play as he was served five minutes and a game misconduct. While the Otters top ranked penalty kill went to work, Erie began its comeback bid with a shorthanded goal from Daniel D’Amato to half the lead with under 30 seconds to play in the period. Erie trailed 2-1 through forty minutes.

The Otters would kill the remaining time on the major penalty, and then another minor early in the third for a perfect 3-for-3 penalty kill effort on the night. Shortly after returning to even strength Austen Swankler would find a rebound in front of the net from a Jamie Drysdale point shot and bang home his 12th goal of the year to tie the game at two. Flint would jump ahead once again in the final five minutes with Othmann potting his 11th of the season on a shot from the right-wing circle. With time winding down, Erie was forced to pull their goaltender looking to tie the game with possession in the offensive zone. Jacob Golden would corral the puck at the point and unleash a low shot with the rebound creating havoc in front, where Maxim Golod would get the final touch on the puck to slip it across the goal line for the equalizer with 1:22 remaining on the clock. The final seconds of regulation would set up for an interesting overtime as Firebirds forward Jack Wismer sent the puck over the glass to hand the Otters a power play that would carry over into the extra frame.

Erie found chances in the overtime but couldn’t best Popovich who stopped two Otters shots in the extra five minutes, including a sprawling save to deny Chad Yetman the game winner on a two-on-one break. Flint would sprint into Erie ice with time winding down where Jake Durham would set up McCourt for his third of the night and game winner in the right-wing circle with a perfectly placed on-time pass.

The point keeps the Otters one point ahead of the Soo Greyhounds for the eighth seed in the Western Conference with two games in hand. Erie trails the Owen Sound Attack by just one point for seventh, points they can make up Saturday night when they visit the Saginaw Spirit at 7:05.