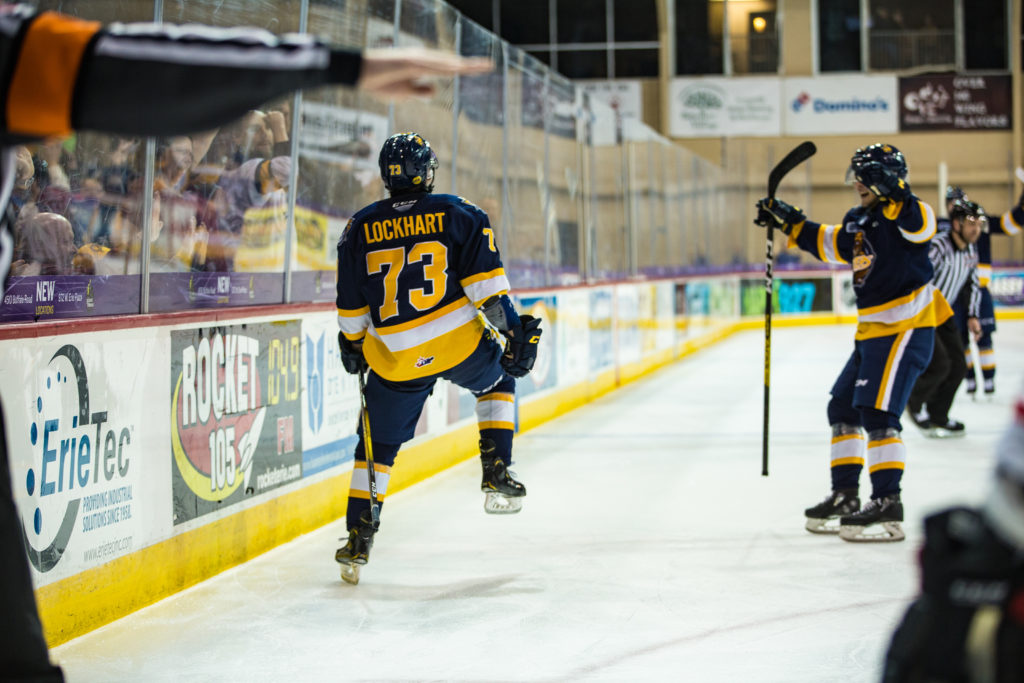 Guelph, Ontario – The Erie Otters defeated the Guelph Storm 4-2 after erasing a 2-1 Storm lead in the second period Wednesday night at the Sleeman Centre in an important western conference battle.

Guelph took its first lead six and a half minutes into the game when Cedric Ralph scored on the powerplay by banging in a rebound in front of Aidan Campbell’s crease. Chad Yetman answered for the Otters with his 29th of the season, scoring from the left circle on a set up from Maxim Golod and Connor Lockhart at the 14:01 mark of the frame. Guelph would jump back in front for a 2-1 intermission lead when Pavel Gogolev rifled home shot from the right circle on an odd man break.

The Otters needed just 39 seconds in the second period to flip the script on the Storm, netting a pair of goals on a late period frenzy for a 3-2 lead  First Lockhart tallied his eighth goal of the campaign to tie the game 2-2, when Golod dished to the Erie 2019 first round pick for a one timer inside the circles. Erie then grabbed control of the game on the rush when Jacob Golden snapped home his third of the year from the high slot, with Elias Cohen and Mathew MacDougall picking up helpers.

The Storm fought back in the third period, but Campbell stood tall in net stopping all 11 shots faced to preserve the lead. Golden made an important defensive play by clearing a puck off the goal line with just over nine minutes remaining in the game with Guelph crashing the cage seeking the equalizer. Still trying to tie the game late, Guelph pulled their netminder for the extra attacker, but could not keep control. Kyen Sopa carried the puck into the neutral zone before attempting to shoot for the empty cage. Golod retrieved the bouncing puck and gave the puck to Yetman who punctuated the Erie win with his second goal of the game and a 4-2 decision.

Yetman’s two-goal effort puts him at the 30 goal plateau for the first time in his OHL career. With the win Wednesday, Erie climbed to within a single point of Owen Sound for the seventh playoff spot in the West, and two points behind Guelph for the sixth seed.

The Otters will continue their push for the playoffs Friday, February 7, when they host the Flint Firebirds for a 7 p.m. game at the Erie Insurance Arena.