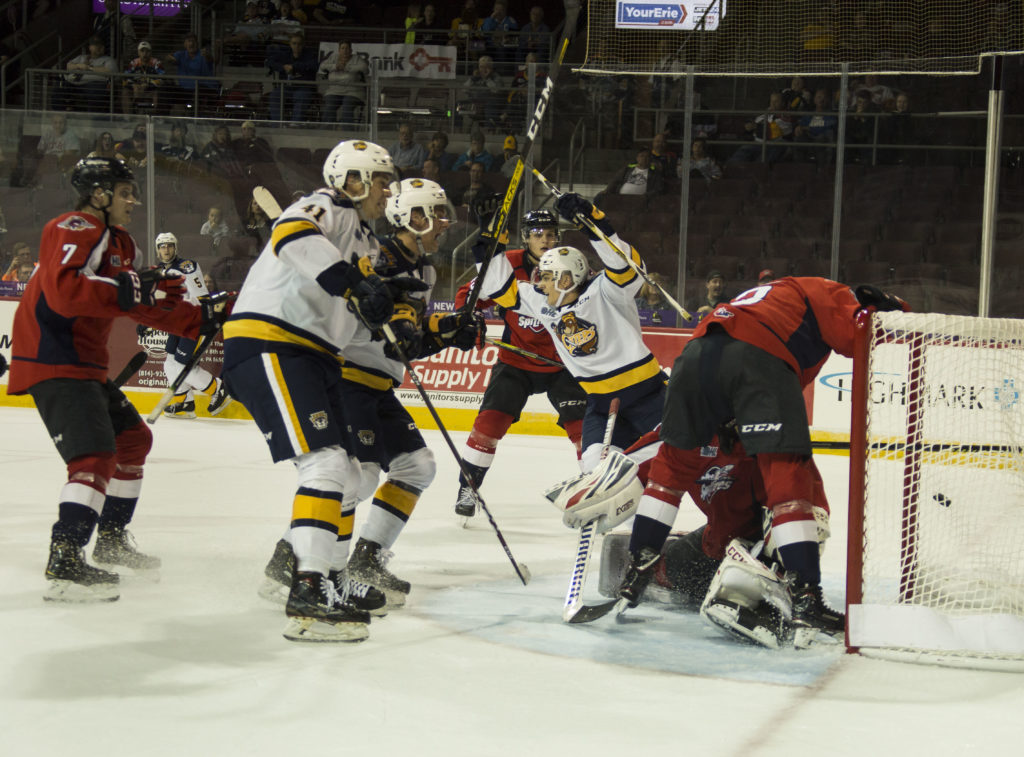 Erie, Pennsylvania – The Erie Otters continue to make the most out of their home-ice by ending a two-game road losing skid with a 6-3 decision over the Windsor Spitfires Saturday night. At the Erie Insurance Arena.

Playing its third game in as many nights, Erie didn’t show any signs of fatigue as the Otters opened the scoring just 3:28 into the first period. D’Amato got the Otters on the board first, with assists coming from Sproule and Cohen. Windsor answered back nearly seven minutes later with a cross-crease one-timer from Zito to McDonald. The rest of the period was all Erie, as Jamie Drysdale scored off of a beautiful passing play between, he, Golod and Swankler. Chad Yetman would add to the lead with a powerplay goal, assisted by Golod and Drysdale, making the score 3-1 after one.

Early in the second period, Windsor’s Connor Corcoran took a slashing penalty and the Spitfires penalty killers slipped past Erie and went the length of the ice, forcing Otters goaltender Campbell to stop a short-handed, 2-on-0 breakaway chance. Campbell’s play during the second highlighted most of the period. On a sequence during the 14th minute of the middle frame, Campbell came up big again stopping two shots from the slot; however, the Otters couldn’t clear the zone and Windsor cut the lead to one off of a goal by Corcoran, assisted by Angle and Purboo. Less than a minute later, Erie regained the two-goal lead with a goal off the stick of Henry, assisted by D’Amato and Lockhart. After stopping another short-handed 2-on-0 attempt by Windsor, Campbell helped the Otters take their two-goal lead into the third.

The Otters provided some insurance with Chad Yetman netting his second, and the powerplay’s second of the game during a 5-on-3, at the 4:44 mark of the third period. Windsor cut the Otters lead to two again, less than three minutes later. Austen Swankler would slam the door shut bouncing in his first career OHL goal for the Otters, adding a third power play goal on the night.

Campbell stopped 27 shots on the way to his second OHL victory. Jamie Drysdale added another multipoint evening with three points (1G-2A). Maxim Golod added three assists on the night for seven on the season, the second most in the league on the year.

The Otters continue their five-game homestand next week with a pair of games at the Erie Insurance Arena starting with the Saginaw Spirit Friday night at 7pm.