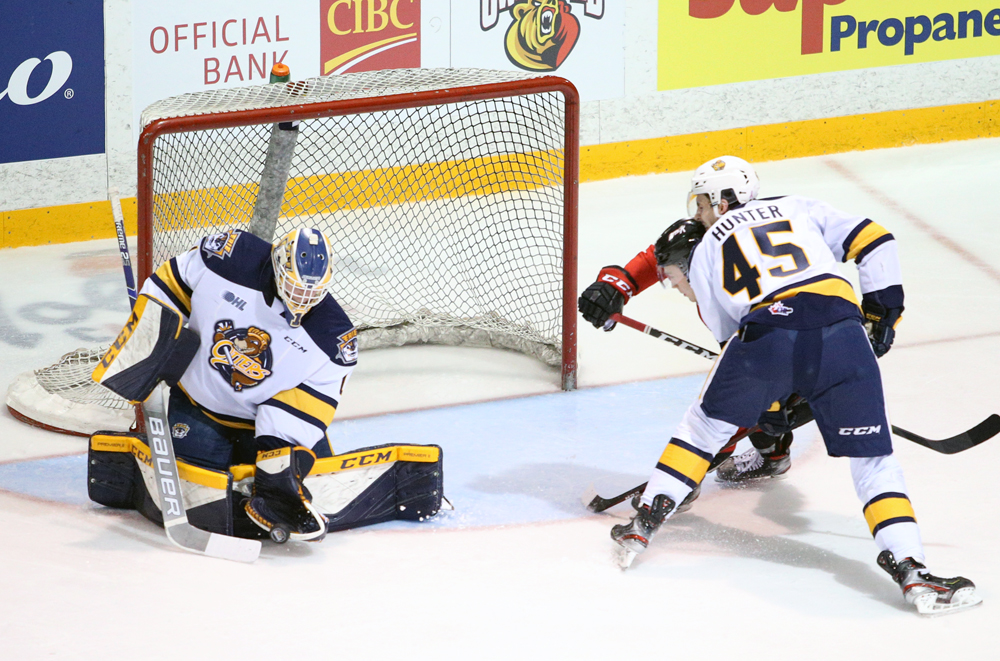 Owen Sound, Ontario – The Erie Otters rebounded Saturday night with an offensively charged effort, pouring seven goals on the Owen Sound Attack for a 7-4 victory to draw into a tie for fourth in the Midwest Division with 59 points in the standings.

Erie set the tone early with Jack Duff delivering a thunderous body check on Owen Sound forward Ethan Burroughs at the Otters blue line that led to Stepon Machacek instigating a fight with Duff that sent Erie to their first power play of the night. On the man advantage Maxim Golod would snap home his 22nd of the year for a 1-0 lead just 3:10 into the evening. The power play stayed hot and cashed in on its second chance of the night when Brendan Sellan whacked home a power play marker later in the frame for a 2-0 lead. Barrett Kirwin would cut the lead in half before the end of the period, making it 2-1 Otters after one period.

Kirwin would once again light the lamp, this time on the power play, to tie the game early in the second period. Chad Yetman responded 58-seconds later with a shorthanded goal to reclaim the lead 3-2, his second straight game with a shorthanded goal. The Attack were up the challenge and again tied the game up with Brady Lyle finishing off a nifty pass from Machacek to even the game at three. Erie continued their pace and would be rewarded with a pair of goals from Austen Swankler late in the period in a span of 1:06. First, Swankler would steal a puck at the Attack blue line where he’d carry it into the zone then rip home the go-ahead goal from the right circle. 66-seconds later Erie would rush into the offensive zone four men strong, then Brendan Hoffmann would put the puck on Swankler’s tape for a backdoor tap-in, handing the Otters a 5-3 lead with forty minutes in the books.

The third period began with more of the same, while shorthanded the Otters would force a turnover in the neutral zone with Brendan Sellan darting to the Attack zone on a break where he’d wrist home Erie’s second shorthanded goal of the night to extend the lead to 6-3, giving Sellan his first career two-goal game. Moments later Chad Yetman would steal another Owen Sound pass at the home team’s circles, then crashed the net to muscle in his second of the night to end Mack Guzda’s night early and extend the lead to 7-3. By the time the dust settled the Otters skated away with a 7-4 victory and climbed into a tie with Owen Sound for fourth in the division with 59 points each, and increase their lead over the Soo Greyhounds to five points on the final Western Conference playoff positions.

Swankler recorded his fourth multi-goal game of the season. Jacob Golden matched his career high with three assists on the evening. Yetman’s pair of goals extended his goal scoring streak in to a fourth game. Goaltender Daniel Murphy stopped 35 shots for his 14th win of the season.

The Otters and Attack will meet again Sunday afternoon at 2pm to round out the season series at the Bayshore Community Centre.