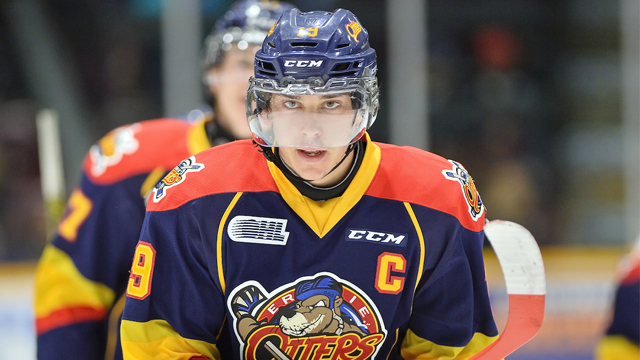 In a matchup against fellow Western Conference powerhouse and rival London Knights, the Erie Otters played the last game of their brief homestand looking to extend their winning-streak to eleven games. With their starters out of the lineup, Erie and London turned to their backup goaltenders, Joseph Murdaca and Tyler Johnson, respectively. Murdaca made 16 saves on 17 shots and Alex DeBrincat scored his 100th point as the Otters defeated the Knights 5-1.

The first period saw nearly fifteen minutes of scoreless hockey, as the Otters and Knights–two teams with the highest-powered offenses in the league–tested the goaltenders. Johnson, starting for London in lieu of Calgary Flames prospect Tyler Parsons, made seven saves early in the game, including several during an Otters’ four-minute man-advantage. But, just as the extended power play had ended, Alex DeBrincat retrieved the puck at the left faceoff circle and took a hard shot on net. Johnson was unable to get across the crease in time to stop the puck, and the Otters took a 1-0 lead late in the period. Then, just minutes later, Erie’s Warren Foegele capitalized on London’s defensive miscue in their own end: Johnson and his defenders miscommunicated behind the net, leaving Foegele with a good chance; his shot slipped through Johnson–diving back to the crease–to give the Otters a 2-0 lead going into the second period.

The Otters wasted no time getting on the board in the second period: Darren Raddysh, skating in from the point, took a stretch pass from his brother Taylor and rifled the puck over Johnson’s shoulder for the 3-0 lead. Then, Erie’s Alex DeBrincat entered the London zone with speed, left the puck for Dylan Strome–who hammered it through the goalie to make the score 4-0. The Knights would score in the final seconds of the period, however, as Evan Bouchard’s shot from the point bounced through Murdaca. The Otters headed off for the second intermission with the three goal lead.

The Knights bounced back early in the third period, putting several shots on Erie goaltender Murdaca as they tried to get back into the contest. Murdaca was equal to the task, however, and the Otters stormed back the other way: Strome, after exchanging his dropped stick (which was then picked up by a Knight) for one of London’s, wheeled to the front of the net and scored, making it 5-1 in the second half of the period. The Knights were unable to muster a comeback, and the Otters won their eleventh straight with a score of 5-1.

For the Otters, Dylan Strome scored two goals and one assist; Alex DeBrincat scored one goal and added two assists; Darren Raddysh scored a goal and an assist; and Taylor Raddysh notched two assists. Joe Murdaca made 16 saves on 17 shots in the victory. DeBrincat’s assist on Strome’s second goal of the night was his 100th point this season–the first player in the OHL to reach the marker.

Evan Bouchard scored the Knights’ lone goal, and Tyler Johnson made 26 saves on 31 shots in the loss.

The Otters go on the road to face the Mississauga Steelheads on Friday, February 17; they’ll look to extend their winning streak to twelve games.

For more information on the Erie Otters, contact Aaron Cooney at aaron@ottershockey.com