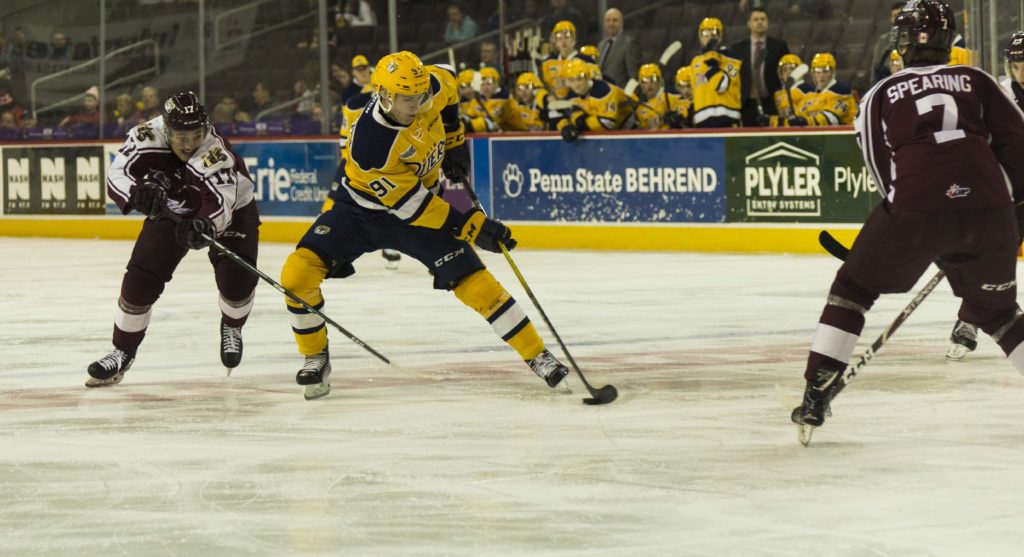 The Otters went to work early on the road with a solid cycle game that saw Hayden Fowler work the puck to Cameron Morton at the left point for a shot the snuck through Peterborough goaltender Hunter Jones for the games opening tally. Under five minutes later, in a near carbon copy play, Erie again cycled the puck low to high to find Kurtis Henry at the same point where his shot was deflected by Connor Lockhart to hand the Otters a 2-0 lead that would stand into the intermission.

Erie carried their momentum into the middle frame and took advantage of their first power play chance of the night. Connor Lockhart took over control of the puck at the left-wing circle and fired a laser beam over Jones’ shoulder for his first career two-goal game and extended the team’s lead to 3-0. The Otters team game rolled as Erie limited Peterborough to just three shots on goal in the period, with Daniel Murphy coming up big when needed with a breakaway save on Keegan McMullen following a defensive zone giveaway. Buzzing late in the second, Erie once again found an open man at the point, this time it was Jacob Golden blasting home a point shot for his first goal of the season. Erie led 4-0 through forty minutes of play.

Looking for a spark, the Petes made a change in goaltending with Tye Austin replacing Hunter Jones between the pipes to start the third period. The swap would spark the home team as they fired 12 shots on Erie netminder Daniel Murphy, who was equal to the task. Erie would hammer the final nail in the coffin with just under five minutes to play when Daniel D’Amato snapped home his 12th of the year to down the CHL top-ten Peterborough squad 5-0.

Murphy’s shutout marks the first time in his OHL career that he posted multiple shutouts in one season. Erie’s top ranked penalty kill went 6/6 on the night, including a late third period 5-on-3 disadvantage to preserve the shutout victory. Erie forward Brendan Sellan appeared in his 100th career OHL game Thursday night.

The Otters continue on their Eastern Ontario road swing with their only stop in Kingston of the season to visit the Frontenacs Friday, January 3rd at 7p.m.