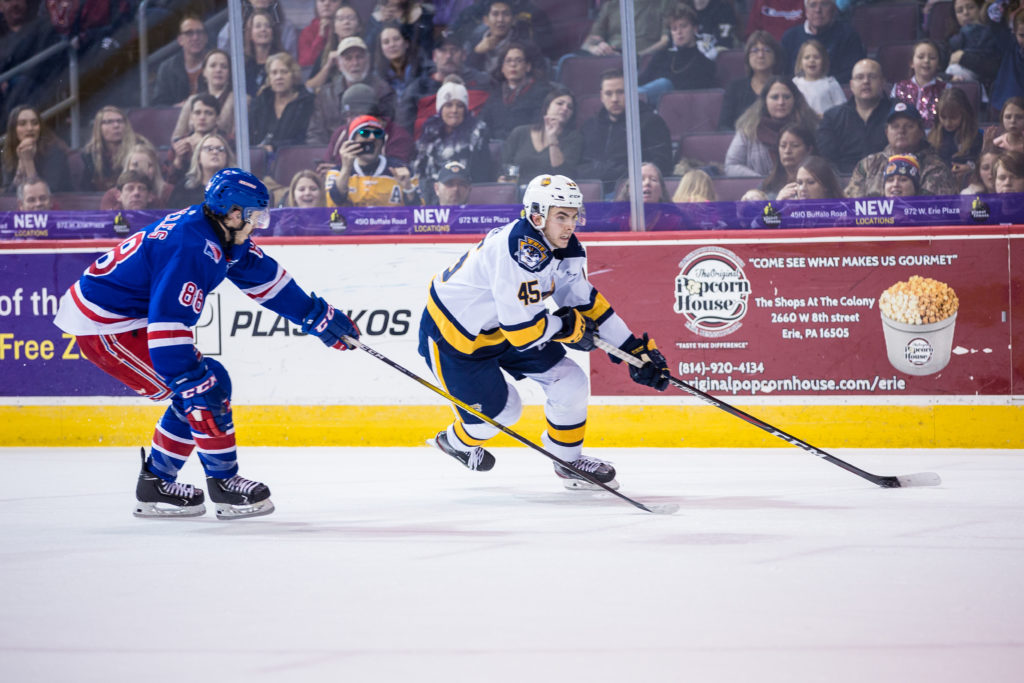 Kitchener, Ontario – The Erie Otters fired 38 shots on goal Tuesday night at the Kitchener Memorial Auditorium, but Kitchener Rangers goaltender Jacob Ingham turned aside 37 of them to secure a 3-1 victory for the home squad.
The Rangers kicked things off early with Liam Hawel snapping home his 15th of the year from the left circle 71 seconds into the game for an early 1-0 lead. Erie’s penalty kill unit answered with a shorthanded goal from Maxim Golod to tie the game at one. The same powerplay would see Kitchener answer back 34 seconds later with Donovan Sebrango putting the Rangers up 2-1 on his sixth of the year. Erie directed 20 shots on goal in the first period but could only solve Ingham once as the Otters trailed 2-1 after 20 minutes.
Erie again carried the pace in the second period and worked to create numerous scoring chances. Austen Swankler was turned aside on a breakaway by the blocker of Ingham early in the frame. While killing another penalty the Otters generated a 2-on-0 break that saw Kyen Sopa hit the post on a cross-crease pass from Chad Yetman. Erie found themselves down by the same 2-1 score after two periods.

Kitchener clamped down in the third period, limiting Erie to just five shots on goal. Erie continued to sniff the net and came close to tying the game on their three power play chances in the third. The game would come down to its final moments where the Otters pulled goaltender Daniel Murphy for the extra attacker, only to have Liam Hawel dash their hopes of a comeback with his empty net goal and second of the night, downing Erie 3-1.
Golod’s goal continues his streak of avoiding going two consecutive games without a point after being blanked Saturday night; he’s been held pointless in just nine games this season. Jacob Golden and Drew Hunter both suited up for their 200th career regular season OHL games on the evening.
The Otters have the chance to bounce back right away midweek as they host the Barrie Colts at the Erie Insurance Arena Wednesday, February 12th at 7pm.
Single game tickets for the 2019-20 season are on sale now. Erie Otters season tickets and flex packages are also available and can be purchased in person at the Erie Otters front office located at 201 E. 8th Street in Erie, or by calling 814-455-7779. For the latest Otters news, visit www.ottershockey.com, or follow the team on Facebook (www.facebook.com/erieottershockey), Twitter (@ErieOtters) and Instagram (@ErieOtters).