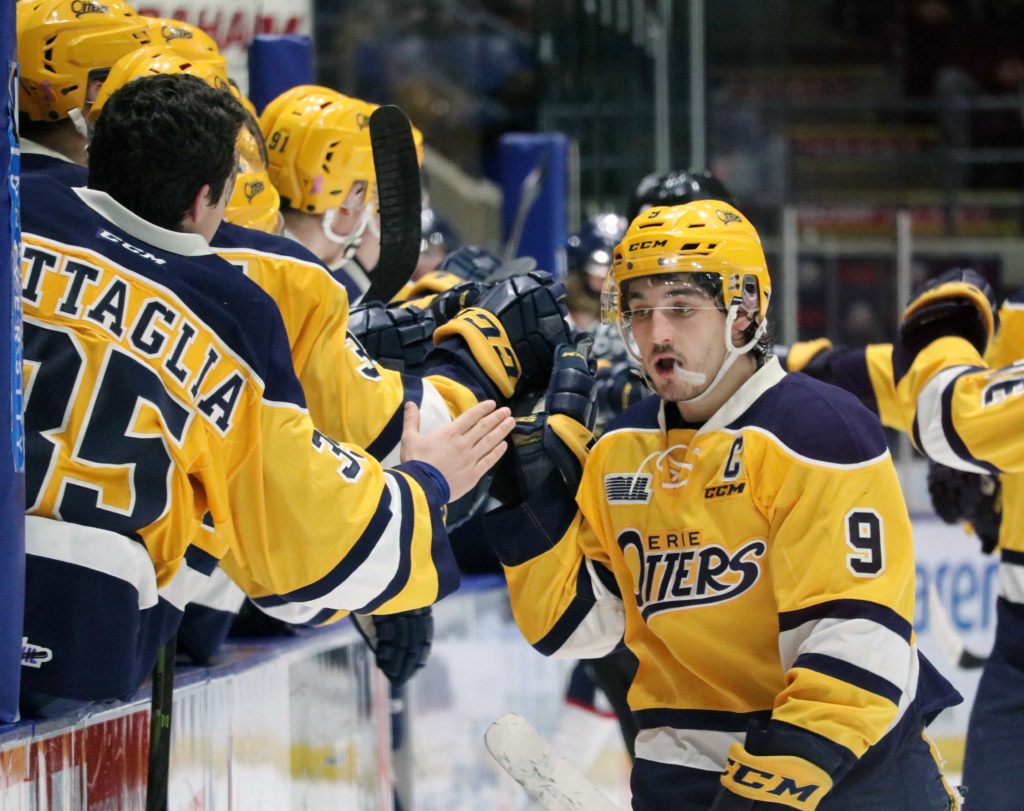 The Erie Otters defeated the Niagara Ice Dogs (22-8-6-0) by a final score of 6-3, handing the Ice Dogs just their third regulation loss at home this season. Maxim Golod stood out as the first star of the game, with two goals on the night.

The Ice Dogs opened the scoring just under five minutes into the first, from Kirill Maksimov. However, the Otters answered back just minutes later, and would go on to score the next three goals, unanswered. Maxim Golod put the Otters on the board with a beautiful goal, splitting the defense and slipping the puck under Niagara goaltender Christian Sbaraglia’s pads with a quick deke to tie at 1-1. Golod has averaged over a goal per game in the last ten matchups. Brendan Hoffmann scored late in the 1st to give the Otters a one-goal edge heading into the middle frame.

Former Ice Dog Danial Singer scored his 10th of the season just 50 seconds into the 2nd, to make it 3-1. Four minutes later, Maxim Golod netted his second of the game for a commanding 4-1 lead over the Central Division leaders, effectively chasing Sbaraglia from the Niagara net in favor of the more experienced netminder, Stephen Dhillon. Just over halfway through the game, Brendan Sellan took a Slashing penalty, sending the Ice Dogs to the power play. Philip Tomasino scored on the man-advantage to make it 4-2. The game became somewhat chippy towards the end of the period, with the Ice Dogs garnering some PP time to start the 3rd after a Slashing penalty against Erie and a pair of coincidental Roughing minors.

The Otters effectively killed the penalty time off to start the final period, but the Ice Dogs managed to score regardless just 30 seconds after getting back to even strength, 4-3. This would be their last goal of the game. The Otters took control for the remainder of the game, with captain Kyle Maksimovich scoring a power play goal 5:44 into the 3rd to restore their two-goal cushion. The Otters killed off a penalty on Ryan Martin for Holding, with Chad Yetman even producing a great shorthanded attempt, stopped by Dhillon. Petr Cajka scored a final power play goal for the Otters with under 6 minutes left in regulation to seal the deal at 6-3.

The Otters badly outshot a depleted-looking Ice Dogs team by a final tally of 51-23. Penalty minutes were even at 8 minutes a piece. Niagara associate coach Jody Hull commented on the outcome that, “Every time you play Erie it feels like it’s a bit of a grind, and a bit of a playoff atmosphere.” The Otters are eager to get back into playoff contention after narrowly missing last season, and they proved their grit and determination in this game in Niagara, playing a full 60 minutes of hockey, collectively. The Otters’ win tonight was well-deserved.