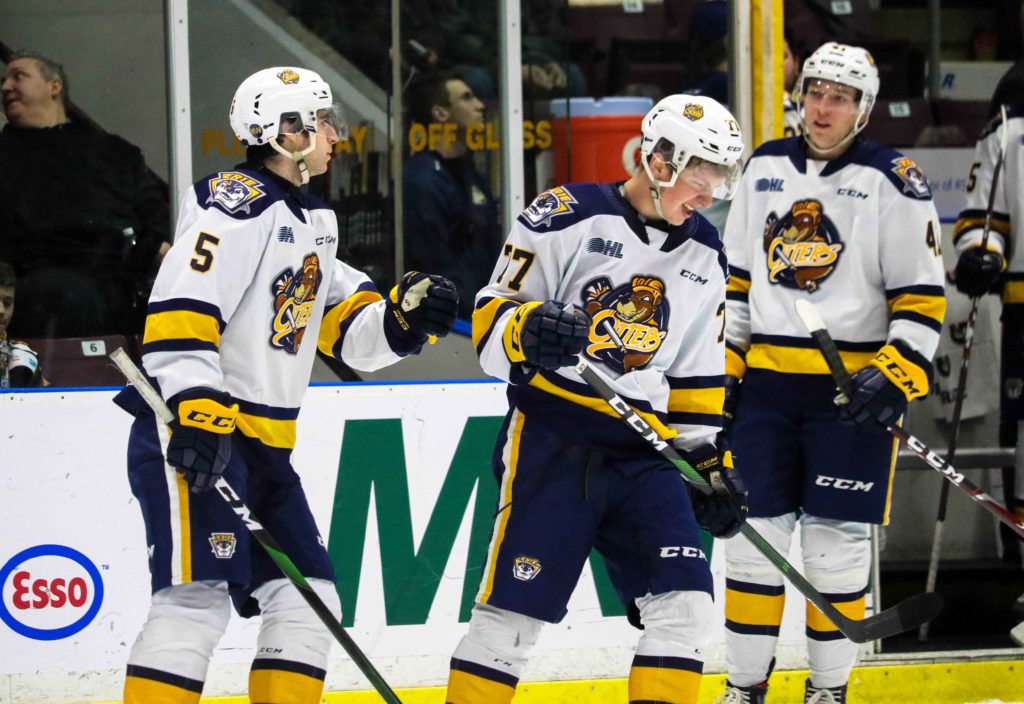 Erie, Pennsylvania – The Erie Otters overcame three three-goal deficits to secure two points in their playoff race with a 6-5 shootout victory over the Oshawa Generals at the Erie Insurance Arena Saturday.

The Generals jumped to an early lead, courtesy of Philip Tomasino. The Oshawa forward gained the zone and did a 180-degree spin, then he spun back toward the net and fired the puck into the top right corner four minutes and 35 seconds into the game. The Generals took a 2-0 lead at the 16:25 mark of the frame when Brett Harrison finished a 2-on-1 breakaway after receiving a cross-slot pass from Jacob Winterton. Each of Erie’s six shots was stopped and the Otters went into the intermission trailing 2-0.

The Generals attempted to run away with the game, and Ryan Stepien found himself in the right place to bury a loose puck in front of the net just two minutes and 34 seconds into the middle frame. Chad Yetman answered for the Otters and scored a shorthanded, breakaway goal at the 7:51 mark of the stanza. Just as momentum seemed to be shifting toward Erie, Oshawa regained the man advantage and scored on the same powerplay, 30 seconds later. The Otters regained their stride down the stretch, and Kurtis Henry scored his eighth goal of the season with just over five minutes remaining in the second. Henry took a slap shot that was initially stopped by Zachary Paputsakis, but the Oshawa goaltender did not completely cover the puck. Connor Lockhart poked the loose puck to an open wing, and Henry jumped into the play to capitalize. Despite the strong pushback, Erie went back into the intermission with another two-goal deficit.

Oshawa opened the final regulation period with a powerplay goal from Oliver Suni at the 2:12 mark to make the game 5-2, but once again, the Otters had an answer. Just 54 seconds later, while the Generals tried to gain possession on a delayed penalty, Yetman circled the net and buried a wraparound for his second of the night. Nearing the halfway point of the period, Emmett Sproule pulled the Otters to within one, completing a scramble in front started by Austen Swankler’s steal in the offensive zone. Brendan Hoffmann brought the crowd to its feet when he tied the game 5-5 with three minutes and 32 seconds remaining in the third period, when Jacob Golden found him in the slot for a one-timer. Erie held on to the tie by killing off a penalty in the final minutes of regulation.

The goaltenders stole the show in overtime with Murphy and Paputsakis playing their best to get the game to a shootout.

Tomasino opened the scoring before Jamie Drysdale scored on his first career shootout attempt. Murphy stopped Harrison and gave Maxim Golod the opportunity to complete the comeback with his five-hole shootout winner.

The Erie Otters will look to build on Saturday’s gutsy win when they visit the Mississauga Steelheads Monday, February 17, for a 2 p.m. matinee at the Paramount Fine Foods Centre.