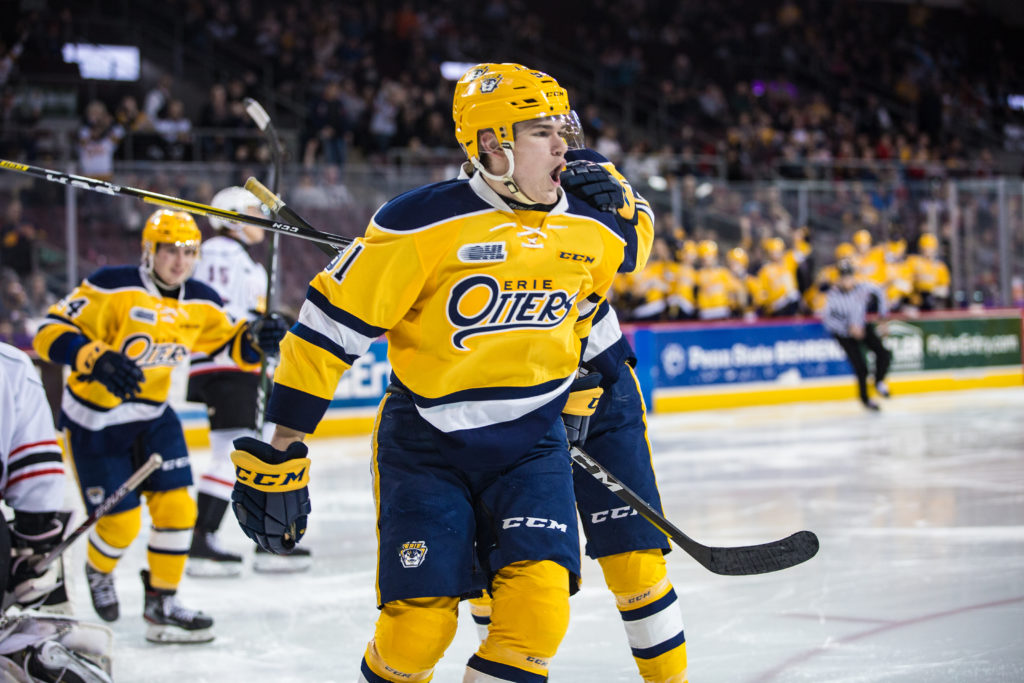 Erie, Pennsylvania – The Erie Otters scored two goals in the third period but fell 4-3 to the Owen Sound Attack Saturday night at the Erie Insurance Arena.

Neither team found the back of the net through 20 minutes, but each had its chances. Seven minutes into the game, Chad Yetman was stopped on a breakaway by Owen Sound goaltender Mack Guzda. At the other end of the ice, Aidan Campbell made a great glove save on Matthew Struthers’ backhander from the slot to keep the game tied in the final minutes of the period.

Brendan Hoffmann broke the ice just 31 seconds into the middle stanza when he followed his own shot from the right circle to the net. Hoffmann sent the rebound over the blocker of Guzda with a backhanded shot for his tenth goal of the season. Kaleb Pearson tied the game at the 5:45 mark after some puck luck allowed his pass from behind the net to bounce in off an Erie leg. Minutes later, Pearson found himself all alone in front of Campbell and sent a backhand shot through the five-hole to give Owen Sound a 2-1 lead. The Attack stretched the game to 3-1 with under five minutes remaining in the second when Kaleb Lawrence tapped in a pass on the back door.

Owen Sound added to its lead with an Andrew Perrot goal just three minutes and 42 seconds into the final frame. Perrot joined a rush to create a 2-on-1 chance and found the back of the net with a backhanded shot from the left circle. The Otters began to rally when Connor Lockhart tipped in a Kyen Sopa powerplay shot from the blueline at the 4:58 mark. Brendan Sellan busted in on the righthand side after receiving a pass from Lockhart and sent a backhander through Guzda to pull Erie within one. The Otters got the extra attacker on the ice late but could not find the back of the net for the equalizer.